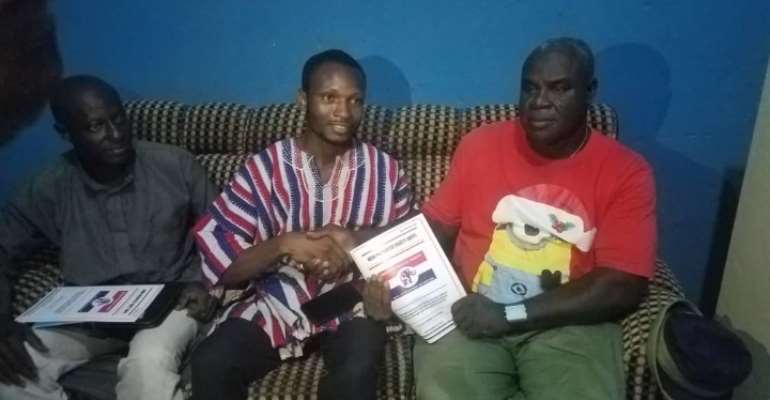 A Former Students' Representative Council (SRC) President of the University for Development Studies (UDS)-Tamale Campus, Raphael Kumah Abolasom has picked nomination forms to contest in the impending primaries on the ticket of the New Patriotic Party(NPP) as Parliamentary Candidate for the Bole-Bamboi Constituency in the newly created Savannah Region of Ghana.

Raphael, who started his political career and journey at UDS, was an active and key member of the Tertiary Education Students’ Confederacy of NPP (TESCON-UDS CHAPTER), an organ under the Youth Wing of the party. His immense contribution to TESCON and the NPP, in general, cannot be overemphasized.

As a writer, he has written several articles to project the works of the NPP which earned him a membership of the NPP professionals for change, an advocate group of professionals who worked tirelessly to ensure victory for the ruling party through its various health outreaches and door to door campaigns in the Brong Ahafo, Northern and Ashanti Regional Chapters.

Raphael’s contribution and involvement in the NPP has always been about the people and as a grassroots person, he again is the youth Organizer for Bamboi Zongo polling station and is an integral member of the NPP medical team in Brong Ahafo Region.

Speaking to the media on the theme; "CHAMPIONING THE COMMON CAUSE OF BOLE-BAMBOI, RAPHAEL KUMAH ABOLASOM AS THE TOOL” he said "It is often said that without money you cannot do politics. However, I am of the view that without the people you cannot do politics. You are the people, and you are my focus. Constituents of Bole-Bamboi, we have come a long way with an unbridled loyalty to the NDC yet there is nothing to show for it!

He added that the time has come for Ghanaians to change the narrative and entrust power in to the hands of the Akufo-Addo led government.

"To change the narrative, we need a strategic candidate, one appealing enough to obvious diversity, capable of bringing everyone on board- the young, the old, men and women, no matter the tribe. I hereby present myself to the good people of Bole-Bamboi to be used as the agent to pursue this agenda." he emphasised.

He, however, pledged his total commitment to making Bole-Bamboi one of the best regions in the country.

He said" I come to you with nothing, but to be used as a tool to advance the cause of our collective progress. Let us make this choice and deliver the seat to the NPP. We can and we will do it together. New face, new hope; time for the NPP to take over! It is possible”.

He finally called on all eligible delegates in the Bole-Bamboi Constituency to come out in their numbers on September 28th, 2019 to vote massively for him and endorse his candidature as he will never let them down.