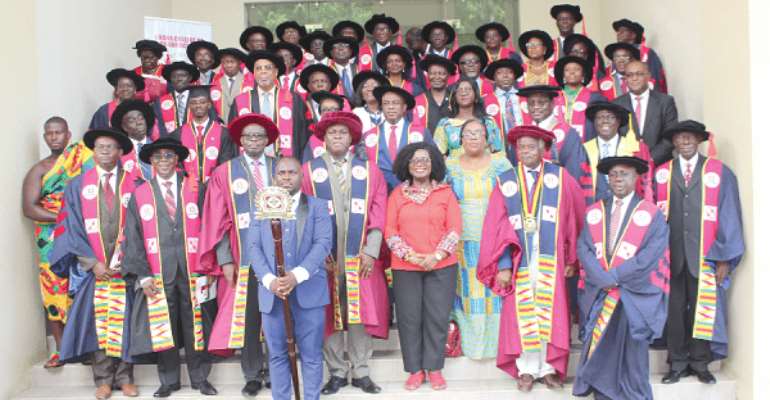 The Minister of Health, Dr Kwaku Agyeman-Manu, has called on the Ghana College of Pharmacists to train more specialist pharmacists to promote access to and proper use of medicines at the community level.

According to a speech read by Dr Martha Gyansa-Lutterodt, part of the governing council of the college, on his behalf at the ceremony to officially induct the members and open the 4th Annual General Meeting (AGM) of Fellows of the Ghana College of Pharmacist in Accra, he sent his appeal.

He explained that, “Specialist community pharmacists can drive down the burden and cost of non-communicable diseases by helping affected patients to access safe and effective medicines at the right costs,” he said.

Mr Agyeman-Manu said if the Ghana College of Pharmacists put emphasis on the training of such specialised pharmacists, they would assist in providing counselling on family planning, vaccination and immunisation.

The Minister also encouraged pharmacists in the country to go through the Drug Production and Quality Assurance programme of the college to help the country reduce its heavy dependence on imported medicines.

Ceremony
The President of the college, Professor Eric Woode, explained that the 16 pharmacists had completed their three-year primaries and residency programmes by coursework.

During the same ceremony, 50 pharmacists who had distinguished themselves and made significant contributions in the field of pharmacy in the country were also inducted into the college as fellows.

Among them was the Chairman of the Council of the Ghana College of Nurses and Midwives, Mr George Kwabena Abankwah-Yeboah.

The meeting was on the theme: “Universal Health Coverage (UHC), Service Provision and Financial: now and the future”.

Touching on the AGM, Professor Woode, expressed the hope that suggestions made at the meeting would help address some challenges, including infrastructure and finance of the college.

Rector
The acting Rector of the college, Mr Benjamin Botwe, urged registered pharmacists to upgrade their knowledge and skills by enrolling in any of the six faculties of the college.

He called on the members, fellows, staff and students of the college to support the college’s governing council to achieve its mandate of producing qualified pharmacists.

The Chairman of the Governing Council of the college, who is also the Akwamuhene, Odeneho Kwafo Akoto III, promised to use his experience as a traditional ruler and a qualified health service administrator to move the operations of the college to another level.

“Inasmuch as council will attempt to seek resources from elsewhere to provide for some of these, we shall be grateful for full support from the minister’s office in order to build upon it from other sources,” he noted.

UHC
In separate presentations, the Executive Director of the National Health Insurance Authority (NHIA), Dr Lydia Dsane-Selby, encouraged pharmacists to upgrade themselves, saying they had a major role to play in achieving Universal Health Coverage (UHC) across the country.

A principal advisor with the Management Science for Health’s Medicine, Technologies and Pharmaceutical Services (MTaPS) programme based in Virginia-USA, Dr Emmanuel Kwesi Eghan, said the country must consider the structure of the economy, rate of economic growth and the ability to administer the NHIS as some factors to achieve UHC in the country.

It serves as the only institution mandated to offer practising pharmacists the opportunity to undergo both theoretical and practical hands-on training to become specialists and experts in their field of practice.

The structure of the college programme is made up of two major courses - memberships and fellowship - and it has six faculties, namely Clinical Pharmacy, Community and Family Pharmacy, Drug and Health Medicine Production, Quality Assurance, Social and Administrative Pharmacy, and Public Health Pharmacy.