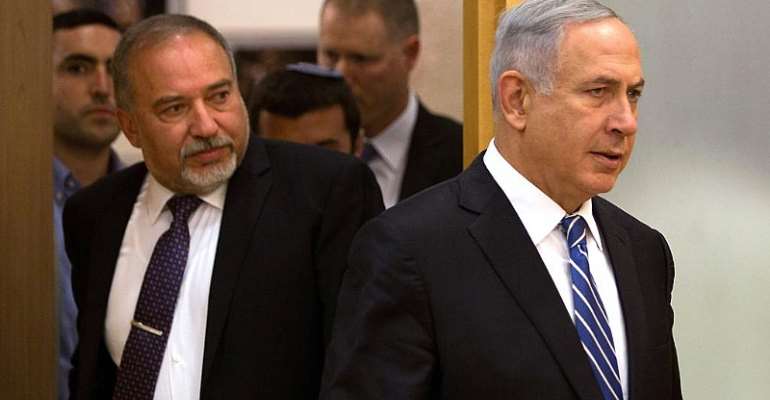 With hours to go before a midnight deadline to form a coalition, Israel's Prime Minister Benjamin Netanyahu struggled Wednesday to reach a compromise between religious and nationalist parties. Missing the deadline, could see Israel head back to the polls in September, just four months after the last election.

Hailed affectionately as "King Bibi" by his devotees for his shrewd thinking, Netanyahu this time seems to have met his match.

The man at the centre of his coalition-building crisis is former Defense Minister Avigdor Lieberman.

He has refused to budge on a draft bill to conscript ultra-Orthodox Jews into the military. Ultra-Orthodox parties have vehemently opposed the legislation.

"It's a hot issue," explains Avraham Diskin, an Associate Professor for political science at the Hebrew University of Jerusalem.

"Many people say it's not fair you know. These people don't serve, we serve, we risk our lives," he told RFI.

Lieberman's ultranationalist secular party, Yisrael Beiteinu, has championed the cause of military service for all as a rallying cry. He is "not ready to change even one punctuation in that [military] law," adds Diskin.

The problem is that Netanyahu's conservative Likud party, which won 35 seats in the April 9 election, needs both the ultra-Orthodox parties, Yisrael Beiteinu and two other parties to assemble a 61-seat majority.

Compromise fading fast
"In the past, Netanyahu was successful in pressuring everyone, every potential partner until the very last minute," continues Diskin. "This time it looks almost impossible."

With prospects for a compromise fading fast, political commentators suggest that Netanyahu would instead focus his efforts on enlisting the 61 votes needed in parliament to approve a new election.

However, this strategy too carries risks. "If he doesn't reach an agreement on early elections in the Knesset, then it all goes to the president and the president is allowed to nominate another Knesset member to form a new government," explains Diskin.

President Reuven Rivlin, who holds largely a ceremonial role, has a rocky relationship with Netanyahu. However, analysts reckon that he is weary of new elections so soon after the last one.

"To have two elections in one year is unprecedented," admits Diskin.

Pressure is on
Netanyahu, who is on track to becoming Israel's longest serving prime minister this summer, is also the first to face possible criminal charges while in office.

He faces indictments for bribery, fraud and breach of trust in three cases, although denies any wrongdoing.

This notwithstanding, the main opposition Blue and White party, has refused to get into bed with Likud unless Netanyahu's immunity is removed.

The Prime minister's associates have reportedly told the premier that snap elections would likely deny him the time needed to pass legislation shielding him from prosecution in the three corruption cases, ramping up the pressure.

"He really doesn't crack that easily under pressure," commented Diskin. This time could be different. "We will have to wait and see whether the pressures now are beyond his power," he said.