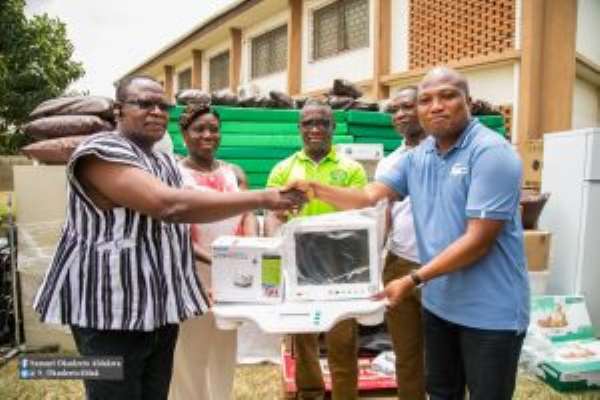 Mr. Okudzeto Ablakwa also supported the Hospital to expand the children’s ward to include a fully furnished in-house mothers’ hostel.

The presentation was climaxed with a party for children on admission and others in the Bator Township to mark the Easter celebrations.

The MP said the gesture was to boost the recovery process of children on admission and to “return North Tongu’s love for me.”

Mr. Okudzeto Ablakwa said the donation was to improve quality healthcare delivery and inspire health workers at the Hospital to continue to give their best to clients.

He commended staff of the Hospital for exhibiting professionalism over the years, which he said had made the facility one of the best in the country and therefore marketing the District.

“I am doing all these because we are proud of the excellent healthcare services you offer here. The testimonies are unanimous. There are no issues of negligence. No poor treatment. So, this is to encourage you to keep up the good work,” the MP stated.

Dr. Hayford Atuguba, Medical Superintendent of the Hospital, said the donation was the second major support given the facility by Mr. Okudzeto Ablakwa after a similar presentation which included incubators in 2017, and said the Hospital was eternally grateful to him.

He said the Hospital served Volta, Eastern, and Greater Accra Regions with some patients coming from neighbouring Togo and Benin and expressed gratitude to the MP for responding to their needs.

Dr. Atuguba said situations, where mothers during Kangaroo Mother Care (KMC) slept on the floor, was over with the presentation of mattresses and beds to the unit.

He said the Hospital was also happy to have weighing scales for preterm babies, monitors for the emergency ward and televisions.

The children had a lot to drink and eat and engaged in fun games. They also received gifts from the MP.