Christianity and the Gold Coast Society. 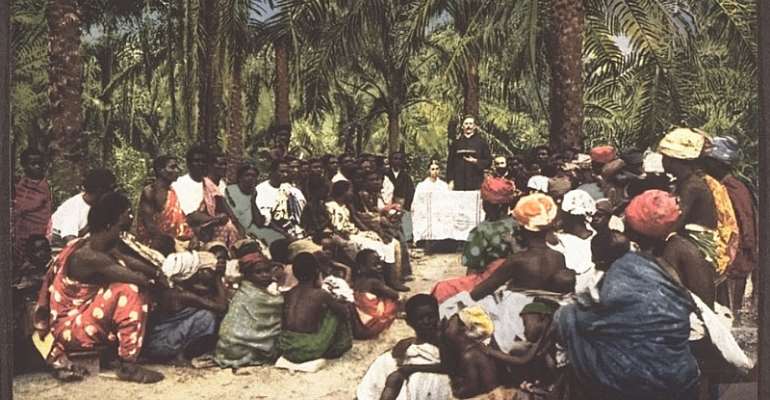 Three boys from Cape Coast were sent to England by Rev. Thomas Thompson. Two kicked the bucket, but the third, Phillip Quaque, became the first African to work in the Anglican Church, and returned to the Gold Coast in 1766 to work on the establishment of a missionary enterprise, for the next fifty years. But he barely managed to attain any influence outside the fort in Cape Coast.

The aristocrats launched a staunch resistance to this alien culture, especially in Ashanti. The first Basel evangelist to visit Kumasi returned with the impression that ‘we had to wait for better hints from the Lord'. (Letter of 18 Dec. 1877, from the Rev. F. Ramseyer to Freeling, referring to the journey to Kumasi in 1839 by the Rev. A. Riis; CO/96/122.)

Despite the cordial relationship between the Asantehene and Rev. T. B. Freeman from 1839 onwards, the Mission house eventually fell into disuse. In 1841, for example, Freeman accompanied John Osoo Ansah and William Inkwantabissa (two Ashanti princes who had been sent to England ten years previously) on their return to Kumasi, and presented the Asantehene with a wheeled carriage from the Wesleyan Missionary Society.

But when the Wesleyans sought permission to resume residence and start schools, they were told: 'We will accept the Mission, if you act as Mr. Freeman did to help the peace of the nation and the prosperity of trade, but you must understand, the bible is not a book for us. We will never embrace your religion.’ (Quoted by G. G. Findlay and W. W. Holdsworth, The History of the Wesleyan Methodist Missionary Society).

After 3 years, the Basel Mission opened sixteen centres in Ashanti, with a total of 164 church members and 451 scholars. The Wesleyans had 1,500 church attendants and 675 scholars, in eight centres.

The Ashanti revolt in 1900, however, led to the destruction of most churches and missionary enterprises. This was an inevitable reaction to the assumption by missionaries that European civilisation, as well as the Christian religion, was superior to anything that could be discovered in Africa.

Christianity was regarded as ‘White Man’s Fashion’ and its great expansion in modern times has been due to the unparalleled expansion of the white race.

The missionary enterprise took some steps to alter this perception. The Rev. A. Riis travelled to Jamaica and, in 1843, brought back twenty-four immigrants, including six couples with their children. Most of these immigrants came to form the nucleus of the Christian community, in places like Akropong where, in 1851, a total of thirty-one, twenty-five were West Indians, intermarried with local families.

The Basel mission preferred to draw their converts into a new community life physically distinct from the old. Joseph Boakye Danquah blamed them for creating a gulf between Christians and non-Christians. In Akim Abuakwa the Mission station itself was christened Oburoni-kurom, or 'the white man's town'. A major source of friction was the idea that 'Christians were those who were free of the restraints and taboos of the heathen town, and, as they thought, of the authority and rule of princes of this earth'. (J. B. Danquah, The Akim Abuakwa Handbook)

In Akwapim there had even been an early suggestion that the Basel Mission should nominate a native Christian Headman to sit in local court at Akropong. In 1887, the traditional elders wrote to the colonial government: 'Now we tell you plainly that we were here before Mohr came, we do not want him or any of the Christians who refused to act in accordance with the traditional law and made themselves generally obnoxious', and they attributed the death of their paramount Chief to Mohr.

Nana Amoaka Atta, who had been deported to Lagos in 1880, returned in 1884 determined to suppress Christianity; he 'destroyed the plantations of the Christians, robbed and ill-treated them'. On his coffin his adherents swore to finish his work. (A. Jehle, 'The Story of the Basel Mission Work in the Gold Coast)

The Wesleyans decided, in 1885, that no member of the Church should be allowed to marry a heathen man or woman - an ideal that has never been realised in John Wesley's own nation - and that no woman church member should be admitted as a member of our Church, and it should be left with the superintendent minister to decide whether, on an investigation of the case, the wives of polygamists should be received into Church fellowship. (The Planting of Christianity in Africa, vol ii, 1954)

In 1893, the Methodist Synod decided to insist on the Christian rite of marriage for all its members. Those who were already married according to the traditional customs were to be received for membership, but only on 'the distinct understanding that they cannot pass beyond the trial stage until they conform to the Christian rite'.

The Presbyterians (who succeeded the Basel Mission after the First World War) agreed to recognise marriages already contracted by their members according to native customary law, and in 1927, an optional service of blessing was introduced; marriages of church members to heathens were regarded as 'not expedient', but were not banned.

The church believed in playing drums to the glory of God. But they preferred European drums to African drums. Is God a European? E. Amu introduced African music into church worship while a teacher at the Presbyterian Training College, Akropong; this, he claims, was considered by the church authorities 'improper and unedifying', and he was consequently expelled in 1933.

Casely Hayford once asked a really important question, which is still relevant today: ‘Why, for example, should not the native convert sing his own native songs, and play his native airs in church? Why should he not attune his horns, his adziwa, his gomey, or for that matter, his adankum, to the praise of God, much as the Israelites of old praised Jehovah upon the cymbal and the harp? Why, in the name of reason and common sense, should the native bear his own name and wear his own native garments? Why, indeed, except that the simple missionary has, from the beginning, ruled that all these things are against the letter, if not the spirit, of the Gospel?’. (Gold Coast Native Institutions)

We’ll Bring All Our People On Board; Open Opportunities To T...
30 minutes ago