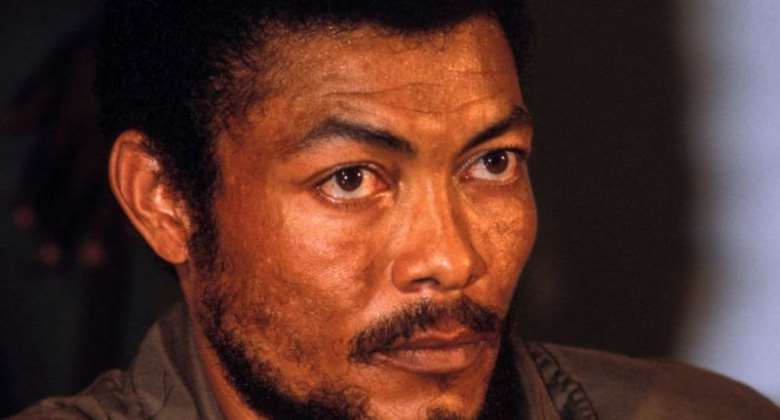 I had both hands firmly gripping the wheel and my foot on the accelerator pedal when I received a phone call, around 9:00am, on October 3rd 2019.

It came from Group Captain Richard Forjoe. He was brief and instructive. “President Rawlings would like to meet you later today” he said.

“Of course, I’m obliged. Please tell me exactly where and I’d be there” I spontaneously replied, even before he could provide further details. He then asked me to park outside Alisa Hotel, North Ridge, at 3:00pm and ring him.

Group Captain Richard Forjoe was a gentleman I was introduced to, by a close associate of his, in 2016. I had just completed my undergraduate studies in law and flirted with the idea of an adventurous career in the army as a war reporter; a rare experience I felt would be a useful prerequisite to an active life in politics.

Mr. Forjoe was generous enough to provide his counsel. He recommended I applied to work as a legal aide at the Ghana Armed Forces. I took his advice, followed through and joined the Directorate of Legal Services, Ghana Armed Forces for a few months. Three (3) years onward Mr. Forjoe had facilitated a meeting with the most accomplished soldier in Ghana’s political history, a young charismatic revolutionary that blossomed into a global statesman and became the architect of Ghana’s Fourth Republic.

After the phone call, I quickly took a detour to the beach near the Christiansborg Castle, just to process the moment. Initially, I struggled to put my finger on exactly what the occasion could be about. But it really didn’t matter; the stars had aligned and a fine opportunity had presented itself. I parked, stepped out of the vehicle, gazed at the sea for a while and took a stroll along the shore. I felt it was a great omen; a few hours from a milestone encounter. I took a long deep breath, kicked my shoes off, placed both feet in the sea water and said a little prayer. I could feel the wind at my back as I returned back to the car.

I arrived at the Alisa Hotel around 2:00pm on a hot afternoon; the sun was beaming and it was so humid it felt as though the entire city was in a three-legged coal-pot. Reggae was the most soothing remedy for the weird mix of anxiety, euphoria and discomfort. And so, I listened to Bob Marley to pass the time.

I called Group Captain Forjoe after an hour and informed him that I had arrived as scheduled. He dispatched a driver to fetch me from the location to the rendezvous. A black Mercedes Benz bus with tinted windows pulled up afterwards and I hopped in.

I sat quietly until we arrived at the destination. The driver then got out of the car and left the engine on. He didn’t say a word. I monitored the right-hand side mirror in suspense. After about a quarter of an hour, I could see a towering figure — clothed in a neatly pressed white linen shirt, black trousers and shiny boots — descending from the stairs in a majestic manner. It was H. E. Flt. Lt. Jerry John Rawlings. He took a brisk walk to the car.

President Rawlings opened the passenger’s side of the car door and assumed his seat. I was seated directly behind him. He asked that I move over to other side; behind the driver’s seat. I complied. He opened the glove compartment to inspect it, turned around to face me and the conversation began. I must admit I was star-struck. The circumstances under which the conversation took place was unique. I’d never anticipated such an intimate tête-à-tête with President Rawlings.

“Chief. I’ve heard some great stuff about you. And I’ve read some of your articles too. Good job! How are you?” he said. “Thank you very much for the kind words Sir. I’m not doing bad at all. How’s life?” I replied.

“Well, I am taking it each day at a time. I’d like to know what your thoughts are on where we stand as a nation” he said.

“I believe Ghanaians, especially the youth, desperately want a new style of politics” I said, then paused for a brief moment.

“The current political order has been nothing but an instrument of oppression and it’s only a matter of time until it crumbles.” I continued.

He listened, as I spoke, without interrupting. We looked directly into each other’s eyes. The world paused for us two. It was a surreal moment. It seemed almost spiritual. Rawlings wasn’t the least bit intimidating.

He then gasped and looked up. His facial expression almost immediately changed after. “You know it’s really sad and it hurts. After all the tough sacrifices we made to salvage what was left of this nation, we’re still so far from moral uprightness and social progress” he bemoaned.

The emotion with which he spoke was overwhelming. He sounded like an idealist consumed by pain who struggled to cope with reality. Then he started to shake. Rawlings gripped the seatbelt handle very tightly for about half a minute. He had droplets of sweat on his forehead and looked really distressed.

“Chief, what are the chances that a new force could emerge in our national politics?” he asked.

“For a new force to emerge, it’ll have to be powered by the youth, backed by the middle-class intelligentsia and funded by the masses,” I answered.

“But who has the courage to lead such a struggle and motivate the people?”, Rawlings leaned in much closer and whispered.

“It certainly would be a fearless young man, or woman, who would be moved by the hand of God and the spirit of nationalism at His appointed time”, I said.

“Currently, the bulk of young educated people with the capacity to not just lead a revolution but administer the Republic are ideologically aligned to the National Democratic Congress. And, Sir, these are also the calibre of people, mainly socialists and Pan-Africanists, that are keen on a radical movement to reshape our Republic. I’m afraid if there’s a third force, it’ll most likely divide the NDC and that’ll only inure to the benefit of the Danquah-Busia-Dombo tradition” I said.

“Forget the political elite and its traditions. Isn’t there a way to bridge both the base of the NPP and NDC, you know, especially the grassroots?” he probed.

“The NPP-leaning youth are hoodwinked by a deadly mixture of tribalism and a false sense of elitism. They believe more in the targeted success of the educated salariat or entrepreneurs rather than the general welfare of the community” I replied.

“The revolution is inevitably going to come from within the NDC. Its values and principles will then seduce the capitalists and lure them across the carpet. The soul of Ghana is wrapped in socialism.” I insisted.

“The answer must come from you, my friend. These are the things that should keep you up at night. Chief, always ask yourself whether your actions are in the interest of Ghana or if it benefits just you.” He answered.

“Well, Chief, it’s been a pleasure meeting you. I look forward to more of such conversations” he said.

“Pleasure to meet you too, Sir”. We parted with a firm handshake.

“Your hands are soft. Goodness gracious, you’ve never done any chores before have you?” he remarked with laughter. This was my personal experience with Jerry John Rawlings.