K. A. Gbedemah – A Political Colossus 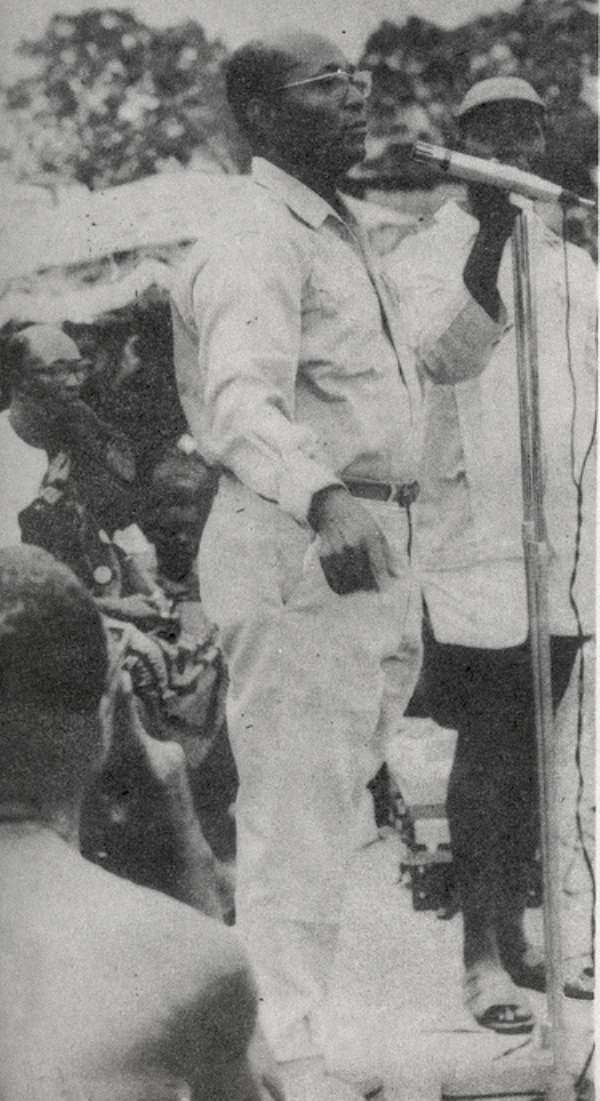 Komla Agbeli ‘Afro Gbede’ Gbedemah of Anyako was a revolutionary youth activist and an iconic statesman who, as a senior architect of both the modern Ghanaian state and Republic, played a critical role in shaping the political landscape of our nation for decades. He is widely recognised as the mastermind who propelled the image of Kwame Nkrumah - the father of Pan-Africanism - to national attention.

Gbedemah understood the chess of the old guard, perhaps, better than most of his contemporaries, shrewdly manoeuvring his way through a muddled political arena and maintaining a position of power on the chessboard until the very hour he kicked the bucket.

K. A. Gbedemah was born on 17 June 1913 at Warri, Nigeria where his father, Awumee Gbedemah, plied his trade as a Government Pharmacist, and was raised between Cape Coast and Keta in the Gold Coast. His early childhood experiences brought invaluable exposure to Afro Gbede about life in British West Africa, since he had been domiciled in four typically colonial cosmopolitan cities, namely Warri; Keta; Cape Coast and Accra, by the age of 10.

Afro Gbede’s formal education began at the Local Roman Catholic School, Keta before he relocated to Accra in 1923 to live with his uncle, Carl Dey, an educationist who served as master at the Government Teacher’s Training College.

Gbedemah’s father had him enrolled at the SPG Grammar School upon the recommendation of the principal, S. R. A. Nicholas. He sat the Junior School Certificate Examination while schooling here and was awarded the King Edward XII scholarship to attend the elite Prince of Wales (Achimota) College, where he further obtained a Bachelor of Science degree.

Upon completing Achimota, Afro Gbede had set his eyes on a career as a medical practitioner but failed to obtain a scholarship to support him advance his career. But as a well-connected pioneer old boy from the prestigious Achimota College, the future was not at all dim.

He gained employment shortly after as the proof reader and, subsequently, editor for Times of West Africa; a newspaper owned by the illustrious J. B. Danquah, a man of letters.

Gbedemah developed his craft as an all-rounded communicator during his time as an apprentice of J. B. Danquah and became abreast with current affairs and popular culture. An unusually industrious young man, even by the standards of your quintessential workaholic, with an appetite for venture capitalism, Afro Gbede soon set up a number of successful enterprises and earned a decent living for himself before getting involved in Gold Coast politics. His former boss, J. B. Danquah, had served as Secretary of the Ghana Youth Conference from 1937 to 1947.

Afro Gbede established timber and construction businesses which supplied material when edifices such as the Accra Airport, 37 Military Hospital and Accra Sports Stadium were being built. He also worked with multinational corporations such H. B. Green, a European building firm headquartered in the capital of the Gold Coast.

Gold Coast & Ghanaian Politics
In 1941, aged 28, Gbedemah settled down and tied the knot with Adelaide Plange in a beautiful marriage ceremony. Seven years later, in August 1948, Gbedemah who had become a member of the United Gold Coast Convention (UGCC) — a conservative political organisation of which his former classmates William Ofori-Atta and Edward Akufo-Addo were members — was appointed as Chairman of the Convention Youth Organisation, the youth wing of the UGCC, with Kojo Botsio serving as its Secretary.

When Nkrumah arrived in the Gold Coast, on 16 December 1947, upon the invitation of J. B. Danquah, to become the General Secretary of the UGCC, Gbedemah was the one who warmly received him on behalf of the organisation. They were both awakened to the fact that the political history of Ghana had changed forever upon encountering each other and committed themselves to building a modern democratic Republic.

Gbedemah and Nkrumah stood for universal adult suffrage and valued self-determination. They did not agree with the political position that the UGCC had taken with regards to the system of democracy were a select-few aristocrats and a handful of the intelligentsia would be appointed to the Legislative Assembly, as the chosen political representatives of the Gold Coast, through some form of elitist electoral college that excluded the general mass of the people.

Nkrumah and Gbedemah, together with Kojo Botsio, would form a triangular brotherhood that lasted for decades without decay, until it was strained by unforeseen and regrettable circumstances.

On 12 June 1949, when the mass-based Convention People’s Party was established, Gbedemah was appointed as its first Vice-Chairman. As an exceptionally media-savvy and politically conscious man, he had also become the ideal candidate to run the propaganda machinery of the CPP –– the Accra Evening News; a daily Newspaper founded by Osagyefo Dr. Kwame Nkrumah in 1948 to mobilise the masses for the task of nation building.

Afro Gbede's fiery posts in print press landed him in jail at the James Fort Prison from October 17, 1949 to March 2, 1950 for “publishing false news likely to cause harm”. A naturally gifted propagandist with a flair for politics, he introduced the Prisons Graduate Cap (P. G. Cap) so that politically active citizens who had been imprisoned for positive action would be celebrated with this special cap. It represented honour and prestige within the ranks of the party.

Kwame Nkrumah, who also ended up in jail, sent a number of communiques to Gbedemah which were written on toilet paper and smuggled out of the Ussher Fort prison. Nkrumah had secret plans to contest the Accra Central electoral district seat and placed his full dependence on Gbedemah to manifest his political ambitions.

In a strategic move to protect Nkrumah’s seat, and as a diversionary tactic, so that the colonial administration could not anticipate Nkrumah’s next move, or worse of, disqualify Nkrumah from the election, Afro Gbede decided to front as the candidate for the seat. He only substituted his name for Nkrumah’s at the very last hour. And as a result, Nkrumah's intention to contest the seat in the 1951 Legislative Assembly took everyone by surprise. The plot was successful and Nkrumah won his seat. Gbedemah had opted for a seat in the Keta constituency instead and was elected to the Legislative Assembly himself too. On 8 February 1951, K. A. Gbedemah was appointed by Nkrumah, who by then had become the first African Prime Minister, as Minister for Health and Labour.

Afro Gbede also served in two different cabinet portfolios between 1952-1954. In 1952, Gbedemah opened the first clinic in Accra near the Palladium Cinema Hall. He also set up the Sir John Maude’s Commission in 1952 to lay the foundations for an improved and progressive health service.

In 1954, at age of 41, K. A. Gbedemah shattered the age-old status quo and became the first African in post-colonial Africa to hold the position of a Finance Minister. In his first budget speech, in July 1954, Afro Gbede paid tribute to his predecessor Kenneth Tours. He also signed the contract that introduced Ghana’s first currency – the Ghana Pound Sterling – and set out to create an atmosphere where indigenous businesses could thrive. Gbedemah pushed for the representation of Africans in the International Monetary Fund, which eventually led to the formation of an African Department, administered by Africans. And from 1952 – 1961, he made 23 trips to Europe and America to discuss the Volta River Project.

Gbedemah, together with Kojo Botsio, flew to London in 1957 to deliberate with the British Foreign Minister, Lennox Boyd regarding full self-government. Prince D. K. T. Djokoto –– a royal, pioneer Ghanaian diplomat and judge –– had also been appointed by Kwame Nkrumah, as Second Secretary of Foreign Affairs at the Ghana High Commission, was closely involved in the final negotiations, together with Gbedemah and Botsio, before Ghana was granted its independence on March 6, 1957.

Gbedemah soon fell out with Nkrumah and was asked to leave his cabinet in 1961. He returned to Ghana on June, 16 1966, 114 days after the overthrow of Nkrumah. He later founded the National Alliance of Liberals in 1969 which contested elections, winning 29 out of the 140 of seats in Parliament. The Progress Party (PP), led by K. A. Busia, won 69 seats.

K. A Gbedemah won a seat to Parliament, on the ticket of the National Alliance for Liberals, to represent the Keta Constituency. However, the Progress Party using the controversial Article 71 of the 1969 constitution, which disqualified persons against whom had adverse findings had been made by Commission of Enquiry from holding public office, had him disqualified from Parliament. He, therefore, could not take up his official position as the Leader of Opposition.

In 1972, when the PP Government of Prime Minister Busia was overthrown, Gbedemah was appointed as Ambassador Plenipotentiary, a position he held from April – June 1972. But as a staunch democrat, he also disagreed with the style of governance that National Redemption Council (NRC), and later (SMC) had adapted and started demanding a return to civilian rule; calling for an end to military dictatorship.

Gbedemah also formed Popular Movement for Freedom and Justice (PMFJ) with William Ofori-Atta, Lt. Gen A. A. Afrifa, Victor Owusu, Professor A. A Boahen, K.S.P Jantuah and others.