Re: Honourable Mark Owen Woyongo Must Be Called To Order 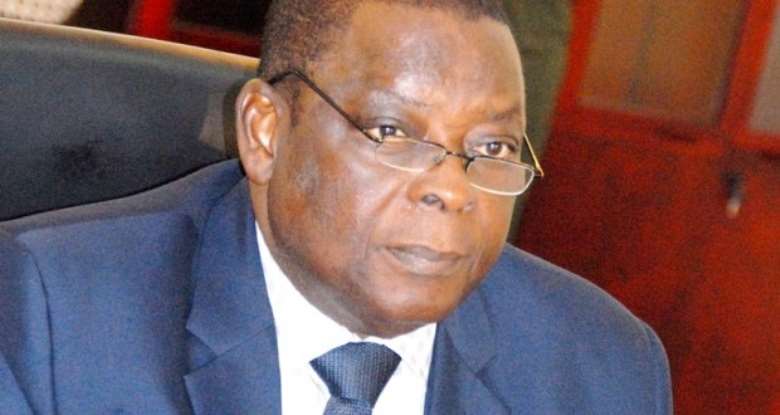 I have read with distaste a disingenuous and grammatically incoherent writeup entitled "HONOURABLE MARK OWEN WOYONGO MUST BE CALLED TO ORDER " in which the cowardly writer sought not only to besmirch the hard earned reputation of Hon. Mark WOYONGO with a whole slew of lies but also to throw dust in the eyes of the Public.

The writer starts his jabberwocky with the baseless assertion that "The former President of the Republic of Ghana His Excellency John Dramani Mahama created a very conducive environment for Honourable Mark Owen WOYONGO above any other Minister yet due to his lose talks and greed lost the seat to Honourable Kofi Adda." This averment, to say the least , is downright balderdash and uneducated. What would be the rationale behind such a decision by the former president to create a conducive environment for Hon . WOYONGO above the other Ministers? Which President who is worth his salt would deliberately create bad blood among his cabinet by giving just one Minister the congenial environment to operate and not the others. His Excellency John Mahama is an astute politician, a team player who created the congenial climate for all his Ministers to bring their ideas to bear on his overall development agenda. Try as hard as I may, I have not been able to bring myself to comprehend what the writer means when he claims the NDC lost the Navrongo seat "due to his lose talks and greed". If there is one person that oozes generosity and who is decorous in speech and attitude , then that person no doubt is Hon. Mark WOYONGO.

Indisputably, apart from Hon. John Achuliwor of blessed memory, there is no member of Parliament of Navrongo's descent who can hold a candle to Hon. Mark Woyongo as far as the spirit of philanthropy and magnanimity is concerned. Apart from the utilization of his share of the MPs common fund for the payment of fees for brilliant but needy students, Hon Mark Woyongo has been drawing from his personal resources to foot medical bills , pay school fees and assist people to overcome one adversity or the other.

Permit me to state further without mincing words that the strenuous attempt by this two faced writer to pit President Mahama against Hon.Mark Woyongo by creating the erroneous impression that Hon . Woyongo disparaged President Mahama's policies as not being student friendly , won't wash. We , the followers of Hon. Woyongo are very much aware of the unflinching support and true blue loyalty of Hon Woyongo towards President John Mahama during and after the 2016 elections.

Interestingly , the writer of this junk of an article also makes the fictitious claim that the former Defence and Interior Minister has openly declared that he would campaign for a skirt and blouse voting if a certain candidate wins the Primaries. Ironically, the chickenhearted milksop has failed to name that candidate he alleges Hon. Woyongo is hell bent on campaigning against . Of course if that candidate is a mole in the midst of the NDC in Navrongo and whose activities in the past has detracted from our unity and strength as a Party why wouldn't we campaign for a skirt and blouse vote? Even though the writer hasn't got the guts to name that person he claims Hon. Woyongo has vowed to campaign against, we are not oblivious of the negative politicking that person did against his own Party out of greed and malice which ultimately affected our chances adversely in the 2016 elections. My piece of advice to that candidate and his ilk is that evil always has a boomerang effect , so as Peter Tosh once said "if you can't take blows , don't throw blows" ! Ostensibly, that nameless candidate is the one who should be avoided like the plague and who must be brought to order if the NDC in Navrongo is to win the 2020 elections.

Candidly, without the singular support of Hon. Mark Woyongo the NDC in Navrongo Central would have been in dire straits! In fact, I dare say that the unity of purpose and oneness among the genuine members of the NDC in Navrongo Central Constituency is inextricably linked to the instrumentality of Hon. Mark Owen Woyongo . He is the linchpin of unity in the Constituency. Indeed , for some time now the whole structure and activities undertaken by the NDC in a bid to get new members in the Constituency has been contingent on the support of Hon. Woyongo.

The acerbic language and downright insults directed at the person of the former Defence Minister instead of addressing issues on how to build a formidable NDC front in the Constituency is indicative of how uncouth, purposeless and petty this writer is.

Rather ludicrously, the writer also makes the fanciful claim that when President Mahama visited delegates in Navrongo, it was Hon Woyongo who prevented delegates from asking the former President questions as if the former President's schedule and decisions are decided for him by Hon. Woyongo. Under normal circumstances I wouldn't have deigned to use my precious time in responding to this tittle - tattle of an article simply because it is not worth the while of right - thinking Ghanaians. In fact, the article is a mishmash of gossip, hear say, vendetta and in essence impervious to reasoning and common sense!

I must add that even if Hon. Woyongo donated 500 cedis to support the project to build a Party office as the writer would want us to believe, then he has done a yeoman's job given the fact that resources already expended by the former Defence minister towards the Party's organization and its activities could build at least five of those offices! Building a Party office should be team work - Woyongo should not be the one to always bear the full cost of everything in the Constituency!

The writer in his idle jabber also opines that the former Upper East Regional minister and, Minister of defense never helped any youth in the Constituency and whines further that all protocol positions were sold out and that people were made to pay an upfront charge of 10% on any contract before it is given - And Jesus Wept!

I can personally list the names of several youth in the Constituency who are proudly strutting about in Military and Police fatigues thanks to Hon. Mark Woyongo. I can equally compile a tall list of young men and women who are plying trades in other professions such as Nursing and other fields of human endeavor courtesy Hon. Woyongo. Hundreds more have had the opportunity of continuing with their education due to the largesse of the former Law maker and many of them have expressed their gratefulness to him in various ways. Therefore ,this writer and his ilk of never - do - wells and their sponsors can continue on their delusory journey.

Of all the naked lies I have heard in this 2019 , the claim that people are made to pay 10% upfront by Hon. Woyongo before contracts are doled out to them takes the Cake ! Clearly, this writer is totally ignorant of the processes through which a contract is given and therefore should be forgiven and pitied and not condemned. Contracts do not belong to a minister to decide what to do with them. There are constitutionally laid down processes in awarding contracts. In any case since the writer has information to the effect that Woyongo has in the past indulged in this illegality why is he writing under a pseudonym ( to avoid prosecution?) and why hasn't he triggered processes that would make the former minister face his comeuppance? For the edification of this writer, one attribute of Hon. Woyongo which is unhidden and which has gained him commendations across board is his incorruptibility! Hon. Woyongo would not stoop too low as to take a bribe! Take it or leave!

The writer perhaps needs to see an opthalmologist to help remove the cobwebs from his eyes to enable him see the fact that every logistic needed to facilitate our campaign in 2020 was given to us by the former minister. Even today, the Party is depending on some of his logistics such as cars, moto bikes and bicycles to still organize in the Constituency.

It is disheartening and disturbing in deed to note that this writer who claims to be a bona fide member of the NDC is belittling the awesome contributions of both comrade Senam and comrade Victor in the Constituency! During the 2016 elections this duo worked deep in to the night and most often till day break all in a bid to clinch victory for our Party. I know this for a fact because we were always working together, travelling to every nook and cranny to persuade people to vote for the NDC. The argument that because Senam couldn't speak Kasem or Nankani he shouldn't have been on the campaign team is flimsy, immature and smack of ethnocentrism . The NDC is a broad mass base party that accepts anybody anywhere regardless of tribe, social standing and region.

If the purpose of this grand orchestration of a writeup is to impugn the impeccable reputation of Hon. Woyongo and to dim his overarching influence in the Constituency and to upset his longstanding chummy friendship with Mahama , then it has fallen flat on its ugly face !

Finally, it is my well considered conviction that it is high time this Constituency elected a young, tolerant and impartial person who has what it takes to unify the Party to win election 2020 resoundingly!

12 organised crime suspects busted for carjacking, robbery a...
45 minutes ago