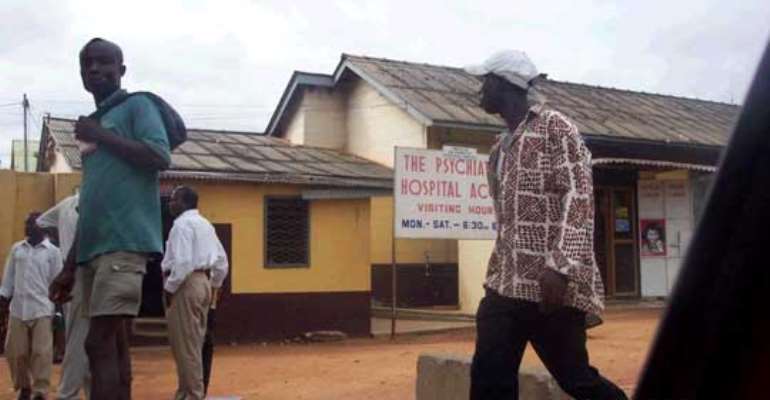 Speaking in Accra on Tuesday at a two-day forum on the theme: "Towards Saving the Collapsing Mental Health Service", Dr Osei noted that psychiatric hospitals did not have their own Electroencephalograph (EEG) machines for tests on the brain and the electro-convulsive therapy machines for treating cases like severe depression were either inadequate, old or did not exist at all.

"Currently in the whole country, there is no device that can stimulate the nerves of patients when they go out of function, and in the event of a case like stroke or paralysis, the person may have to be flown abroad or be left to the mercy of nature and yet there is nothing too complicated about such neuro-rehabilitation devices. "If we fly one or two patients out, the cost would be able to set up such a centre here."

He said the Accra Psychiatric Hospital had 1,200 patients on admission but had 400 beds only. The rest sleep on the floor. He pointed out that they would have problems during the harmattan season. "Accra Psychiatric will be 100 years next year, Ankaful, 40 years and Pantang will also be 30 years next year but our hospitals have not received any major renovations and they look more like prisons."

Dr Osei said psychiatry was not attractive because of the stigmatisation and discrimination against patients, which had been extended to health personnel. He said the field was also losing many of the staff to the developed countries due to the fact that the profession was not attractive.

"They do not see much in those already in the discipline to be envious about. It is not financially attractive, there are no incentives, it is full of risks, it is very stressful and there seems to be no prospect of progression."

He expressed concerns about the hazards mental health personnel were going through from injuries and assaults by patients. He suggested the need to introduce incentive packages like risk allowance, subsidized accommodation to motivate staff to stay in the country and the need to train more psychiatric social workers and to introduce occupational therapists for the patients, who had recovered to have some skills that would keep them busy and earn them some income. "Ankaful Nursing Training College should be reserved for training mental health students and not as Ministry of Health and GHS in-service training unit. (We) should pursue the establishment of psychiatric wings in all regional and districts hospitals and promote rapid passage of the Mental Health Law".

Dr Joseph B. Asare, former Chief Psychiatrist, suggested that the community mental health concept should be embraced to allow patients to be treated at polyclinics and other health centres. This, he said, would ease the pressure and congestion at the tertiary hospitals. He said the psychiatric hospitals should only be used for admitting severe cases, research and training of middle level personnel.

Dr Asare also noted that it was very important that the psychiatric hospitals were designated as teaching hospitals and the staff should work for a common goal of offering services and training of personnel. He suggested that the country be divided into three supervisory zones to reduce the inflow of patients from the regions to Accra.

"Psychiatric consultants from both private and formal sectors should be contracted and motivated to supervise these regions to ensure standardized treatment schedules and provide out-patients support". 22 Nov. 05