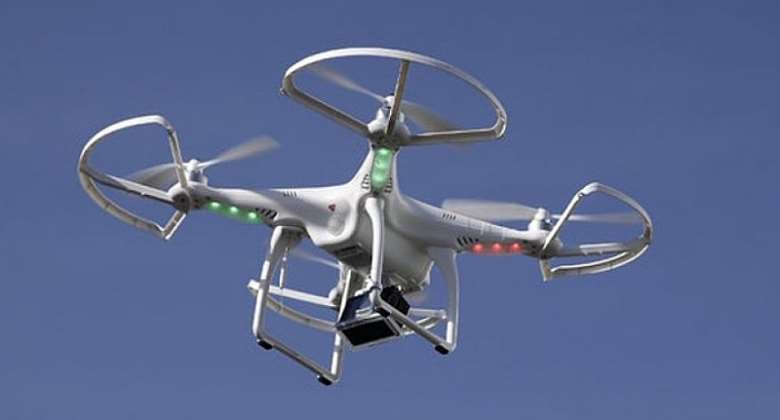 Since the government assumed office, they have been working hard at reforming the Ghanaian socio economic landscape by introducing technology and innovation to achieve varied outcomes. We have seen the paperless system introduced at the harbor, the ongoing National Identification programme amongst other policies all geared towards improving the system.

We have been learning from the success story of Rwanda in the area of the usage of Medical Drones to deliver emergency health service needs like blood and other emergency kits to their people in an emergency situation in the remote parts of the their country.

In the event of flood disaster and other accident and health cases, the drones’ service will come in handy in our part of the world. Our Honourable Vice President Dr. Alhaji Mamudu Bawumiah, I understand, waded into the debate about the use of drones and further said that when his father was in a critical condition and emergency services were not readily available he passed. There are countless of such critical health situations in our remote and urban areas today leading to deaths. So I support entirely the medical Drone system.

However, I see a clear challenge in the whole process leading up to the parliamentary vote on it and that is the non existence of stakeholder engagement and management.

Until recently when they saw the need, the Project Management Professional (PMP) body did not have “Stakeholder Management” incorporated in the course program knowledge areas. Fact is, stakeholder identification and engagement is key to any project success and buy-in and the Ghana Medical Drone system is no exception.

The opposition National Democratic Congress (NDC) has strongly indicated their disapproval of the deal and went ahead to vote against in parliament – threatening to “review” it should they win the 2020 elections because of some issues about cost and other concerns.

Civil society organization Groups led by Imani Ghana have also raised some issues. One other important stakeholder, perhaps the key stakeholder in the process who has come out, as well, strongly through a press statement calling for the suspension is the Ghana Medical Association (GMA).

I shudder to think that such a laudable programme to fix a need in our health delivery system did not identify stakeholders for broader engagement and consultations? I also read that the whole system is not going to be piloted or tested to identify lapses for effective implementation.

The parliament of Ghana in their characteristic partisan nature did not fail to disappoint! I look forward to seeing a Ghana that, matters of national interest, such as this are objectively analyzed the for national interest.

We have seen one too many policy failures in the past, and still, because of the myopic partisan lenses other than seeking the overall national interest. When we hit a snag, parliament would rush to do fire fighting. At that time, maybe a judgment debt scenario would have been lurking and same poor ordinary Ghanaian has to account for that!

What is in the rush? I join the other bodies who have made their point clear on it, this time as an ordinary Ghanaian, who believe in the president and his mantra that we should be Citizens and not spectator and call for a suspension of the Medical Drone system for a broader stakeholder engagement and consultation.