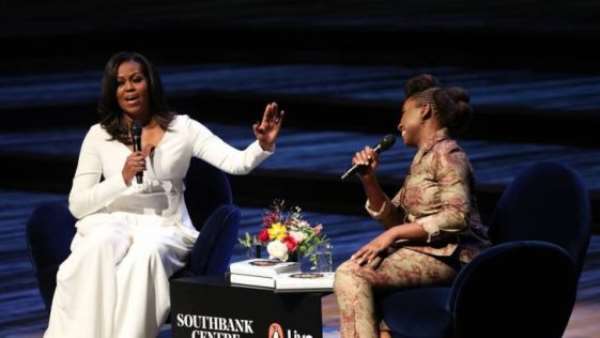 Former First Lady of the United State Of America, Michelle Obama in London where she delivered an “inspirational” speech to a sold-out Royal Festival Hall on London’s Southbank as part of her tour for her best-selling memoir “Becoming.”

The former First Lady was described as having “taken London by storm” by news anchor Jon Snow as she responded to questions in a Q&A session with author Chimamanda Ngozi Adichie, Standard UK reports.

She tackled topics ranging from her parents to her rise to becoming arguably the most powerful woman in the world.

Speaking to the crowd of thousands at London’s Southbank Centre, Mrs Obama told how her mother “encouraged us to let our voices be heard” saying:

“one of the things my parents believed was that my voice was relevant and my opinions were meaningful and my anger and frustration was real.

“My parents saw this flame in me. Instead of doing what we often do to girls who are feisty which is try to put that flame out to douse it because we are worried about them not being lady-like or being bossy? They found a way to keep that flame lit.

“To have that flame lit in a girl you need to let that flame speak accordingly and learn how to use it.”

She said her family lived in a house where “we didn’t have much by way of resources” and added:

“My father was a working class, blue collar guy. They had to work, but that doesn’t mean they weren’t highly intelligent.

“We were expected to be excellent, it wasn’t just from my mother and father.”

Ahead of her arrival on stage the 2,700-strong crowd watched a short film chronicling Mrs Obama’s life from growing up on South Side of Chicago through to university, meeting Barack, having her two daughters. The film also tackled some of the racism she faced on the presidential campaign trail.

Her mother, brother, two daughters and husband all featured in the video which had a soundtrack including hits from the Jackson Five, Chaka Khan, Whitney Houston, Lionel Richie and TLC.

Opening with her love of peanut butter she went on to talk about her working class upbringing, the difficulties of marriage and even how at times she wanted to “push Barack out a window”.

“My father had Multiple Sclerosis and it is a devastating and debilitating disease that slowly takes away the person’s ability to walk. It just gets worse and worse.

“I remember watching my father decline. I’m sure there is something in my personality…what happens to a kid when their parent is in a weakened state.

“How does that affect you even when your father is strong and loving and capable as a provider and goes to work every day? There’s a caution that comes in and I talk about how my brother and I we were really paranoid about fires because it really wasn’t clear if a fire broke out in our apartment how we would get out.

“So at a very young age we were thinking about getting my father out. My brother would have these fire drills where he would drag my father across the floor and he would allow it because he knew – it was funny – he would say ‘pull faster, hurry up’.

“My mother would say ‘be careful’. But that’s how we were always thinking that you have to have a plan. I’m still that person to this day and I think it’s because of my father’s disability.

“I say all that to say all that while his death was sudden it was always looming for us because he was also the kind of man who wouldn’t get help. He was proud and didn’t believe in doctors. I had to watch him get increasingly worse.”

She said her father’s death left her with an “emptiness” that she still cannot get rid of.

The exclusive London event, in front of a crowd of around 2,700 people, is Ms Obama’s only stop outside her 13-day US roadshow.

She cancelled her visits to Paris and Berlin so she can attend the funeral of President George HW Bush who died on Friday aged 94.