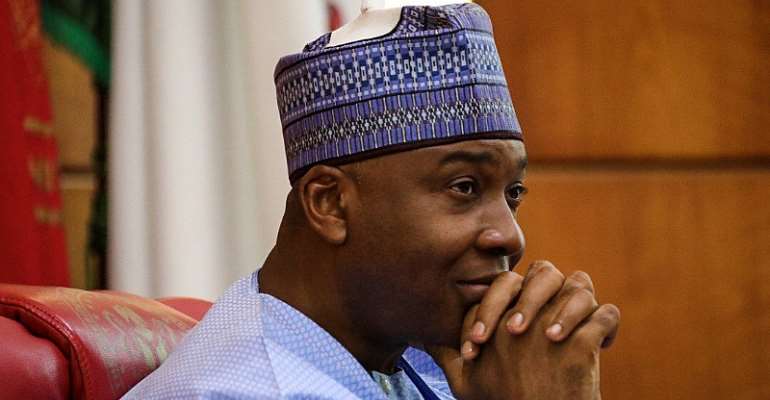 The Senate President Bukola Saraki has been “vindicated” by Supreme Court, the highest court in the land. It is not the first time. James Ibori also fought all the way to Supreme Court before he was also “vindicated”. People celebrated and danced. Even when Ibori was finally convicted in England, he was welcomed back to Nigeria with special prayers in the Church and traditional chiefs welcomed him. Saraki may get the same reception.

We still remember how Justice Ayo Salami, the former President of the Court of Appeal rejected inducement to be promoted to the Supreme Court by the former Chief Justice of Nigeria, Aloysiuos Iyorgher Katsina_Alu; as “Greek Gift” to throw a case before him.

It is even worse now that judges keep a pile of foreign currencies at home and solicit lawyers for presents to fulfill wedding ceremonies of their children like Justice Ademola!

When you read this statement from a member of the gang of the most corrupt leaders in Nigeria as innocent citizens are languishing in our jails because they have no money to bail themselves out, pay police or judges; we must wonder which country this Saraki rouge is referring to. Is it not sickening when due process, rule of law and democracy are used as excuse?

“I have always believed in the infallibility of our Judiciary, secure in the knowledge that our courts – the last refuge of the oppressed - would never condemn the innocent. This outcome is also a vindication of my belief in the rule of law”

Corruption is winning everyday in Nigeria and people are celebrating against Nigeria.. If there is a place corruption fights back with the cooperation of the masses dancing and celebrating, you can count on Nigeria. The Judiciary is so corrupt, you would think most of them were train or from Chicago before the clean up as some of their governors end up in jail. But the case of Nigeria harboring the poorest people on earth is so sad, there is no poverty comparison with Illinois, United States.

Other Nigerians watched, dismay that if someone as crooked and barefaced as Saraki could get away with impunity, there was no reason to jail poor people stealing in the market or beat them unconscious. Even armed robbers and kidnappers are wondering why they did not go into politics because their own acts involved greater risk of being jailed or lynched by the mob. These are the same people celebrating corrupt politicians.

Bukola Saraki is a qualified medical doctor but the job is too tedious for him and prefer the comfort of banking and politics. The family including the father left many Nigerians hanging dry after Societe Generale Bank liquidated all their savings. The father and the son became the Governor of Kwara only to steal the State blind. He was involved in so many schemes, even the Chief of Police could not move him an inch on bank fraud.

Recently another Chief of Police queried the same Saraki when it was established that he is the godfather of Armed Robbers gang at Offa where so many people were killed as if their godfather is bigger that the God of common people. These type of nefarious activities can never be connected to God fearing people. But when you sponsor thugs, they know that if they get caught, their godfather is waiting to bail them out!

These were the qualifications he presented when he wrestled the position of Senate President against his Party. But then, there were precedents since Tambuwal did the same to become the President of the Senate with the cooperation of Tinubu’s (Yekini Amoda Ogunlere) Party then, ACN. Tinubu got paid back with his coin when Saraki used his chicanery to sidestep him in APC and became the Senate President.

Tinubu and Saraki have more in common than political magomago. Yet, some youths are celebrating one against the other in the wake of Saraki “victory” at the Supreme Court. They are both crooks and vultures that have looted their states blind as governors and continue to enjoy the dividends of corruption. This is the Augean stable swamping the country with the highest number of poor people suffocate daily.

The poverty mentality has overtaken any form of decency in the polity and children born into it have no sense of normalcy without corruption from the lowest level of the society to the highest level of government. As much as a few people that could work against corruption tried, they were overtaken by the wave of corruption swamp. As some move a few steps forward, many more move the goalpost backwards in multiple steps.

One needs to visit Nigeria and see how poor people work from dawn to dusk. Even children struggle on the streets to supplement the income of their parents. The more they work, the less the money they earn could make a difference. Those that are totally exhausted and worn out live under the bridge, pick anything they can eat or sell dangerous elements from environmental dumps in one city or another.

These poor people watch as conspicuous spenders like Saraki that make their money from corruption display what they buy with it. They have fleet of luxury cars that only the rich and the famous can buy in rich countries. Homologous houses are built in capital cities, bought in world most famous cities and designer materials in clothes and shoes ostentatiously displayed to spite the poor and those celebrating them.

Saraki is a “devoted” Muslim. Churches and Mosques used to depend on them for tithes but now realize pastors and imams can become rich too by predicting calamities and performing fake miracles in order to entice the gullible; looking for salvation, riches and miracles. Jujumen have also joined the pastors and imams promising heaven and earth by rituals if they sleep with mad people, their mothers, bring the heads of their relatives.

Saraki and other politicians in his gang have sucked money out of development. This is how the society has gone down from bad to worse, as we say. The respect for hard work, humility and perseverance have gone out the window. Families have broken down and everyone is for himself. Schools have become money making ventures where the rich politicians, churches and foreign duplicated names are now the norm while government schools and colleges suffer without books, desk and chairs. Saraki and Co., trained abroad also train their children abroad. They don’t care. The poor worship them.

The youths can only emulate these “successful” enterprises of corruption they are born into. They wonder when God is going to pick their calls so that they can make money like Saraki and other politicians from every nook and corner of the country. Many of the youths have never seen hardworking people from their towns and villages that made it from grass to grace. They are surrounded by corrupt people that are either in politics or servicing politicians.

Youths neither have clean role models nor agree on one; except the one that can grab the biggest loot or rob by 419 (Yahoo Yahoo boys). How then can we blame the youths for being lazy when their mentors looted local, state and the federal treasury dry?