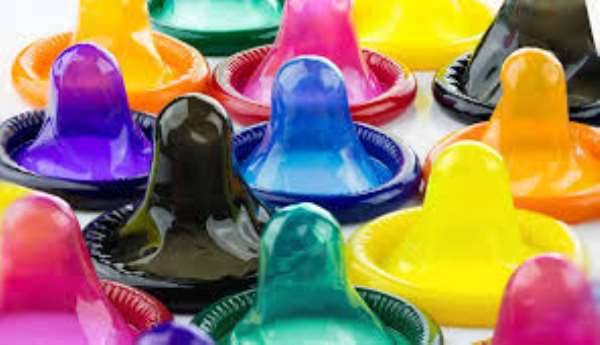 AIDS Commission is fighting the possibility of some Ghanaians contracting HIV\AIDS virus during and after NPP Annual Delegate Conference held in Koforidua Technical University(KTU).

The Commission is distributing contraceptives, specifical condoms at the premises of the election to the NPP supporters, Journalists and other observers trooping in and out of Koforidua Technical University(KTU).

Before one is given the contraceptive,HIV test is conducted to ascertain whether or not the one being tested is HIV positive or negative.

Explaining the rationale behind the free distribution of the contraceptive to Mynewsghana.com content editor, Odiasempa Kofi Boadi, Ms Golda Asante, Eastern Regional Technical Coordinator of the Technical Support Unit of Ghana AIDS Commission said Ghana is targeted to eliminate HIV\AIDS by 2030 and the Commission has a responsibility to play.

In order to achieve the target by 20230, Ms Golda revealed that the Commission has outlined three strategies dubbed 90-90-90 which involved the distribution of Condom.

“So far 450 people have been tested. We talk to people about sex in an occasion like this and afterwards, we give them the condom. The commission has outline 3 strategies named 90,90,90, with the aim of achieving the 2030 target”, She told Mynewsghana.com content editor, Odiasempa Kofi Boadi.