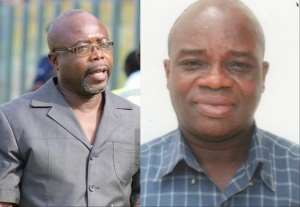 The potentially explosive documentary by investigative journalist Anas Aremeyaw Anas is alleged to have captured 77 Ghanaian referees and 14 Ghana Football Association (GFA) officials for engaging in acts of corruption.

However, as with most corruption documentaries by Anas, a few individuals are celebrated for their honesty as a result of rejecting bribes. They are Executive Committee Members of the GFA, Kweku Eyiah and John Frederick (JF) Mensah.

The two have been revealed as the two men who stood up against being bribed in the exposé titled - #Number 12 - which will be premiered in a few hours in Accra.

According to a report by the Daily Graphic, the two men resisted the attempts to be compromised during a sting operation by Anas and his Tiger Eye PI team to uncover corruption in Ghanaian football.

Ayiah, a lawyer is the Management Committee Chairman of the national U-17 team, the Black Starlets.

He led the team to the 2017 FIFA World Cup in India where they suffered a quarter-final heartbreak as they were beaten 2-1 by African champions Mali.

Popularly known as JF in football circles, he has served as Board Secretary for Cape Coast Mysterious Ebusua Dwarfs.

He has chalked a lot of successes as a management member of Dwarfs which saw the club participate in the CAF Cup Competitions on two occasions between the years 2000 and 2014. J.F also played a key role as a member of the Premier League Board (PLB) which adopted effective strategies and implemented new initiatives which saw a lot of transformations in the Board between the years 2006 and 2014.

As the Vice Chairman of the PLB Awards Committee, he played a key role which successfully organised the events from the 2010/2011 to the 2013/2014 football seasons.

Mr Mensah has also worked as the General Manager of the Ghana Tourist Development Company Limited in Accra.

#Number12 premiere
The eagerly anticipated documentary will show at the Accra International Conference Center on June 6-7, 2018. There will be four(4) screenings each day: 3pm, 5pm, 8pm & 10pm.

The video will also be shown at the new GCB Auditorium at the Kwame Nkrumah University of Science and Technology (KNUST) in Kumasi on June 9 and 10, 2018.

The people of Tamale will have their turn to watch the video at Radach Hotel on June 13, 2018, while those in Takoradi will have the opportunity at Akroma Plaza on June 16, 2018.