Ghana Roads And Streets Construction: Thinking Outside The Box 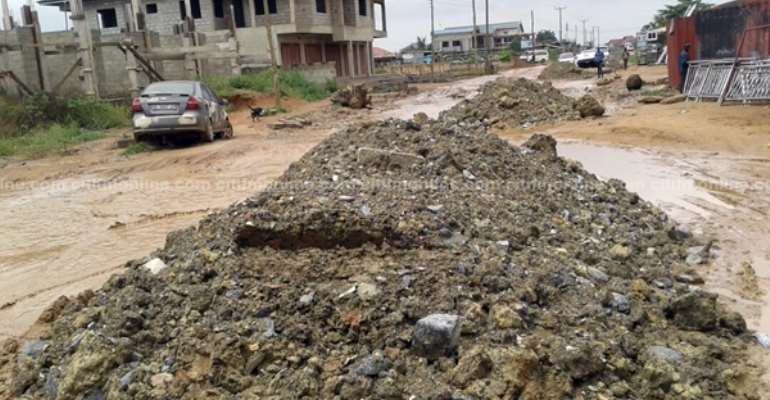 Sometimes people ask me why owners of plush mansions or building in the suburbs of our cities won’t help to rebuild or tar the bumpy and dusty roads and streets that lead to their properties. A good question is my constant reply But who bears the legal responsibly for the up keep of our public roads and streets if the government refuses or is reluctant to pave and improve those roads.

The constitution mandates the government to provide the necessary infrastructure for the movement of people, goods and services due to public convenience and necessity This has been the question that has been lingering on since our cities have been experiencing the growth of new private buildings all over the municipalities of Ghana.

Which institution is responsible forbuilding public roads and streets? The national government or the districtauthority are legally mandated for construction and maintenance of the country’s road and streets. But if you visit the cities in our municipality the deficit of roads construction and improvements on the existing ones and the proposed ones is so overwhelming that it will take decades backed by adequate funds and the political will for the defect to be eradicated and catch up.

Reasons may be due to funding and the politicization of road construction; a case in point a mere 150 miles of the distance between Accra Kumasi has been under construction for over the past ten years.

Dubbed by the previous NDC government as “Ashanti project” the construction was completely ignored or niggardly attended to resulting in untold road accidents, mayhem and loss of lives on the most important and strategic and viable economic road in the country.

My objective here is not to dwell on whys and wherefore these toads are not builtor properly maintained but try to encourage citizens to help to develop their roads and streets in their communities andneighborhoods due to failure of the government to pave and maintain our roads and streets.

When Istarted working asanattorneyfor theState of Kentucky, I was posted as a district attorney for TransportationCabinet in charge of ten county wide areas, in Southeastern Kentucky. My primary responsibilitywas to assisttheDepartment of Highways to acquire property through EminentDomain so as build roads in the remotest parts of state.

South Eastern Kentuckyis enveloped by the Appachian mountains thereby rendering most parts and in accessible and, therefore, under developed for many years. But later on the state government realized that to speed up economic development in the less developed part of the state ,the state legislatureappropriated massive funds for infrastructural development throughout the state.

The mantra at that time was “ build the roads and business will follow” After years of negotiations with the land owners as well as the owners of private toll roads which have for years provided accesses to the remote parts of the state the lands were finally acquired after a fair andreasonable compensationhad been paid to the owners.

Now most of the mountainous part of Southern Kentucky are linked by highways and other infrastructure in consequence of which many businesses from Louisville, LexingtonNorthernKentucky have relocated branches thereby providing jobs and minimizing huge un employment whichhave created social backwardness in these areas

Hitherto most of the roads in that parts of Kentucky were owned by privatecompanies or individuals whocollected tolls from motorists and other road users which hauled coal from the neighboring coal fields and residents. Toll collection from privately constructed goes back to the common law ruleera whereby private owners of roads had proprietary interests and therefore were allowed to levy taxes for the use of their property by road users..

Therefore in an answer to the previous question as to why home owners would not repair or improve the roads that lead to their homes could be explained by the fact that that the government either national or local won’t allow such construction since thiswould undermine their sovereign authority to levy or collect taxes for the building of public roads and high ways.

Few years ago the University of Ghana put up a toll both on some roads it has constructed near the campus to ease traffic congestion in the area only to be pulled down by some agents of BNI. Typically no one questioned or challenged the arbitrarily and capricious action in courtor asked any questions. It was a subject for a headline news and radio discussion for three days

To remedy this calls for new thinking or thinking outside the box where Parliament can pass legislation under appropriate zoning laws authorizing citizens and home owners to pave and improve the streets or frontage of their homes to the next adjoining property without encroaching on the rights of government ownership of the land.

A massive educational campaign by the governmentto land owners developthe streets in front of their homes to say 50 yards or to the adjacent property in the spirit of public interest and cooperation would certainly generatesupport. In US by law,home owners are responsible forpaving and maintaining theirside walks;theycannotobstruct free access of the public in using the pavements.

A good pr job by the national government and the local authorizers can stimulate home owners interests and support to improve and other wise build roads intheirneighborhoods which now only home owners whodrive 4 by 4 and V8s vehicles can easily navigate the grave yard like pot holes.

Those who use taxi cabs have to suffer broken chassis and broken shock absorbers most of the time when they drove by those so called roads.After all the public policy of the state mandate citizens to contribute to the over all development of their communities; so fixing roads are a shared responsibility with the government. No doubt citizens participation in developing and improving streets in their neighborhood would ease the burden of government

Meanwhile every one is expecting the government to provide amenities or “wait for a piece of the national cake” Let’s us not also forget that we also as citizenshave the corresponding responsibilities to pay our taxes and support our communities and provide services for our common good. Let’s go beyond the conventional wisdom of the roads are “abandea” mentality (roads belong to the government) andthinkoutside the box for our ownroad safety.

The resources ofgovernment are not un limited against a backdrop of the systemic corruption now draining a fraction of the state treasury into selfish pocket of afew. Sometimesthe political will doesn’t support what the people want as demonstrated by previous government.!

Hopefully the current NPP administration shall stop the corruption leakages and put into place the political will to develop the much needed infrastructure. This efforts should not precludethe home owners andthe private sector to develop the streets and land adjacent to their properties.After all, roads are built for public convenience and necessity.