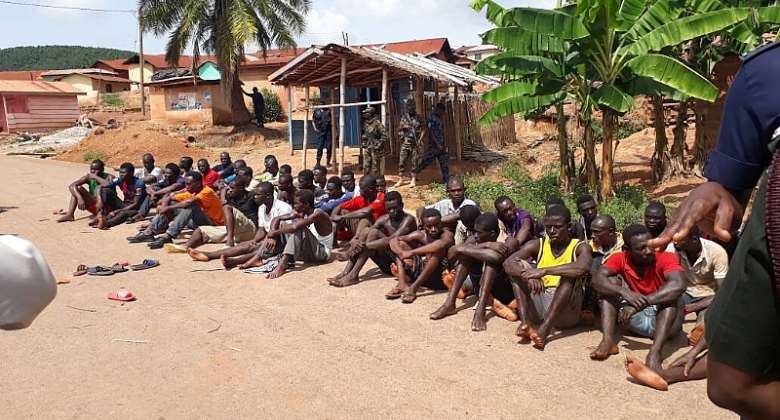 The high incidence of violence exhibited by some Ghanaians has for some time now perplexed the minds of the general public. Every blessed day, writers of various dispositions are found expressing their views on this disturbing act of violence that most Ghanaian youth have resorted to.

These acts of violence are made manifest through the actions and deeds of the Delta Force. We cannot overlook the mass destruction by some concerned indigenes of Somanya who were not happy of the light bill issued by VRA. Much has been done to curb this anti-social act but it is still on the increase.

The most recent and horrifying act that has agitated the minds of many Ghanaians is the gruesome murder of Captain Mahama Maxwell who was mistakenly considered as an armed robber. This act has really inflicted deep wounds in the Ghanaian society. Just like any other Ghanaian, I believe without any regrets that this act of violence is uncouth, barbaric, and unheard-of and a travesty of justice. Even convicted thieves and murderers are taken to prisons and not being brutally stoned to death.

The horrendous effects and implications of these acts of mob action are quite obvious. We do not need a seer to soothsay that Ghana as a nation is heading towards doom if nothing is done about this act of lawlessness. Many a people, out of shock, are pushed to ask the hard questions like “were there no police stations around?” was there no single soul who had pity for the man who was lynched to death? Pathetic, in our permissive society is the rate at which people engage in such gory and brutal acts. Mounting violence will doom our country to a collapse.

No one cause stands alone to account for the various acts of violence and seeming atmosphere of turbulence in our dear nation. Rather, several factors have combined to create this mess.

Several factors combine to create a fertile ground for this unwholesome situation. Hardened criminals who are supposed to be languishing in the corridors of prison are gleefully seen walking on the streets. This act, to a large extent, has infuriated many a citizen making them to think that the police station won’t be able to amicably solve their problem.

This act depicts that our social fabric as a nation is broken. The very things that bind us and identify us as Ghanaians are gradually fading away. The people who are noted for compassion and love are gradually turning into people who have no mercy for their fellow humans. All hell has broken loose on earth because the trust the masses reposed in the leaders and the law enforcing agencies is long gone. To the average Ghanaian, the security agencies are inept and corrupt.

This is nothing good to write home about because our dear nation is gradually being ripped off of its collective conscience and morality.

Over the years, many Ghanaians have grown bitter and sour to the extent that we are gradually metamorphosing into some sort of people. With cannibalistic instincts of a lion and the destructive strength of an elephant, we devour our fellow human beings without any mercy or regrets. If a human being can be lynched to death, It is therefore imperative for one to posit that Ghana is not immune to the acts of war as seen in other countries like Sierra Leone, Liberia and Ivory Coast. We are not at peace. These anti-social acts, if not curtailed, have ample power to cripple the hard-won reputation of our dear nation and even render Ghana as a ghost nation.

THE WAY FORWARD
All hands should be on deck in the crusade to wage a successful war against these acts of violence. Measures should be adopted to restore the lost trust in our law enforcing agencies. The citizens should be able to take suspected thieves to the police stations being rest assured that the law will take its due cause.

For this to see the light of the day, the law enforcing agencies would have to be alive to their responsibilities as the torch bearers of the nation. Apart from effectively enforcing the law, they should live lives worthy of emulation. They should lead lives beyond reproach and show themselves to society as good role models who are not above the law. The old Ghanaian fabricated adage which says “a police man does not arrest himself” should be eschewed.

Without any shilly shallying, the law enforcing Agencies should come out with stringent measures against people who involve in the act of mob action. The perpetrators of such heinous crime should not be allowed to go scot free. They should be made to dance to the rhythm of their own tune.

Also, every effort should be made by the government, non-governmental organizations and religious institutions to embark on a moral revolution of the citizens of our country through effective and powerful education campaigns aimed at exposing the citizens to the dangers of mob action.

A challenge and a clarion call is therefore issued to the religious institutions to redouble their efforts in their bid to help the nation have morally upright individuals whose sole aim is ensuring peace and tranquillity on earth .

With these measures being implemented, acts of violence, if not completely eradicated, would be reduced to the barest minimum. Until then, we as Ghanaians will continue to canonize our demons and vilify our saints and heroes.

I rest my case.
My condolences to the family of the late Captain. Ghana loves you to a fault.

THE WRITER, ELVIS EFFAH IS A STUDENT OF THE UNIVERSITY OF CAPE COAST.