Unruly Vigilantism By Some NPP Followers Must Stop! 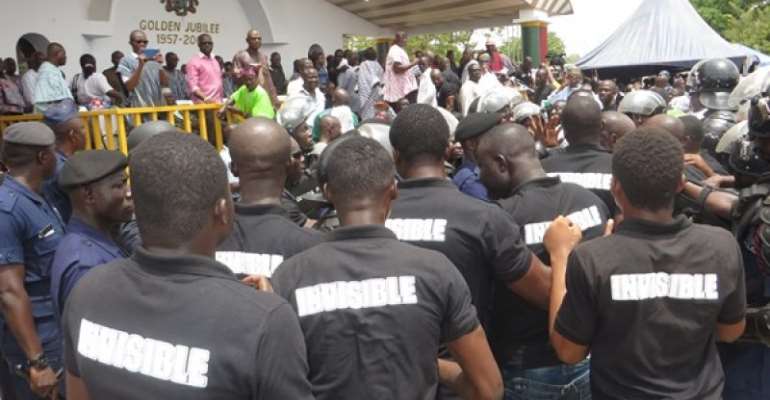 It has almost become general truth that strategizing or devising effective means to seeking and acquiring power is relatively easy compared to what to do with it or how to use the acquired power for the benefit of humanity. Put differently, the process of seeking power per se is poles apart of having the power and using it humanely. Power asserts itself through multiple trajectories. But, here we are talking about seeking, acquiring, and using political power sensibly.

Since acquiring political power on December 7, 2016 through resounding electoral victory, the triumphant NPP’s top leader, President Akuffo Addo, has made it crystal clear to all Ghanaians, including his own party followers that he is going to be humble with power. In addition, Nana Akuffo Addo has stated on numerous occasions after becoming the president of Ghana that he will not let political power he has acquired corrupts him and his administration. Almost everyone in Ghana, many of us living abroad not excluded, has heard President Akuffo Addo reiterating the fact that he is not interested in abusing the political power Ghanaians have entrusted in him.

In view of these humble assurances from the current leader of the ruling NPP government, it is unsettling to see some groups of disgruntled followers of NPP, going by the names such as “Delta Forces, Invincible Forces” and whatever, appear to tarnishing the image of the party via their blatant misuse of power. What is nauseating about this power abuse and unruly vigilantism is the groups’ passionate but false claims that without them the NPP, and by implication, Nana Akuffo Addo couldn’t have been elected president. Not only are these self-acclaimed NPP vigilantes’ assertions factually untrue, but more importantly, by their disorderly behaviors, the groups would end up turning off many non-committing Ghanaian electorates who may consider voting for NPP in any future election.

Surely, waging any effectively winsome political party campaign involves sustained grassroots mobilization and organization. To that end, if the so-called “Delta-Invincible Forces” are really grassroots enclaves within the NPP, then their efforts played pivotal role in contributing to the party’s wrestling of power from the NDC and as such leading to the election of Nana Addo as president in 2016.

However, one most significant fact the party’s fearsome vigilantes selfishly ignore is that their contributions alone couldn’t have gained the NPP and its presidential candidate political mandate. It took other equally committed members of the NPP who did not belong to the “Invincible” or “Delta Forces,” and the majority of Ghanaians tired of the Mahama-led administration to ensure that the NPP became the ruling party. Those are the facts; therefore, it’s an unfortunate manipulation of events for some groups of people to parade around the country as the only true foot-soldiers of the ruling NPP seizing or taking over public properties because they see their party in power.

The NPP many of us knew and helped to bring into existence through grassroots activism in the late 1980s or early 1990s is never about violence regardless of what a bunch of people outside the party have been trying to paint it in that direction. Arguably, of all the political parties in Ghana, the NPP is the leading advocate of genuine democratic peace and ideals. This is why it’s so mind-boggling and shameful spectacle to see some attention-seeking individuals violently trying to hijack NPP and thus twist the arms of President Akuffo Addo so as to have their way. The unruly conduct of some of the vigilantes is gradually portraying NPP as a political organization that has acquired power but woefully struggling to manage it judiciously.

At any rate, it is dubious to shift all the blame on President Akuffo Addo for not singlehandedly stopping the unruly actions of the “Delta Forces” and other undisciplined “groups” within the NPP. It will take the combined effort and willingness among the MPs and all the nationwide constituency chairs and their executives to help curb the violent misbehaviors of the vigilantes. In fact, reading between the lines, it seems like those rowdy vigilantes have some supports from some well-positioned members of the NPP at the various constituency levels. These influential leaders indirectly are using the “macho vigilantes” as their bargaining chips to also get the attention from the top echelons of the NPP leaders in the Jubilee House. You can call this scenario intra-party power struggle and you may not go wrong.

As a former foot-soldier of the NPP in Kumasi in the early 1990s, some of us may have some sympathies for the party’s grassroots organizers, especially, if whatever grievances they have are reasonably channeled through proper and peaceful avenues. But the use of violence and aggressive tactics as a means to an end are self-destructive and a recipe for failure of the NPP, including Nana Akuffo Addo’s presidency, too. Is that what the “Delta” and “Invincible forces” want happened to the party they say they helped bring to power? These over aggressive and unruly vigilante activism within NPP must stop because they are bad omen for the party’s future prospects. “Power” indeed “corrupts.”

The writer is based in the United States and can be reached at: [email protected]

The author has 196 publications published on Modern Ghana.