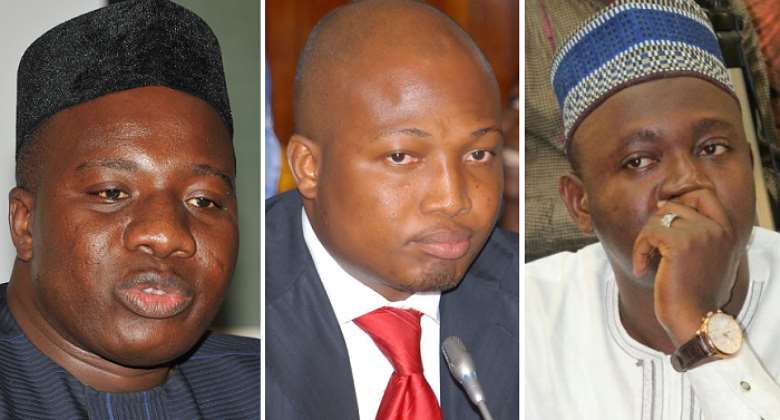 The louts on the minority NDC side of parliament, Mahama Ayariga, Suhyini, and okudzeto Ablakwa must be, immediately, referred to the disciplinary committee of the August house for suspension. In fact, they must be arrested for treason for plotting to mar the credentials that the nation, as a whole, has chocked in our democratic dispensation, an enviable milestone thus far appreciated by the whole world.

When drunkards and political miscreants plan evil in a show of narcissism, the nation must apply the brakes and drop the charlatans off board. It is unimaginable that the trio would want to stall the peace of our country by smearing the honourable ministers with untoward accusations and behavior more reminiscent of gutter spirogyra, single-celled, slimy, and spineless. I had, already, made mention that the bribery brouhaha that Ayariga et al started was cooked up. In fact, from NDC inside sources, I am reliably informed that Haruna Idrisu is leading this attack backstage, pulling the strings for his parliamentary “koliko” colleagues to dance to the discordant tunes that they are so used to singing.

I will not be surprised if the corrupt former President John Dramani Mahama was behind this saga, and that of Honourable Otiko Afisa Djaba’s. For one thing, John Mahama and his NDC surrogates have a penchant for killing an ant with a bulldozer. That was a confession made in a public forum by the former President. This negative reputation of vindictiveness is a dent of shame on the reputation of our body politics in this country. How can babies with sharp teeth continue to bite the nation with such scorn and impunity? The nation definitely needs treatment against rabies that we have been so infected with by these loquacious biters. Someone once told a biter, “I wouldn't soil my knuckles on your ugly face; but if I had my thick boots on I'd dance the soul out of your carcass for two cents!” How apt!

If these gangster parliamentarians were in another country in Africa, they would have been lynched by good people intolerant of nation wreckers. And that is what Mahama Ayariga, Suhyini, Okudzeto Ablakwa, and others in the NDC caucus of parliament are – sheer nation wreckers, plunderers, and absolute schmucks! Let me state that the Honourable Boakye Agyarko is overly competent, and will never stoop that low to give money to undeserving scamps as the trio mentioned above. Besides, he is from the majority side in parliament that has absolute trust in him because same that was reposed in him by His Excellency The President, Nana Addo Dankwa Akufo-Addo, carries more weight than the collective honour of the NDC bigwigs put together; that is, of course, if they have any at all.

Besides, why would Honourable Boakye Agyarko bribe these cheap idiots? I read a comment on FaceBook some few days ago by a concerned patriot, who said, and I quote, “We have the numbers in parliament to make a blind man Minister of Education if we wanted!” How fantastically true. I leave you with a whatsapp screenshot of a chat between Ayariga and Suhyini. It is over to you folks, deduce your verdict!

Leave Boakye Agyarko alone. Running a country is serious business unlike the nonsense of the NDC baloney gigs!