Ghana Is In Trouble If Nana Akufo-Addo Fails 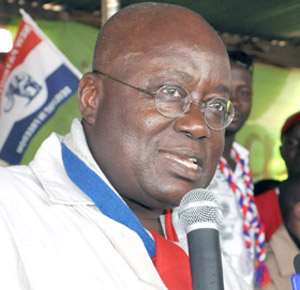 The reasons for the overthrow of Osagyefo Dr Kwame Nkrumah are multifarious. It ranges from the hated one party state dictatorship to almighty corruption. Kotoka and his lieutenants kicked him out as a result, and replaced him with General Ankrah. Hardly did we have time to breathe a sigh of relief when the ugly face of hypocrisy came sprawling – here I am.

General Ankrah, the hero on the Whitehorse, the redeemer who gave voice to the aims of NLC’s overthrow of Nkrumah, had to resign due to the Nzeribe case. Just over two years at the helm of affairs, Busia was shown the door by Acheampong. Among Kutu’s reasons for ousting Busia was corruption. He even baited him to come back from exile to answer charges of corruption. Acheampong, without a gun shot, was replaced in a palace coup by a member of his military junta, Akuffo, for economic sabotage. Yes, that is a very handsome way of expressing corruption.

When Rawlings shattered the tranquillity of the nation leading to the 1979 election, his alibi was that the Akuffo led military government was corrupt to the marrow. Of all the military take overs this was the bloodiest. Rawlings dulled the senses of Ghanaians when just after three and half months in office he handed over power to the democratically elected leader, President Hilla Limann.

The cockerel did not get to crow the third time when Rawlings came back playing the same old tired gramophone record. Well, that was the last of the military adventures in our history. However, Rawlings after nineteen years of whirlwind of brutality meant to whip Ghanaians in line and rid the land of corruption, I can bet my cedi that Rawlings in his private time is haunted by the spirit of, for example, Col. Felli.

The latter was shot at the Teshie Military Range for having just $300 in his foreign bank account. On the other hand, the joke about his own shock at the sight of one of his henchmen’s residence begs the question: was 1979 bloodshed worthwhile? Kufuor’s administration was not spared the tag of corruption, which mainly led to the defeat of Nana at his first attempt. By 2012, the spring flowers of corruption was blooming wild in the Ghanaian countryside.

The sight of it became so beautiful and attractive ministers began domesticating the flowers with thorns in their homes and offices. Into the middle of President Mahama’s term in office, it became so blatant that impunity and arrogance became bedfellows with corruption. This time, it was not the sound of bullets, like in 2000 and 2008, but the shuffling of papers in ballot boxes that overwhelmingly brought down a corrupt government.

The magnitude of the awe-inspiring cry for change registered by the voters in favour of the opposition party has never happened in our short political history. This is not a lonely voice crying out in the wilderness for change; it’s the voice of millions screaming their hearts out to our politicians for salvation. This is not just a cry of frustration to Nana Addo, but to all politicians, especially those who have got the power now.

I have lost track the number of times the incumbent government were labelled as corrupt by the winners. The sad reality is that this is the mantra we’ve been hearing for the past 50 years. So, in the midst of the unfettered euphoria we can still hear the soft and silent voices of concerned Ghanaians: is this also going to be the same old story when the time comes for stock taking?

My plea is very simple. Please, don’t be hypocrites; let us consign the word corruption and hypocrisy into the dustbin of Ghanaian political history. The power to make Ghana great is in your hands now. We have had so many alibis for far too long, and we are running out of time and excuses. Though I have my reservations, I am still confident that Nana will deliver Ghana from the shackles of misery since independence. Because we currently have the potential to grow the national economy by a minimum of 10% each year. The possibilities are within the range of 12 and 14 percent. To that effect, by the end of Nana’s eight years we can easily double the size of the economy. What I am writing is not just brewing out of my imaginations.

Energy seems to be our biggest problem. Fortunately, it appears the right keys have been plucked with the oncoming $7 billion ENI gas project. With a little bit of sound economic management, which the country was denied under the outgoing government, Ghana will be going places. As long as Dr Bawumiah is around I can keep my doubts in check, at least, when it comes to sound economic management. Nana Addo Dankwah Akufu-Addo and Dr Mahamudu Bawumia, please do me proud. Posterity will not forgive us if we waste this opportunity to revive the dream that was stolen at independence.