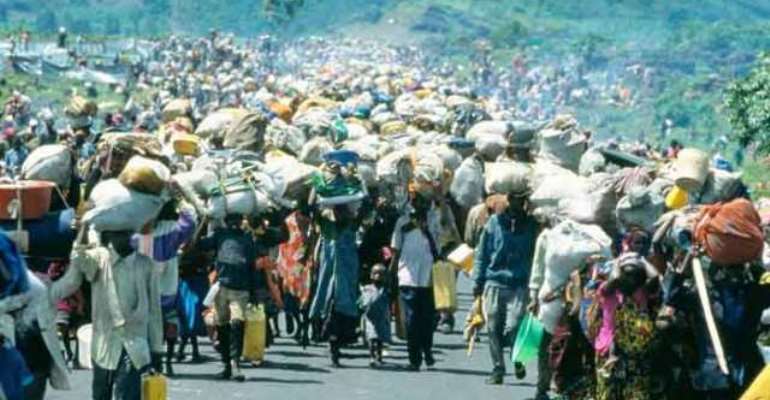 There are no people more disrespected, oppressed, alienated, despised and castigated than the refugees no matter where they are. What is surprising is the amount of money allocated to the welfare and management by most of the countries including some of those countries where they are despised. We are talking about billions of dollars that could start a new country. Even policing them for their own protection cost money. It was inspiring to see them at Rio Olympic.

Most refugees and migrants always start from afresh. Agriculture from scratch to the finished product must be foundation of United Countries of Refugees so that they could be sufficiently fed to the point where they could export their products. It does not make sense to create another basket case country looking for hand-out from the rest of the world. In other words, the world richest countries must not create another country just to feed their raw materials.

Some countries like Italy, Canada and even United States locate some of these refugees in areas where their population is dying. Indeed, most countries dare not expose to their citizens that immigrants are needed in view of their dwindling birth rate and lack of young ones to support their elderly population’s social security. The indignities meted out to refugees have been heightened by the disruption of African and Middle East countries by nation builders.

It is hard for most people to believe that South Africa handles one third or fourth of world’s refugees and migrants. It has resulted in xenophobia among neighbors and fellow Africans that used to get along especially during the era of Apartheid when Africans unite in the struggle for Independence and Freedom from oppressors. South Africans are disillusioned and also in need. Lebanon with a population of 4 million, harbors 1.5 million Syrian refugees.

Just as world powers have tried to shape individual countries according to their economic dreams as suppliers of raw materials that can be sold back to them as finished goods, African and some Asian countries have home grown dictators that have sent many of their talents out in the cold crossing seas and deserts looking for saviors among their colonial masters. By the time they find out that they can only become second-class citizens, they rationalize their plight.

United Country of Refugees should be totally different from safe-zones where people of war-torn countries could settle. It must also be different from Israel where existing people were forced to give up their land with the consequences of civil wars and strife. If anything, we have to learn from those two types of creation in forming United Country of Refugees. Others may argue that there is no more habitable land. There are, China created islands in the South sea!

This is why the rich and the powerful are searching the Universe for another planet where they can move to as they destroy the only planet we know: denying climate and global warning. In creating another country for refugees, we must re-define who qualifies and in what numbers. We know that once there are civil wars, helpless refugees are created. On top of that are economic refugees and conscientious migrants. Nobody thinks it was going to be easy to define.

What is clear is that we are dislocated around the world by terrorism that has lowered our tolerance for one another. It is political suicide to welcome them. Class, political and religious divide between people in the same country has fractured civilized living and created enmity across the bridges. In that case, a classless, nonpolitical and nonreligious community could be a starting point. In other words, could humans function without class, religion or political beliefs?

It has been postulated that Muslim refugees coming into Christian countries should leave their religion behind as essential qualification for acceptance. It becomes a question of which is more important to each refugee. Indeed, some refugees, running away from wars and economic ruins have opted to become Christians to enhance their acceptability into the new country. We also know that in Saudi Arabia, one of the conditions to work and stay temporarily is to abide by the Muslim (Sharia) laws. You cannot establish a Church or try to convert anyone in many of them.

Religion is very important to man and we have always created one to instill the fear of God. Even among those that do not believe in religion, most think about some superior being. When we are alone, weak and desperate most people look up to something. We can call it love, luck, charm or devil. We pray for something to lean on when in need. Since some people believe that God created man in his image, some of us look for someone to lean on.

Political belief is easier in these days of mix economy. The days of serfs and lords are gone but capitalism with a human face remains just as socialism with capitalist tendencies to create incentive to work hard and produce. But we have to be sincere; some people are followers while others are leaders. Even if each refugee is given a million dollars into their new country, by the end of a year or two, some will become penniless while others become billionaires.

Money creates class. Whether we like it or not, classes will emerge in the new United Country of Refugees! People send their money differently. While some spend frivolously, others are guided in their spending, saving more than they spend. Indeed, the poor are more generous to one another than the wealthy. The very rich do not start giving their money away, until they get old and cannot take it with them. Even then , it’s among insightful or broadminded. See G. Soro.

Waiting to solve or neutralize religious, political and economic interest is another form of procrastination. The united Countries of Refugees can be administered by the present United Nation taking representatives from the refugees and migrants until such a time when they can be granted Independence under laid down constitution that would minimize religious and ethnic differences. Most refugees and migrants always start from scratch in their new homes.

Therefore, looking for space of land to allocate the refugees is a task in itself. If United Nation actually finds a land for United Country of Refugees, it may actually encourage more refugees from regimes they do not like or they disagree with. What is clear is that man has the capacity to create a new country but may lack the ability to sustain it. Egyptian billionaire Naguib Sawiris offered to buy 1 of two privately owned Greek islands for Arab/African migrants and refugees.

Be strong — Isaac Adongo consoles Bawumia with a cow for mot...
43 minutes ago