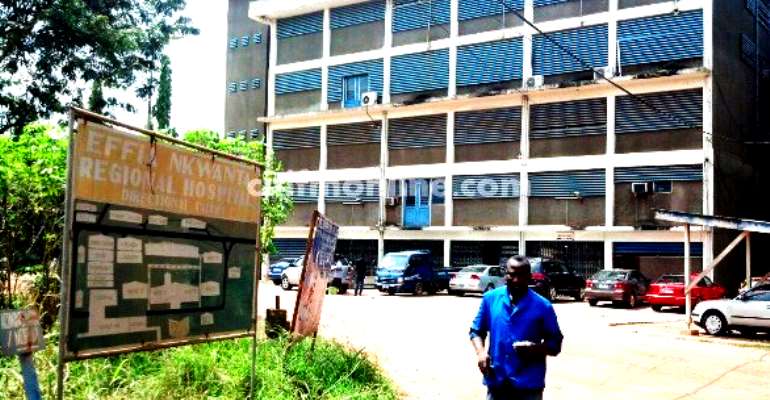 The authorities at the Effia Nkwanta Regional Hospital in the Western Region have appealed to the government to build a new regional hospital to ease the pressure on the current facility. “The  existing structure cannot accommodate the increasing number of patients who come from the Sekondi-Takoradi Metropolis and all the way from Ahanta West, Shama, Wassa East and parts of the Nzema East Districts,” they said.The Effia Nkwanta Regional Hospital was built in 1938 and served a fairly small population in the Sekondi –Takoradi area at the time. The facility is now serving more patients from other districts and even beyond the region.Following an appeal from the hospital, the Omanhene of the Lower Dixcove Traditional Area, Nana Kwesi Agyemang IX, who is also the Acting President of the Western Regional House of Chiefs, has given out a large tract of land for the purpose.

In an interview, Dr Emmanuel Tinkorang, the Western Regional Director of Health Services, said apart from the Western and Eastern regions, the other eight regions had benefited from hospital expansion projects and infrastructural development.

“The case for Effia Nkwanta is acute because the landscape makes it very difficult to undertake any expansion programme. In its present state, however, the hospital needs major renovation works to bring it up to standard and we believe that putting up a new hospital will be the right thing to do,” he said.

Dr Tinkorang said even though the government had done well in improving existing structures at the hospital, there was the need for new buildings.

He said the hospital was currently facing a number of challenges such as the absence of a Psychiatry Unit and other departments critical to ensuring overall good health.

He intimated also that because the hospital did not have the full complement of facilities, it sometimes referred cases to the Cape Coast Hospital.

According to Dr Tinkorang, between January and June this year, 15 maternal deaths were recorded at the hospital as a result of inadequate resources.

New hospital, a must
The Medical Director of the Effia Nkwanta Regional Hospital, Dr Paul Kwaw Ntodi, corroborated what Dr Tinkorang had said.

He emphasised that considering current challenges the hospital was faced with, there was the need for an entirely new hospital to either replace or support the existing one.