Black Women, Whoredom and the Harlot Generation in North America 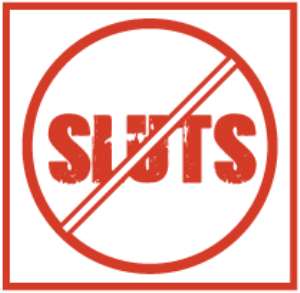 Perhaps more than in past times, a generation of feminism-charged, licentious, and whorish black women are making the black communities of North America look just plain bad and exceptionally dysfunctional. Despite this, some would have us believe that they are doing a great job of raising black children.

It is clear from the reality of modern day whoredom among the black race that black females—at least in North America where I live—have fast become an impediment to righteousness, as well as a serious liability to the entire black race. This commentary seeks to briefly explore recent events dealing with black males in the North American media, and will show that when it comes to black females of the licentious kind, black male lives largely DO NOT matter except for material gain and cheap publicity in the name of social activism.

Black Men and Black Females: The State of the Race according to the media

The statistics show that many black women are marching on to the call of Western-style higher education and the upwardly mobile fantasies associated with this form of education. But is all really well with black women in North America? Don’t think so. It is my belief that numerous black women have become blatant whores, agents of perversion and can be termed a liability to the black family and race. How else could the singlehood and divorce statistics associated with black women in North America have risen to be so high? For example, black women in America showed a rate of 70% single and 42% unmarried since about 2009. In past years before 2016, these stats were widely reported via ABC News, The Washington Post, CNN, and even on Oprah.

So what about black men? As usual, black men are in a state of being detested and persecuted in Western nations like the USA. According to my perception, Canada is no better and perhaps worse for the black male. Canada is a nation where institutional racism proves to be the bane of black males who despite moving in the direction of being highly employable through a reasonable education, still get trounced when it comes to job selections.

More recently among black males, police violence or heavy-handedness—take your pick of terms—has been spotlighted since cases involving Alton Sterling and Philando Castile became well known. Both of these African-American men were recently killed via gunshot during interactions with police officers in Baton Rouge, Louisiana and St. Paul, Minnesota respectively. Their stories reflect aspects of the systemic racism towards and seemingly powerless plight of the black male in a North American setting like the USA. In fact, these killings have provoked strong resentment among many African peoples against white people, their slave systems of the past, and their current heathen democratic order.

The shootings of Sterling and Castile have sparked an increased tone of the baritone kind among the black female founded movement called Black Lives Matter (BLM). BLM was originally the result of social media activism on the part of Alicia Garza, Patrisse Cullors and Opal Tometi, three African-American females. It is apparent that black women such as these, believe that it is their duty to “PROTECT” black men and boys from harm through activism???

I wonder how though, when so many black females are a disease in the black community due to blatant whoredom. Of course, I am not saying that any of the three instigators of the BLM movement necessarily fit this category. Nonetheless, it would seem that their obvious choice would be to help black mothers and women in general become chaste and productive instead of supposedly PROTECTING black males from harm. These women could also choose social causes that fight against the incompetent child-rearing tendencies of black women in general.

Instagram Angels or Whores: the Black Female and Social Media in North America

Whoever thought that a black woman would come online to sell her body and twerk in the name of freedom of expression? Many of these women are single mothers with very little reason to be doing what they do in public, considering that they have young children. I recently witnessed one of these whores scantily clad with her son holding her backside in Instagram. Clearly, the imagery of incest was intended. No pun on my part is intended here. It’s reality: black women in North America are fast losing their minds to whoredom and stupidity.

These black females on Instagram and other online outlets are the same women who we often hear of in North America, calling the police about black males in their communities whenever their hatred for men erupts. In other words, such women have become accustomed to letting the legal system permit them to behave not only as whores, but destructive baby mommas who definitely CANNOT raise children without compromised interests. Can these women raise children properly? I don’t think so.

Korryn Gaines: an epitome of the emotionally charged and loose black female of today

Another black person was stripped of her life via police involvement just the other day. However, in the case of 23-year-old Korryn Gaines and what could have been her 5-year-old son, it is clear that this woman had very little respect for motherhood or law enforcement personnel. As the story goes, this Randallstown-based—a town in Maryland, USA—woman is reported to have refused to open the door for police and even shot at them when they finally obtained a key to her apartment in order to serve her with a warrant for traffic violations.

I mean, really? How does a woman raising children simply behave so irresponsibly towards law enforcement personnel? Shooting at police with a child in your hand? Black women need to be called to order in this generation! Their whoredom and disregard for authority in the family and outside is simply a manifestation of their hypocrisy and feminist leanings upon a very stupid belief system. Surprising as it may sound, many of these black females happen to be church attendees and will even profess faith in Jesus Christ, the real deal when it comes to law, righteousness and order.

Conclusion What do we do about the whoredom of the black woman in this generation? This is a phenomenon that must be dealt with according to truth: too many whores in a nation does not speak well of its father figures or males. Even in Africa, where the role of fathers seems to be more revered than in modern day North American society, the black woman of North America has made a considerable inroad of negative whorish influence. Ghanaian women for example, now use terms like BABY MOMMA as though it were a badge of some kind of favourable honour to them. Gross!

Black men, it is time to call your sisters, mothers and daughters to order in the name of God. As well, it is time for church leaders to turn these whores out of the church, businesses and leadership units until they get right! Sin is a reproach to any nation.

The author is a communications professional with no interest in social media at this point in time.