Harlotry and Lawlessness, the Inheritance of the Daughters and Sons of Africa 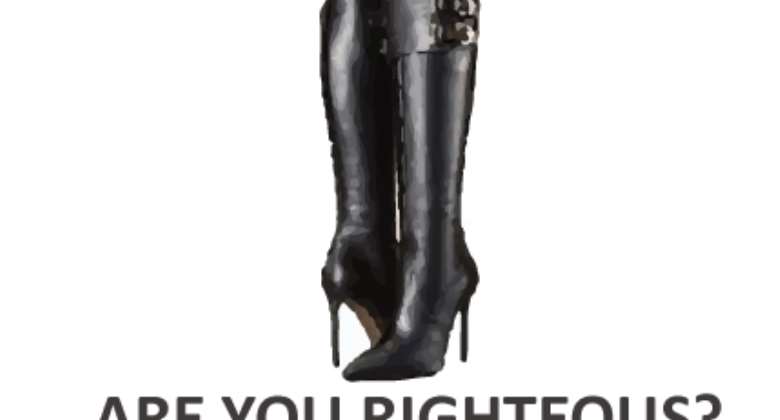 In the absence of a divine standard of righteousness in a nation, a nation will eventually become a heathen people with whores for daughters and visionless young men for sons.

Watch the nations of Africa carefully! Observe the cultural output that is being disseminated through the media. By so doing, you may very well notice a few things: a generation is growing up on filth, whilst another continues to birth what can be described as a heathen vision among the nations of the world’s second largest continent. Of critical importance to this “vision” are the roles of women and the spirit of harlotry. Do you see what I see?

Corruption versus Righteousness
Like other African media, recently, the Ghanaian media has been awash with critical analyses dealing with the subject of corruption.

No dispute here. Ghanaians generally understand the word corruption. This is especially when it comes to perceived political corruption. In this context, some writers even took the time to bring in their indigenous linguistic heritage to better decipher the term corruption. What many commentators seemed to be unable to do though is to effectively decide on the alternative to being corrupt. Usually, the tendency has been to defer to rhetoric like “in America this…”, or in “European countries that”. I will therefore offer up a glaring piece of diction to fill the void: righteousness!

Righteousness is the alternative to corruption. In its true sense, the term is an all-encompassing caption for a picture of a nation and what it should look like if corruption is efficiently dealt a blow. When we talk of righteousness, we are talking about a standard where the divine will confronts human excesses. It literally means that when human passions get out of hand, there is always an effective method by which to crush injustice and that which doesn’t lead to equity.

According to God, “Righteousness exalteth a nation: but sin is a reproach to any people” (Mishlei/Proverbs 14:34 KJV). In other words, according to the divine standard, corruption is rooted in sin and if not checked, will lead to the disgrace of a nation. Africa, check your sin!

When Harlotry is in the Bloodline
It is written, “A good [righteous] man leaveth an inheritance to his children's children…” (Mishlei/Proverbs 13:22 KJV). An inheritance is that which is passed on to another generation. Some leave their children land. Some, money. Some even houses and cars. But what about harlotry? Would you believe that some generations have repetitively inherited this spiritual trait?

If you are a woman, I want you to do some reflection. Ask yourself some questions as you ponder the conduct and social predicament of the three women that came before you: your mother, your grandmother, and your great-grandmother. What were their marriages like? Materially, how did they fare? And finally, what was the overriding leadership philosophy that governed their lives?

Just by doing this exercise, you may come to a conclusion: harlotry may very well be a major feature of your bloodline. Harlotry is more than just sexual immorality. It is the willingness to play ball with a spirit other than the Ruach ha Kodesh (Holy Ghost)! Harlotry’s influence comes in the form of words: counsel, music, movies and now, even ringtones!

The African Male as a Lawless Visionary
Sure, vision is a prerequisite for the proper functioning of any generation. But equally important is an applicable legal framework to govern a vision and its visionaries. A generation’s visionaries are supposed to be its young men. Ideally it is so. We are supposed to hear them before we can actually understand their vision, and if all goes well, follow. However, many young men do not articulate a righteous vision. And when you listen to Africa’s airwaves, it is not that difficult to see the evidence of the lawless African male visionary.

In Ghana, we may call him “Sark”? In Naija, he may very well be a “Wizkid”? All the way over in Tanzania, he hasn’t helped the mining industry much, but nonetheless he’s called “Diamond Platnumz”. Dare I ask in Swahili, “kwanini” (why)?

It is written, “Where there is no vision, the people perish: but he that keepeth the law, happy is he” (Mishlei/Proverbs 29:18 KJV). The former part of this piece of Yisraelite wisdom is often quoted in African circles. However, African tongues rarely wag on the latter part of the proverb that deals with law and happiness. So let me state it candidly: God’s law was intended to be an integral part of a divine vision and the hallmark of a divinely inspired visionary!

The Conclusion of the Matter
Have you ever asked the average African about the root cause of African social problems? For about twenty years I have. Despite the fact that the responses have mostly contained the subjective essentials, here is one word that I have observed most often used by African people to answer the question: CORRUPTION.

Rather than speak about corruption anymore, it is perhaps time for another generation to talk about righteousness.

Two critical factors that will have to be addressed in order to secure the future righteousness of Africa’s Generation Tumaini (Swahili for “hope”)—Generation Hope—is the influence of spiritual harlotry among young women and of course, re-orienting the minds of lawless male visionaries to see themselves as one of the foundations of love in their countries. Halleluyah! And the people said, “Amen?”

The author is a professional designer and communications specialist. He writes on contemporary issues of faith, science, politics, economics, righteousness and reason in the church and beyond.