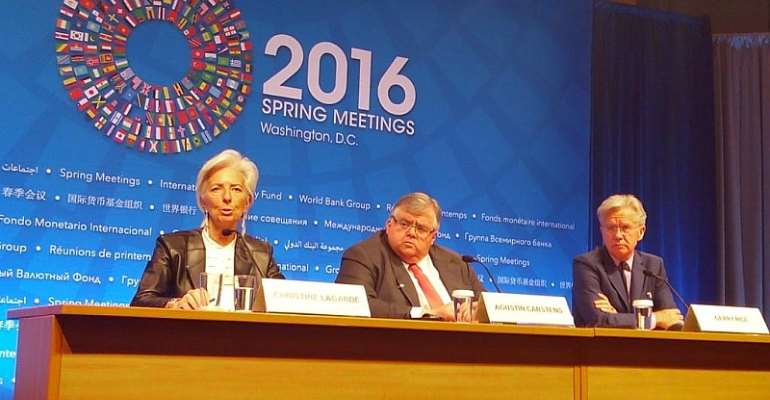 Countries that are facing the shock of drop in commodity prices on the world market would have to “use flexible exchange rate regime in order to operate as a shock absorber”.

That’s the advice of the Managing Director of the International Monetary Fund (IMF), Christine Lagarde, who says the Fund is alert but not alarmed at the slump in the global economy.

The Development Committee of the IMF and the World Bank Group (WBG) at its meeting in Washington, D.C, acknowledged that “global growth continues to disappoint in 2016”.

The Committee therefore expects the IMF and the WBG to closely monitor the risks and vulnerabilities in the global economy with a view to updating the Debt Sustainability Framework for Low-Income Countries.

The institutions are to provide policy advice and financial support for sustained, inclusive and diversified growth and resilience.

“We agree that emerging markets and developing countries are generally very prepared than in the past for a possibly less-favourable environment but many of them are exposed to tighter financial conditions, slowing capital inflows and currency pressures,” observed Agustin Carstens, Chairman of the Committee.

He says whilst the Fund is ready to support member countries to address the “complex and interconnected challenges”, clear and effective communication of policy stances would be key to limit excessive market volatility and negative spillovers.

Export dependent economies like Ghana have in recent years been challenged by the drop in crude oil prices and other commodities like cocoa and gold.

Madam Lagarde says countries that rely on commodity exports would have to be prudent in thinking through diversification models that identify and develop other sources of growth within the country.

“We urge the international community to take action in supporting these vulnerable populations who largely live below the poverty line” said the Committee, which believes IDA remains the most important source of concessional financing for the poorest countries.

The International Development Association (IDA) is a financial institution offering concessional loans and grants to the world’s poorest developing countries.

The IMF boss noted that international taxation – the implementation of a safe network of taxation systems – and the economic framework of the fight against corruption are two new areas the Fund will also need to turn attention.