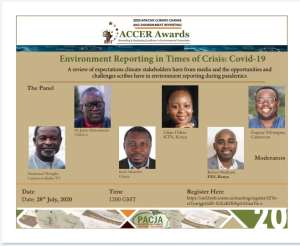 This, according to speakers at the webinar held to launch the fifth edition of the awards, is key even now as the world’s attention has shifted to Covid-19 pandemic at a time the ravages of the climate crisis continue to threaten the biodiversity.

Speakers, elected from media stakeholders from Francophone and Anglophone African countries, as well as non-media stakeholders from several agencies, including the United Nations and African Union Commission, said it would be wrong to view the Covid-19 as a stand-alone crisis, and consequently deny other pertinent issues media attention and focus by governments.

The webinar, themed “Environmental reporting in times of crisis: Covid-19” also called upon journalists to balance the focus given to policy makers in the boardrooms with that of the voices of the citizens for whom policies were made, because there is a part for them to play in tackling any crisis that befalls them.

While ushering in the panel of seven, the Pan African Climate Justice Alliance (PACJA) Executive director Dr Mithika Mwenda, said the organisation birthed the ACCER Awards in 2013 to help increase focus on climate change stories in newsrooms, where it was always pushed to the back burner.

“Many media houses do not find environment and climate change stories sexy, and therefore despite the fact that the climate crisis has led to the loss of lives and continues to distabilise us, much focus is given politics without the policy makers being pushed to be more accountable,” said Dr Mwenda, a multiple international award winner for the work he has done in increasing environmental conservation through his push for climate justice.

He said the initiative that targets African journalists had helped improve the focus on the continent’s story.

The webinar attended by at least 140 people from around the world, based the discussion of the day on the topic: “Environmental Journalism in Times of Crisis: Covid-19” with the panel focusing on the challenges of environmental journalism, the opportunities for journalists and expectations of non-media stakeholders on environment and climate change reporting.

Chief of the African Climate Policy Center (ACPC) of United Nations Economic Commission for Africa (ECA),Dr James Murombedzi, said Africa’s voice needed to be heard better in the global decision-making table, where policy frameworks were designed, but with less science from the continent to find solutions that would best work for us.

“There is adequate capacity in Africa to interpret the science and use the same to guide policy formation and citizens involvement in tackling crises,” he said, adding that it was sad that Africa relied on solutions suggested by people who had no clue what went on in Africa.

“How do journalists ensure that the citizens understand and participate in the response to the crises such as covid-19 and climate change,” he asked, then added that the role of journalists to inform was key in ensuring the right balance and democracy, which is “dependent on the information that goes out to policy makers and citizens. All these depend on the availability of information, of which media is the custodian”.

He urged journalists to enrich themselves with knowledge of the local happenings to enable them to push for accountability for development and policy issues.

Lilian Odera of Kenya Television Network, said it was the responsibility of media and journalists to correctly interpret technical issues to the society and policy makers, and appeal to the latter to at least prioritise matters of climate change, even though the Covid-19 is also a crisis.

“As journalists we are also in this same environment and are equally affected by the crises of climate change and even this coronavirus. What we must do is keep abreast with the developments by always knowing how to merge expert opinion, our observations and the society’s opinion to bring out what will in the end cause action from all quarters in tackling any crisis that befalls us,” said Ms Odera.

She said even though critical issues made it hard for journalists give climate change adequate attention, all was not lost.

Kofi Adu Domfeh of Ghana, who is also a two-time winner or the ACCER Awards, urged journalists to recognise their role and the opportunity they have in saving humanity by highlighting matters of climate change and not also shy away from competing for the awards that would reward them for such acts.

He, too, urged journalists to see the opportunity in writing about Covid-19 and appropriately linking it to other problems such as the climate crisis. “For example, Covid-19 has so many links to the environment we live in. The environmental implications of this disease, for instance, are so many, and through journalists we can help tackle them.”

Deputy Director General of Cameroon Radio TV, Emmanuel Wongibe said climate change and Covid-19 are twin crises that the world economies must balance between in response.

He was sad that the Covid-19 pandemic had pushed all other topics, including climate change to the back burner, but said there was hope for journalists to link the disease and its effects to several other issues, the climate crisis included. He said journalists needed to think beyond the normal to help push for prioritisation of environment and climate change in allocation of resources financial resources.

“Climate and Covid-19 crises are not events but both processes that will stay with us for long. They call for a sustained attention, and we have to juggle both in our sharing of resources,” he added.

Senior Policy Officer, Climate Change and Desertification Control at African Union CommissionLeah Wanambwa Naess, called forbalance between science, policy public opinion in stories from journalists, as well as checking of facts at a time of crisis, like the world was in. “Give us something solid, research and fact check, so that the stories do not give room for speculation but answer all the questions that the audience might otherwise seek from unreliable sources and cause unnecessary negative effects,” she said.

Panel moderator Eugene Nfrongwa, who is an environment journalist from Cameroon and an Energy Thematic Lead at PACJA, said it was painful how African journalists knew everything happening in the global scene but paid little attention to the developments within the continent concerning climate change and policies.

Augustine Njamnshi, the continental Africa Coalition for Sustainable Energy and Access coordinator, who is based in Cameroon sought media’s help in pushing for economies to accord climate change adequate attention to prevent destruction and deaths.

“Where has the money for stimulus projects for countries suddenly come from? They are only helping now because Covid-19 is running a 100-metre race, while climate change, which is here to stay, is running a marathon,” he said.

Several participants raised questions, some which were addressed by the panellists.

“Do we envision a greener recovery path,” asked Joe Ageyo, a Citizen TV journalist in Kenya.

“Are citizens taking ownership of the climate issue as a result of journalists’ work? A journalist has to look for a sexy topic. That has not helped address the climate crisis,” said Ibrahim Sane, a media specialist in Senegal.

Journalists have until September 30, 2020 to submit stories for the competition https://pacja.org/accer-awards-2020 through [email protected] The stories must have been published between August 2018 and August 2020, either in English or French. The categories fall under print, TV, radio and digital categories.