TAAT opens a new frontier for Wheat in Ethiopia 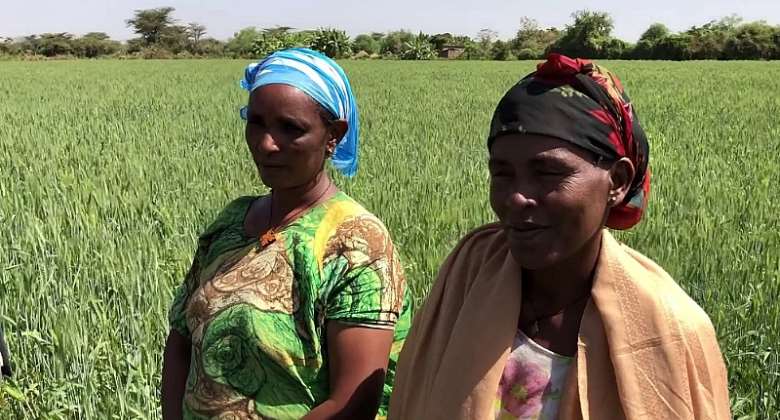 With an estimated 4.6 million tonnes of wheat per year, Ethiopia is Africa’s largest wheat producer. However, domestic demand is estimated at 6.3 million tonnes with rising incomes increasing the demand for wheat over the last decade.

Wheat is mostly grown in the highlands with better rainfall, from which 4 million MT of wheat grain are harvested. Demand for wheat is growing astronomically at 5% per annum, while production is growing at an anaemic rate of 1-2% per annum. Ethiopia currently imports 1.6 million MT of wheat, via the Djibouti Port, some 700 km from Addis Ababa, to meet the shortfall.

The gap in wheat supply is projected to double to 3 million MT in the next five years. Given the need to conserve scarce foreign exchange, gainfully employ its teeming youth, and remove the added cost to food consumers - from road transportation of imported wheat, the government of Ethiopia embarked on a wheat self-sufficiency campaign.

It is against this background that the African Development Bank in 2018, launched the Technologies for African Agricultural Transformation (TAAT) as part of its Feed Africa Initiative. TAAT’s main objective is to improve the business of agriculture across Africa by raising agricultural productivity, mitigating risks and promoting diversification and processing in 18 agricultural value chains within eight priority intervention areas.

The programme increases agricultural productivity through the deployment of proven and high-performance agricultural technologies at scale along selected nine commodity compacts which include wheat.

Led by International Centre for Agricultural Research in Dry Areas (ICARDA),the TAAT Wheat Compact is unleashing a wheat revolution in Africa by bridging yield gaps in traditional growing areas through better varieties, soil and water management, and taking heat tolerant and disease-resistant wheat technologies to a new frontier in irrigated environments in the Sahel.

The TAAT wheat Compact began to work with the Ethiopian government and seed companies to bulk up seeds of five heat-tolerant varieties released in Ethiopia under the African Development Bank-funded SARD-SC project.

By the end of 2019, the compact had established 20,000 ha of irrigated wheat, 10% of the target, in the low lands of Ethiopia, produced by some 28,000 small holder farmers. The farmers used an existing irrigation scheme used for cotton and other crops that has now been adapted to wheat as a “winter season” crop.

Through the deployment of excellent heat-tolerant varieties by a strong local team of wheat seed system specialists, agronomists, and breeders, and a strong commitment of government to provide seeds and fertilizer to farmers, the TAAT Wheat Compact was able to record rapid progress in Ethiopia.

Through its wheat compact, TAAT has succeeded in opening new frontiers in wheat production in Ethiopia with its scale up of climate-resilient, high yielding varieties in traditional rain-fed highland areas and heat-tolerant, high-yielding wheat varieties to expand wheat production in irrigated lowland areas.

Women and youths were engaged through the establishment of business-centres that promote rural entrepreneurship, and access to credit facilities for inputs (seed, fertilizers, and agro-chemicals) for both smallholder and large-scale farmers was improved.

About 21,000 ha of wheat is now being cultivated under irrigation in three river basins on programs spearheaded by the Government of Ethiopia. Moreover, new partnerships with large-scale cotton farms were established and expectations are for a bumper crop harvest with yields expected to reach 6 tons ha-1.

At an estimated average yield of 4 tons ha-1, a total wheat production of 840,000 tons is expected, which, at the projected conservative price of US$ 250, can save Ethiopia about US$ 210 million.

Convinced by the excellent performance of ICARDA’s heat-tolerant wheat varieties in Ethiopia’s lowland under SARD-SC, the Government of Ethiopia included in its wheat expansion plan, the establishment of 200,000 ha of irrigated wheat fields in the hot and dry (300-400 mm of rainfall a year) Ethiopian lowlands around the Awash river.

The innovation platforms set up by SARD-SC and reinforced by TAAT inspired the Government of Ethiopia to establish a high-level committee among its Agriculture, Finance, Trade and Industry, and Water and Irrigation Ministries, and expanded the wider adoption of new methodologies, significantly improving water resource management.

A unique aspect of TAAT is the use of innovation platforms, which are instrumental in creating networks and partnerships, bringing together committed and newly interested stakeholders including the private sector, at vertical and horizontal level.

Through linkage, information sharing, and debate, innovation platforms promote new technologies, raise the capacity of farmers, and link them to input and output markets at a strategic and operational level, bringing all stakeholders along the value chain together.

Elfnesh Bekele, one of TAAT Wheat Compact's beneficiaries in Awash region is already dreaming of a prosperous future. "We want to be examples to our sons and daughters on the use of modern farming methods to increase yields," she said.

"The increased income from my wheat farm has made it possible for me to put my children in a better school and i hope to buy a tractor someday," Elfnesh added.

According to Martin Fregene, Director, Agriculture and Agro-Industry at the African Development Bank, "the TAAT wheat compact has dramatically ramped up production of certified seed of heat-tolerant wheat varieties and putting these high productivity wheat seeds into the hands of millions of smallholder farmers in Ethiopia, Sudan and across other countries where the programme is being implemented."

"The African Development Bank believes that this is a real game-changer for Africa; expanded production will relieve the continent of an ever-increasing import bill of nearly USD $10 billion per annum,” Martin added.

Scaled up, TAAT offers the whole continent a way out of its spiraling wheat gap. Yet while it clearly proves its potential, challenges remain.

The development of climate and heat tolerant varieties must continue to be funded; mechanisation must be encouraged especially in low-adoption areas; financial support from governments remains crucial; biotic stresses (disease, pests, and weeds) need to be overcome, as well as abiotic stresses (drought, heat and soil salinity/acidity).

Above all, the ICARDA-led TAAT Wheat Compact will continue to encourage a people-centered approach. Further inclusion of women and youths, who in some cases make up 42 percent of the stakeholders, will be stimulated along with that of farmers associations.

This will hand management and ownership of the innovation platforms, and therefore the wheat production gains, to the stakeholders themselves, providing the key incentive to scale up across Africa and beyond.