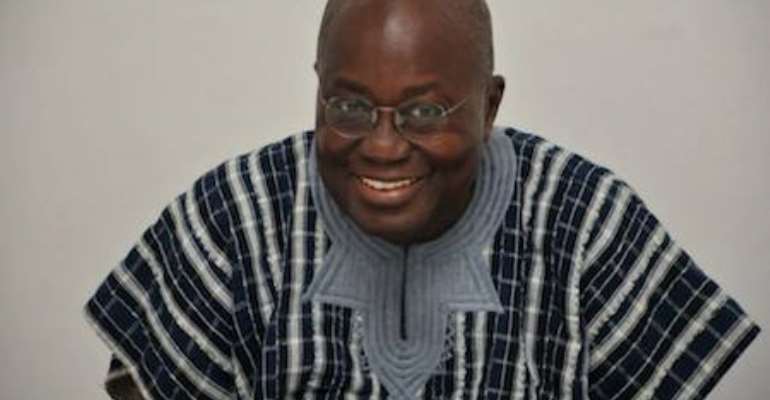 Wa, Jan. 20, GNA - Nana Addo Dankwa Akufo-Addo, 2016 Presidential candidate of the New Patriotic Party (NPP), has appealed to Ghanaians to stop the culture of introducing religious divisions into the debate on the former Guantanamo Bay detainees.

'Let us disagree by all means on the many political things that confront us, but I pray that we refrain from introducing religious divisions into the debate, for the issue at stake is not a religious one,' he said.

Nana Akufo-Addo made the call in Wa while paying tribute to the late Alhaji Alhassan Bin Salih, a former Member of the Council of State under the erstwhile Kufuor administration.

'I am certain that, if Alhaji Bin Salih were around today, he would be horrified at some of the careless language being employed by some in the discussions on the resettlement in our country of former Guantanamo Bay detainees', he noted.

The NPP Presidential candidate for the 2016 general election referred to Alhaji Bin Salih as someone who stood not just for the NPP but also fought for the peace and integrity of Ghana.

'The problem we face is yet another case of the failure of leadership by the President of the Republic and a sad example of his belief that he is answerable to no one, not even to the laws of the Republic, like section 35 of the Anti-Terrorism Act (Act 762), which, as President, he is sworn to uphold', he stated.

Nana Akufo- Addo stated that the law prohibits the transaction into which he had entered with the United States, adding that lawlessness at the highest levels of the State could not produce good governance.

'Since he claims that only Presidents Rawlings and Kufuor have the right to criticise him, I would have wished that he had found it worthy to consult both of our two former national leaders before he took this grave decision that has consequences for us all', he stated.

Nana Akufo-Addo noted that if President Mahama had done so, the Ghanaian people may well have been disquieting anxiety, in this time of justifiable heightened fear of global terrorism, that they were being led by a President who, ostensibly in the name of compassion, preferred to ignore laws designed to defend the most sensitive area of all - the nation's security.

He called for prayers for the nation and its leaders and for a good heart to guide them in all what they do.

Mr. C. K. Tadem, Chairman of the NPP Council of Elders described Alhaji Bin Salih as someone who was more helpful to those who showed sincerity and compassion towards mankind.

He noted that it was not just enough to glorify their members that have departed but for them to do their best to complete what they wanted to achieve before departing, that is to capture power from the National Democratic Congress.

Mr Tadem said Nana Addo is the only man that could save this country from the current power crisis and economic hardships that President Mahama and his government has plunged the country into.

He noted that it would take a united party to do that and called on all members to throw away any differences and rally behind the party's candidate for victory.

Alhaji Nurudeen Moomen, a brother of Alhaji Bin Salih called on all to use the occasion to build a relationship of trust among members and eschew enmity which he said was detrimental to the course of winning the 2016 elections. GNA

Akufo-Addo, Ken Take Ghana Back To HIPC – Mahama
35 minutes ago