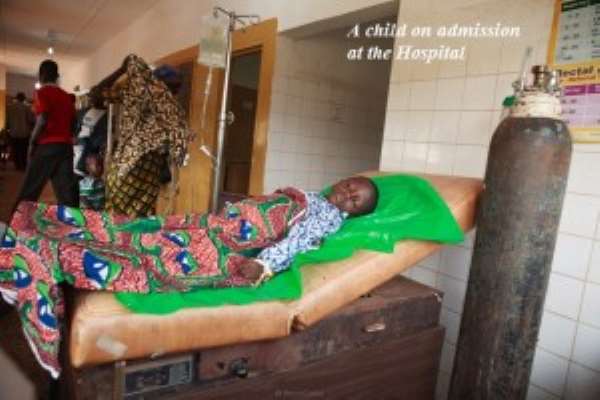 Looking at the alarming rate at which the pneumococcal meningitis disease is spreading in some parts of the Brong-Ahafo Region, a concerned Assembly Member of the Dadiese Electoral Area in the Wenchi Municipality, Mr. Amos Osei Kofi, who is also a Teacher at Wurompo L/A Basic School, has called on the Director General of the Ghana Education Service (GES) to close all schools in the Municipality to curb the rapid spread of the disease.

Speaking to The Chronicle in an interview, Mr. Osei indicated that during a brief by the Wenchi Municipal Health Directorate at an Assembly meeting, the members were sensitised on the mode of transmission of the disease, and that congestion was identified as one of the means for the spread.

According to him, members of the Wenchi Municipal Assembly were told that Bacterial Meningitis was contagious and that it could also be spread through the exchange of respiratory and throat secretions. Mr. Osei continued that if one had close contact with a person who had viral meningitis, the person may become infected with the virus.

He reiterated that considering all the factors, it was likely the conditions in the classrooms could boost the spread of the disease, because some of the classes are made up of over 45 pupils, and since the children know little about the disease, it could easily be spread.

According to the concerned Assembly Member also a teacher, the number of cases reported in the Wenchi Municipality, particularly from the remote areas, had increased after school re-opened almost two weeks ago.

Mr. Osei revealed further that one person has been reported dead in the Wenchi township, however, media reportage on the disease, its mode of transmission and how to prevent it has been very low, because the disease has been predominant in the remote areas, where accessibility is bad due to the poor road infrastructure and communication network.

The Assembly Member commended the Wenchi Municipal Health Directorate for proactive measures to sensitise members of the Assembly about pneumococcal meningitis and how it could be curbed in the municipality, but called on them to intensify it in the various communities.

The first pneumococcal meningitis disease case was first reported in the Tain District, in December 24, 2015. The Tain District is close to the Banda District, Wenchi, Berekum and Techiman municipalities. With the exception of Berekum, all the aforementioned districts have reported cases.

In the Techiman Municipality, a total of five deaths have been recorded out of 14 reported cases as a result of the meningitis outbreak, which is caused by bacteria that causes inflammation of the covering of the brain and spinal cord.

The Municipal Health Director of Techiman, Dr. Damien Punguyire, made this known to the Emergency Epidemics Management Committee of the Assembly’s meeting with stakeholders on Tuesday, January 19, 2016.

Dr. Damien Punguyire said the first case of the disease that came to the attention of the health authorities was reported on December 29, 2015, and so far, 14 cases in the Techiman Municipal and Techiman North District have been reported, with five deaths.

He said four confirmed cases – two of pneumococcal meningitis and two of meningococcal meningitis (W135) – saying the identification of W135 in the Municipality was a source of worry to the health authority, because of its tendency of causing massive outbreaks.

The signs and symptoms, the Health Director cited, included sudden onset of fever and severe headache, nausea/vomiting and bulging fontanelle in infants, while others include convulsion/coma, stiff neck, which result could be lethal if not treated promptly.

He, therefore, advised individuals with symptoms of the disease to report early to the nearest health facility. Dr. Punguyire said since his attention was drawn to the outbreak in the Tain and Wenchi Districts, he had sensitised health workers in the Techiman Municipal and Techiman North District to look out for possible cases.

The response of the Health Directorate, he said, include carrying out a record review across all health facilities, alerting all health facilities on the outbreak, and given cases definition, while others include contact tracing, visits to communities where cases came from, community durbars to educate people on preventive measures, and radio discussions.

He said the disease is transmitted by direct contact with secretions from the throat and respiratory tract of an infected individual and carriers, adding that the dry weather condition causes minor cracks in peoples' throats, which facilitates the spread of the disease.