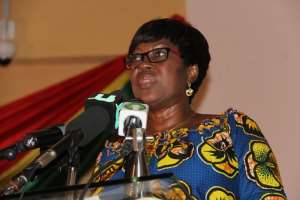 According StarrFMonline.com sources, the minister submitted her resignation letter to the Presidency on Tuesday.

The Chief of Staff Julius Debrah had earlier in a statement following the massive public outcry against the significant amount that was used for the rebranding, ordered the AG to probe the matter and furnish his office with her findings.

The AG submitted her report on Tuesday. It is unclear what is contained in the AG report.

Smarttys Productions, the company which won the contract to rebrand the buses is yet to officially comment on the matter but industry experts say the amount charged by the company, owned by a known activist of the ruling party, is outrageous.

Smarttys is owned by actress Selassie Ibrahim.
A pro-forma invoice dated 17th July 2015, and signed by the Accounts Officer of Smarttys Management and Productions and copied to the Ministry of Transport, put the total cost of branding for each bus at Ghc30,420.00.