This Branding Thing Is Very Bizarre, But… 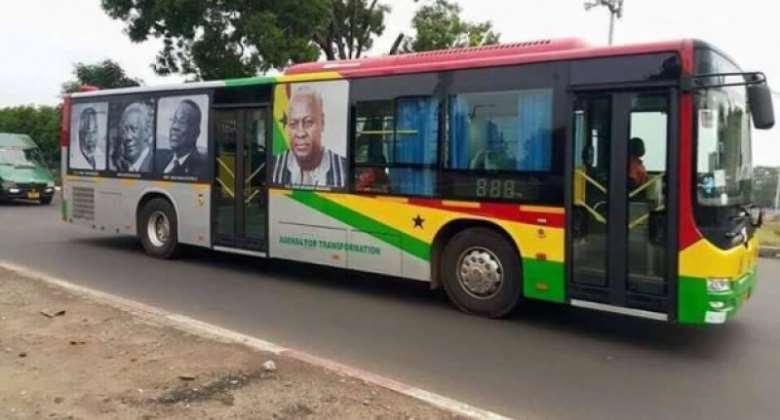 The issue of the so-called branding of state-owned and operated intra-city buses is admittedly bizarre, but it is absolutely nothing new. It clearly falls into the category of misplaced policy priorities, except that in this case it well appears that a decision was taken at the highest levels of government to scam the Ghanaian taxpayer (See “GH₵ 3.6 M Branding Saga: ‘We’ve Been Fooled’” Starrfmonline.com / Ghanaweb.com 12/23/15).

At this juncture, I am far less concerned about the reported cost involved, although the latter is indisputably criminal enough to warrant a head or two on the chopping block. What I am more concerned with here is the real intention and/or objective behind this entire branding thing.

This is what nobody seems to be talking about – the fact that 2016 is an election year. And what all governments in power in Ghana, irrespective of ideological suasion, have been known to do is give themselves a leg up on the electioneering campaign trail.

We witnessed the same process at work in 2012, when the then-Mills/Mahama government of the National Democratic Congress (NDC) was widely reported to have handed out free sedans or salon cars to young pretty university and college women students imprinted with the colors and other insignias of the ruling party.

This clearly appears to be the entire point of the branding or rebranding exercise. Otherwise, why bother to slap the giant images of President John Dramani Mahama – in the name of having our city buses splashed with the images of past presidents – when Mr. Mahama is clearly not a past president but a megalomaniacal incumbent running for reelection? And the same gesture or privilege is not being extended to the most formidable opponent of the president, Nana Addo Dankwa Akufo-Addo? I mean, whatever happened to the sacred concept of social justice here? And, by the way, whoever said the most important Ghanaian citizens were only those who have either been elected president or shot their way to the presidency at one time or another?

Are there no national heroes in the personalities of Messrs. J. B. Danquah, S. D. Dombo and George “Paa” Grant, not to leave out the illustrious likes of Messrs. Kobina Sekyi, John Mensah-Sarbah and J. E. Casely-Hayford, who have done far more to advance the cause of Ghanaian politics and culture than just those who have either been named or named themselves President of Ghana? On the women’s side, of course, readily comes to mind such equally distinguished and illustrious names as Theodosia Asihene Okoh, Annie Jiagge, Cecilia Koranteng-Addow and, of course, Obaapanyin Nana Yaa Asantewaa.

You see, as a student of global African history and culture, when I hear the term “branding” or “rebranding,” the first image that immediately assaults my senses is chattel slavery, the at once heinous and repugnant crime of the merchandising of African humanity in the modern era between the fifteenth and nineteenth centuries.

But, of course, there is absolutely nothing remarkable about the fact that what clinically retarded faux-socialists like the key operatives of the National Democratic Congress, and before the latter the Kwame Nkrumah-led Convention People’s Party (CPP), do best and better, for the most part, than their opponents is wantonly waste taxpayers’ money on the inexcusably obscene art of self-promotion.

In the 1960s, we saw the images of a hopelessly megalomaniacal Mr. Kwame Nkrumah mounted around the country in the form of statuary icons and monuments, textbooks, on the country’s monetary currency, the Cedi – and pesewas as well – and on our postage stamps and clothes and dishes.

And so when Dr. Mahamudu Bawumia, the three-time Vice-Presidential Candidate of the New Patriotic Party (NPP) and former Deputy-Governor of the Bank of Ghana, bitterly laments the fact that the Mahama government’s so-called rebranding of our city buses had not been creatively and wisely done by the solicitation of paid advertisements from some of the multi-national corporations with branches in the country, and even from privately owned Ghanaian firms, it is quite clear that Dr. Bawumia has yet to fully appreciate the politically dirty red-gilt language of the proto-communist-oriented National Democratic Congress.

But what is most worrisome here is that even mega-states like Russia and China, which the NDC apparatchiks clearly look up to for marching orders, have since ages abandoned this criminally primitive approach to governance and politicking.