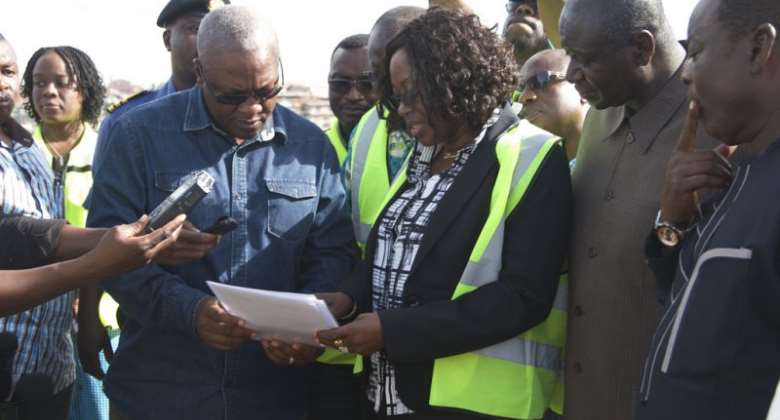 President John Mahama has accepted the resignation of Mrs. Dzifa Aku Attivor as Minister for Transport, an official statement from the Flagstaff House said.

Her resignation follows concerns raised over a contract to spray and re-brand 116 new buses procured by government to improve transportation in the country’s major cities.

A statement signed by her special assistant Egypt Kudoto to announce her resignation said: “Hon. Mrs. Dzifa Attivor, Minister of Transport wishes to inform the good people of Ghana that, as the Minister with oversight responsibility for the activities of the Metro Mass Transit (MMT).

“She has tendered in her resignation as Minister due to the current issues surrounding the branding of the 116 buses.

“She further wants to take the opportunity to thank her party for the opportunity offered her to serve, first as a Deputy Minister of Transport under the late John Evans Atta Mills, and later as the Substantive Minister. Mrs. Attivor also wishes to thank the President sincerely for the honour to serve in his government. She has already communicated this decision to His Excellency President John Dramani Mahama through the Chief of Staff, Mr. Julius Debrah."

Probe
The Chief of Staff Julius Debrah had earlier in a statement following the massive public outcry against the significant amount that was used for the rebranding, ordered the AG to probe the matter and furnish his office with her findings.

The AG submitted her report on Tuesday. It is unclear what is contained in the AG report.

Smarttys Productions, the company which won the contract to rebrand the buses is yet to officially comment on the matter but industry experts say the amount charged by the company, owned by a known activist of the ruling party, is outrageous.

Smarttys is owned by actress Selassie Ibrahim.
A pro-forma invoice dated 17th July 2015, and signed by the Accounts Officer of Smarttys Management and Productions and copied to the Ministry of Transport, put the total cost of branding for each bus at Ghc30,420.00.