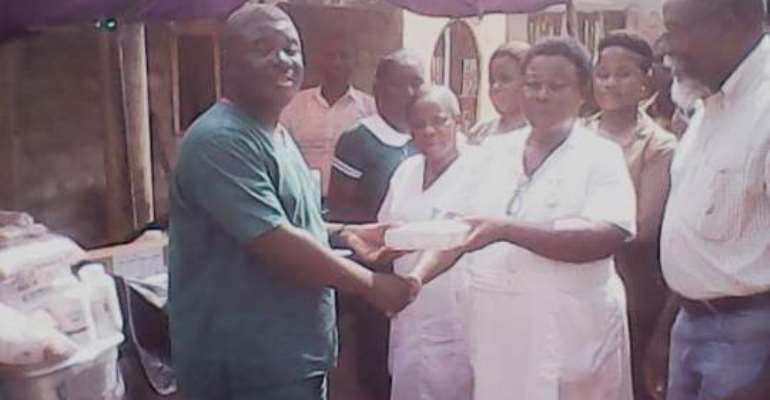 Akosombo (E/R), Dec 14, GNA - Mr. Tony Kokutse, a Ghanaian Nurse based in Texas USA, on Monday, donated four bags of assorted medical drugs worth $24,000.00 to the Asuogyaman CHPS Clinic at Tusker, a suburb of Akosombo in the Eastern Region.

The CHPS Clinic is located in a village within the Mangoase Electoral Area at Akosombo.

The Nurse who donated on behalf of Karen Hall Director of CTOMA of Texas and Scott Hudson of Hudson Staffing of Tennesee all from the United States of America said the two families had often wanted to assist peasant farmers in the remote villages of the country who hardly come by medical treatment.

Receiving the assorted drugs, Madam Charity Ahiati, the Superintendent Enrolled Nurse In-Charge of the Community Health Planning and Services (CHPS) at the Tusker village was grateful to the donors, and said it was often difficult to raise money to purchase drugs to replenish their stock.

She said moneys from their outfit had been locked up at the National Health Insurance Scheme (NHIS) for a long time.

She said about 238,000 patients from the other villages receive treatment at the Clinic.

She appealed to other philantropists and voluntary organizations to also come to their aid and assist them construct a befitting Clinic which they have begun, to cater for the health needs of the villagers.

Dr. John Nkrumah Mills, a former Director at the Volta River Authority Hospital at Akosombo and current Vice-President of the College of Physicians and Surgeons appealed to the farmers in the villages not to buy drugs anywhere and administer, but rather visit the hospitals and clinics for a good prescription of drugs for their health.

He expressed gratitude to the donors.
The visiting nurse who was trained in Kansas in the United States of America, spent some time examining the people around and educating them on the blood-sugar-levels.