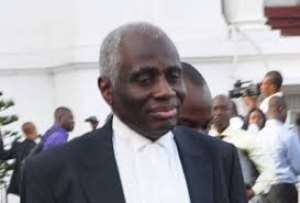 I expected an unconscionable reprobate like Mr. Tsatsu Tsikata to attempt to use his largely unproductive Legon and Oxbridge law degrees to intimidate Mr. Kobina Tahir Hammond, the New Patriotic Party’s Member of Parliament for Adansi-Asokwa and former Deputy Energy Minister under the Kufuor-led New Patriotic Party (NPP) government.

Mr. Tsikata, a widely alleged mastermind of the bloody and extortionate travesty that were the Rawlings-led Provisional National Defense Council (PNDC) People’s Courts of the 1980s, is suing Mr. Hammond for defamation because the latter is alleged to have stated that monies, in the form of gratuities, may have been wrongfully paid to the former Executive Director of the Ghana National Petroleum Corporation (GNPC) – (See “Tsatsu Sues K. T. Hammond for Defamation” Modernghana.com 12/6/15).

It may be recalled that recently, highly placed elements in the Mahama-led government of the National Democratic Congress (NDC) initiated a corruption investigation against Mr. Hammond, primarily related to the sale of the infamous oil-rig ship that had been purchased by Mr. Tsikata, in the latter’s capacity as GNPC Executive Director, that had allegedly been allowed to lie idle and underutilized, even as the succeeding Kufuor government was forced to shed millions of dollars in the form of inherited contractual obligations.

Mr. Hammond would yeomanly and patriotically assist in disposing of this patent white elephant at the least amount of debt liability to the Government of Ghana contractually possible. The aforesaid investigation was part of the Mahama-hatched scam-artistry using the one-man Apau Commission, expressly established to vindictively railroad some key cabinet appointees in the erstwhile Kufuor administration.

Well, having performed a fairly good hatched job, Justice Yaw Apau, then an Appeals Court judge, would be promptly elevated to membership of the Supreme Court of Ghana. The real target of defamation and possible destruction, it has been widely alleged by the national media, was President Mahama’s most formidable political opponent and three-time New Patriotic Party Presidential Candidate, Nana Addo Dankwa Akufo-Addo.

Whatever the case may be, one thing is gapingly and inescapably clear: and it is the fact that this dastardly attempt to torpedo the presidential ambitions of the former NPP-MP for Akyem-Abuakwa South seems to have backfired in the face of President Mahama and his cold-calculating minions and associates at the Jubilee-Flagstaff House. And even as I recently noted in a previous article on the same subject, in all likelihood, the government wishes it had not so rashly and unwisely attempted to literally throw Mr. Hammond under the bus, by using the quite vociferous Adansi-Asokwa MP as a scapegoat.

As far as I have been able to verify, at absolutely no time did Mr. Hammond publicly impugn the integrity and reputation of Mr. Tsikata, assuming hypothetically that, indeed, the Rawlings-fired GNPC Executive Director has any integrity or enviable reputation to protect.

To be certain, what Mr. Hammond has said is that he does not recall Mr. Tsikata’s being paid any amounts of money in the form of gratuities while the Kufuor administration held the reins of governance from January 2001 to January 2009. It is quite obvious that Mr. Tsikata might have been paid some monies by the GNPC management after the Kufuor government exited the scene.

We know this because some GNPC officials have appeared before Parliament and wistfully admitted that, indeed, some monies were paid to some former GNPC executives, including Mr. Tsikata, against the legal advice of some presumable corporate legal counsel. Mr. Tsikata, on the other hand, has publicly and vehemently denied that any such payments have been made to him.

I have yet to familiarize myself with the full details of what transpired between the present GNPC management and Parliament. I hope to do so in due course. Nevertheless, it well appears to me that an ego-contused Mr. Tsikata is out to shame-facedly strong-arm his way out of the latest scandal involving his irreparably battered integrity and long-eviscerated reputation.

And Mr. Hammond is highly unlikely to be successfully scapegoated in the process. Tsatsu had better look for prime targets of his schoolyard bully’s victimization from among the ranks of the Anlo-Ewe-minted and dominated National Democratic Congress government. He is decidedly on a wild-goose chase, if he really appreciates what I am talking about.