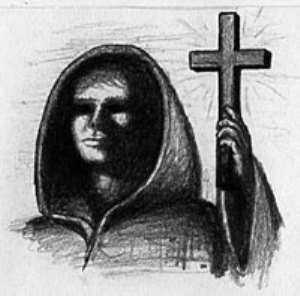 THE CHURCH (Christendom) in Ghana has woefully failed the nation, a US-based Ghanaian Evangelist, Jacobs Boateng has said.

According to the preacher-man, the church in the country over the years has failed to call to order our politicians, businessmen, managers and technocrats who are swimming deep in corruption, greed and other anti-social vices in our society against the expectations of God.

"In view of this, if I put one and one together, I can say without looking at my shoulders that the church has failed the nation," Evangelist Boateng told the paper at the weekend.

"The painful aspect of the situation is that most of our pastors have scarified or crucified the true gospel that is based on the salvation which is the foundation or the pillar of the gospel and replaced it with prosperity and materialism massage," he said.

"On the more serious note, some pastors have now buried repentance messages and are now preaching about how they could help people to secure overseas clearance (visas) to travel abroad without pointing out the sins of the people in our society," he observed.

"With the shift of the gospel message, our corrupt leaders have the field day to intensified their corruption, selfishness and evil practices which are creating a lot of havoc and drawing the nation's progress backwards," he said.

Evangelist Boateng told The Chronicle that despite all the short falls in the church that were being pointed out, there was still hope for Ghana if the church would be up and doing and put its act together.

He suggested the need for the church to go back to the Bible day Christianity where the believers stood against wrong doings and look for the realities in the scripture, adding that a day of reckoning was just in the corner and if God did not spare evildoers in Sodom and Gomorrah or people like King Herod who were found wanting, how would HE spare the present generation which had been given a long rope to change through grace?

The evangelist advised the politicians in the country to see politics as sharing of ideas from the platform and service to God and mankind, and bury the attitude that portrayed politics as a life and death venture. "What do we have that was not given to us?" he asked.

"So you see, there is too much hypocrisy in the church in Ghana; we should be speaking against wrong doing in our society but that is not happening because most of the Pastors are also in the same corruption and wrong doing that others have found themselves," he said.

He observed that one of the things that had brought the church to its sorry state was the desire for materialism.

"Because of the materials that some of the leaders were expecting from the corrupt and smugglers, they refused to see all the dubious deals that were going on in our society or even in the church," he added.

Evangelist Boateng further accused the leadership of the churches in the country for turning their belly into gods and as a result, pretending they had not been aware of the corruption and wrong doing in our society all these years.

He noted also that even when there were chances for the pastors to bring corrupt politicians managers and businessmen to order, because of the big logs in the eyes of the leaders, they could not see the misdeeds of the people.

"Whether we like it not, the duty of the Church is to speak against the evils in our society; the church leaders must define the line between them and the politicians in the country and desist from acts that suggest they were in the pockets of some people," he said.

Because of the attitude of some Pastors, the church is making itself irrelevant, our people are living in sin but are expecting God's blessings. Instead of the preachers warning them to turn from their sinful ways, what are we seeing ?" he womdered.

"Most of the Pastors know that some of their members do not deserve the cars they are driving and the mansions they occupy. Instead of the leaders cautioning these members to amend their ways, because of their belly, they refused to see anything wrong with the dubious deals these members who could be businessmen, managers or politicians engage in," Evangelist Boateng pointed out.

According to him, the Church was aware that a deputy minister of the current government had snatched somebody's wife but was quiet while the government is also silence over this unpardonable behavior which needed not to be mentioned among the high office holders of the country.

"We were in this country during the 2000 elections when some pastors prophesied that God had told them that Prof. Mills was going to win the elections. If that prophecy had come to pass, do you think that these church leaders could gather the courage to speak against any wrong doing in his administration?" he questioned.

Evengelist Boateng therefore charged the church and its leadership to redirect the focus of church to meet God's expectations.