The Book Exposing The Imperialism Of The Church: “Unteshwari Mata Ka Mahant” 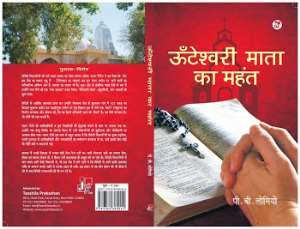 The controversy about Mother Teresa had not subsided, and there is yet another book by P B Lomeo “Unteshwari Mata ka Mahant” has raised a serious question on the functioning of the church within the Christian society.

The book titled ‘Unteshwari Mata ka Mahant’ is about Father Anthony Fernandesfrom the Society of Jesus, (SJ) who had spent 38 percent of his life to increase the number of sheep. The book exposes the layer by layer about the bad consequence meted out to priests and nuns who dare to disobey the dictates of the church.

The book makes some startling revelations about the Catholic Church system and tells the story about the modus operandi of conversion in the North Gujarat. One can really admire the sharp brain of the foreign missionaries who were quick to point out that the camels were the most important animal in the region. It is the lifeline of the desert area. Therefore, they created a new Goddess, Unteshwari Devi, who protects the camels in the region. She is ‘kuldevi’ of the camel protectors Jesus followers.

Camel has become an integral tool to meet their larger objectives. So, with the help of foreign funds, they purchased a 107 acre tract of land in the Budasan village in Mehsana region and constructed a Chaburara. They proclaimed that this is Unteshwari Matachabutara.

When Father Anthony Fernandes came to know that his main task was to convert people of Northern Gujarat into Christianity, he was devastated. He had never expected such a black face of truth.

He understood that all welfare related activities are its social service, health or education was mere ahogwash. They were instruments to lure poor people. Domestic missionaries were even two-step ahead of foreign missionaries. They wanted to have pie in the foreign funding. Father realized that all development activities run by the church were hogwash and they were directed towards converting more and more tribal people towards the Christianity.

Father Anthony Fernandez is not alive today. He died on May 11 2014 in Varanasi. He was a true priest, true Indian and a true patriot. He was born and brought in Mahatma Gandhi’s Gujarat. He grew up listening to religious songs of Narsingh Mehta- Vaishnav Jan te Tene kahiye ji Peed Paraye Jaane Re’. He became priest to serve the people. Northern Gujarat receives a lower amount of rainfall. The area is very poor. He wanted to help the people. However, when he knew the true motive of church, he started resisting. But, could he do anything? He was a lone fighter in the system.

Christianity has always been passionate to win the world. Anybody who has tried to oppose has been forced to succumb before these imperialistic forces. They are following the same policy in India. Any nun or priest who dares to oppose the church system met the fate of Father Anthony Fernandes. Church never accepts dissent. This is why many priests and nuns have set up an organization’ Catholic Church Reformation Movement’ to save from exploitation.

Famous Gandhi follower, Shree Kumarappa (a Catholic Christian) was of the view that western powers had four pillars: Army, Airforce, Navy and Missionary. They want to win the whole world. There is one more hidden pillar ‘Media’ that helps them when required. Currently, they have a deep knowledge of the resources of the developing and under-developed countries, and it is even more than their own countries.

The book exposes an innovative way to steal camel. And, it is not just about camel, but also about the culture, social unity and harmony which can be disturbed. These missionaries never oppose a converted Christian girl to marry in his original caste. They are of the view that she will ultimately convert the whole family.

You must have heard about the term ‘Parallel Government’, but do you know about the face of such a government. Once you read this book, you will start understanding the face of a parallel government. You will know how the Vatican is running its global empire from the 107 acre land. The story of the Father Anthony Fernandes is a great example of that empire.

Everybody who understands the importance of nationalism and sovereignty must read this book. The book gives them a message to return to their own fold. The book also portrays the pathetic condition of converted Christians and the dangerous policies of the church system. The book also offers a solution to stop this trend. The book tells that every religion has been established to act as a safety valve. However, when it becomes a tool in the hands of the vested interests, it harms the humanity. Now, the time has come to understand and expose their real intentions so that the humanity can be saved.