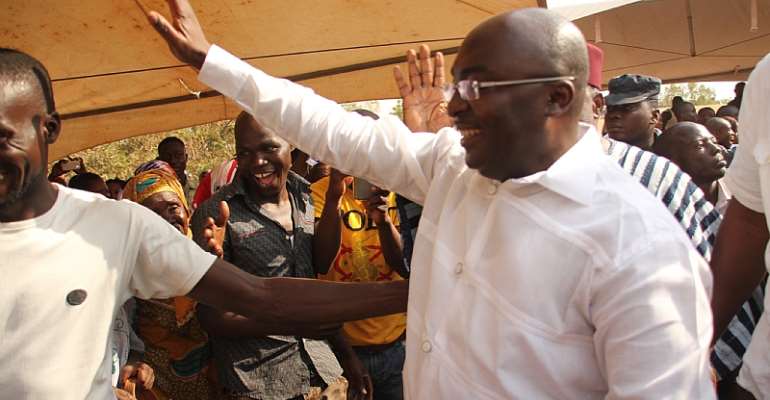 In his recent delivery at Central University (CU) in Accra, Dr. BAwumiah sort among other things to paint a gloomy picture of Ghana's present economic situation by referencing a number of sources to back his assertions. During the delivery of the 70 page paper, the astute Banker and economist claimed among other things that, he was informed by his sources that 'recently, Ghana was sanctioned by the AFDB among 5 African nations for nonpayment of debt'

The NDC was quick to jump on this petty issue to cast doubt on the whole presentation. Ministers were sent to radio stations to make presentations to challenge Dr. Bawumiah on this simple claim, while negletting the most daming aspect of the lecture. In one instance, Deputy minister of information appeared on KABA'S 'ekosii sen' show with documents to prove that Bawumiah lied, but in so doing, he ended up proving Dr. Bawuah right by concuring with his claim that Ghana was indeed sanctioned by the fund, though he tried hard to avoid the word sanction.

According to the deputy minister of information, Ghana was not sanctioned by AFDB as claimed by Dr. Bawumiah. He however, admitted that Ghana was placed erroneously under sanctions for just a day on the 17th of February 2015, and when the Bank's attentioned was drawn to the error, it was corrected the following day which was 18th.

Let me recaptulate what the minister presented on the show and identify the obvious lie in his presentation which neither KABA nor the NPP man on the program that day could discern. They allowed the minister to get away with 'murder' by making highly falacious argument without being spotted;

to honor the debt that were due on the previous December 31st, 2014

3. He also claimed that Ghana had 30-days grace period before any sanctions could be

imposed following the maturity of the debt.
4. He claimed that, the erroneous blacklisting was done on 17th February and

corrected on 18th(the next day)
Now here is my analysis; if what the minister presented, as repeated above, is anything to go by, then clearly, Ghana was under sanctions from February 1st until 18th. Clearly by January 1st 2015, Ghana was in default, the Bank , applying its own internal procedures, waited for the grace period of 30 days to elapse before taking any action against Ghana. The 30 days elapsed by January ending at which time Ghana was still in default. The Bank utilised its standard Finance practice, and allowed additional 15 days until mid-February to make sure that if Ghana had effected any payment by the 31st January, which marked the end of the grace period, it would reflect in their books before issuing that sanction memo placing Ghana under sanctions from February 1st onwards.

.When Ghana made those 3 payments on the 14th, 15th, and 16th, the country was indeed under sanctions already for non payment of debt that was 44 clear days past due(14 solid days after the grace period)

From the foregoing analysis, it is quite obvious that when the sanctions were issued on the 17th of February, the 3 tranches had been paid 3 -days prior to the issuing of the sanctions and when the Bank was informed of the payments and upon reflection in their books, the bank took down the sanctions on the next day which was the 18th of February.

Dr. Bawumiah was absolutely right in claiming that Ghana was recently placed under sanctions by the AFDB and therefore, I am calling on all those who sought to malign him based on this particuler issue to do the honorable thing and apologise to him since after all, he was right.