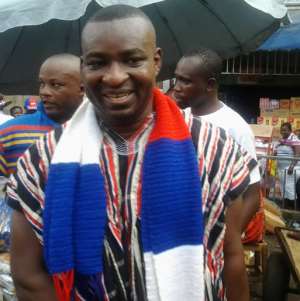 The Ashanti Regional Chairman of the NPP, Bernard Antwi Boasiako, aka 'Wontumi', has taken a swipe at ex-President Jerry John Rawlings for his unusual silence in the face of the difficulties in the country today.

He stated that President Mahama and the NDC administration are mismanaging the affairs of the state and looting state coffers, thereby worsening the plight of the ordinary Ghanaian, yet the ex-President has remained silent.

According to him, worst things than what happened during the late President Hilla Limann's era, which prompted Mr Rawlings to stage a coup in 1981, were happening in the current NDC administration.

He therefore wondered why Mr Rawlings has been silent lately even as President Mahama and his government have rapidly plunged the country into adverse poverty through corrupt practices and mismanagement.

According to Wontumi, worse issues than what forced Rawlings to stage a coup were happening in the country now 'so he should begin to lambast the government as he did to previous administrations.'

The Ashanti Regional NPP Chairman was speaking at the People's Forum Programme of the NPP which was organised by Ashh FM in Kumasi for the people in the Suame Constituency on Friday.

According to him, presently the president and a few party cronies are milking the state as majority of the people are encountering difficult economic times.

In the face of this gross injustice being meted out to Ghanaians by the NDC administration, Wontumi said he was surprised that Mr Rawlings had astonishingly kept mute as if all was well.

He recalled how Mr Rawlings was always quick to criticise the Kufuor and Mills administrations, albeit sometimes unjustifiably, but was uncharacteristically quiet now.

He noted that petrol is currently being sold to Ghanaians at an exorbitant price whilst the current erratic power supply is bringing many businesses to their knees, asking, 'why is Rawlings acting as if he is not in the country?'

Wontumi said Mr Rawlings would save his image if he began chastising the President Mahama administration for mismanaging the affairs of the country, adding, 'the Rawlings that we know is not dumb.'

He was of the view that Mr Rawlings is losing his popularity and importance in the nation's politics due to his weird behaviour of keeping mute as President Mahama continues to mismanage the country.

Wontumi strongly kicked against the Kumasi Metropolitan Assembly's (KMA) decision to relocate traders at the Kumasi Kejetia bus terminal to a new place for construction works to take place at Kejetia.

He said from all indications Kojo Bonsu's KMA would displace the poor traders, stressing that until a proper relocation plan was made available the traders would not leave the terminal.

Wontumi recalled how the KMA ejected traders at the Krofrom Market about five years ago to reconstruct the market, noting that 'but the market is far from completion and the affected traders are now wallowing in poverty.'

He said the NPP, of which he is the regional chairman in the Ashanti Region, will not sit aloof for the KMA to subject traders of the Kejetia bus terminal to a similar ordeal.

The NPP chairman said he was surprised at the KMA's decision to reconstruct the Kumasi Central Market and the Kejetia bus terminal at a time when the assembly was still struggling to construct the Krofrom Market.

Wontumi said the leadership of Kejetia traders have appealed to the NPP to come to their rescue, stressing that until the KMA makes public a proper relocation plan the traders will not move for the project to start.