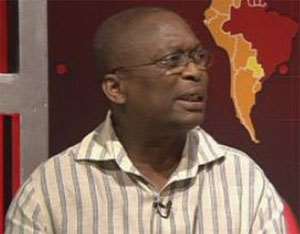 The man whose "slappocratic" father, Mr. Kofi Baako (the latter once slapped Mr. Archibald Casely-Hayford, right in front of President Nkrumah, to the latter's incontinent delight, because Mr. Casely-Hayford had dared to question the propriety of the fetishistic glorification of the proverbial African Show Boy by Mr. Baako's theo-ideological or "theodeological" faux-theory of "Nkrumaism"), would have Ghanaians believe that the PDA was a perfect instrument of torture and terror of its time, except that it was the flawed practical implementation of the same that left much to be desired. Needless to say, I never heard such poppycock on this subject all my life, until now, that is.

The fact of the matter is that even the British who crafted the PDA, as a veritable instrument of oppression, and repression, of conscious, educated, enlightened and freedom-loving colonial subjects, did not implement this sadistic instrument of tyranny in Ghana, even as the PDA's most celebrated victim, Dr. Joseph (Kwame Kyeretwie) Boakye-Danquah underscored, time and again, in his prison letters earnestly pleading with the PDA's Ghanaian architect on the imperative need for the observation and compliance with the civilized legal and democratic principle of Habeas Corpus in Ghana.

Well, Mr. Baako claims that but for its egregious implementational abuse, the PDA was perfect for the period in which it was enacted. And so the son of Mr. Kofi Baako would do Ghanaians and himself great good by explaining precisely how the PDA ought to have been implemented in order to make it less abusive and beneficial to Ghanaian society at large. I also find it insufferably absurd to hear Mr. Baako assert that it was the poor process of implementation that "undermined [the] moral authority" of the PDA.

What "moral authority" or justification had such an inexcusably arbitrary edict, which sought to totally and summarily silence the most vocal, civically conscious and democratically forward-looking citizens in Ghanaian society? For those of our readers who may not know or appreciate the most salient details of what the PDA represented, the latter empowered an erratic, clinically paranoid, extortionate and wantonly dictatorial President Nkrumah to whimsically cause the arrest and imprisonment of just about any Ghanaian citizen he capriciously desired to have locked up behind the wrought-iron bars of the Nsawam Medium-Security Prison, or any other prison establishment anywhere in the country, for five years without trial. It was also indefinitely renewable on expiration.

What made the PDA even more atrocious and morally and legally untenable, was the fact that the agents effecting one's arrest did not have to explain any reasons or motives behind one's arrest. Under the British colonial dispensation, the exact opposite protocol prevailed - that is, one was read the legal breach, or violation, for which one was being arrested, as well as one's rights and responsibilities under the law.

What Mr. Baako sheepishly prefers to literally sweep under the carpet, but which Ghanaians need to know in no uncertain terms or without any caveats, is that the PDA had absolutely no redeeming features whatsoever. And so when Mr. Baako observes that: "I have no doubt in my mind that it [the PDA] wasn't handled with the appropriate sensitivity and humanism," the editor-publisher of the New Crusading Guide could only be underscoring the inescapable fact that the key operatives of the Convention People's Party regime, including Mr. Baako's own father, Mr. Kofi Baako, were irredeemable nefarious moral reprobates.

Further, Mr. Baako apologetically makes the following morally telling observations: "I have no difficulties conceding that the situation in [sic]which Dr. Danquah found himself in prison, the CPP leadership, Under Dr. Kwame Nkrumah and key members of which were my father and others, could have handled the situation better." Well, let the younger Mr. Baako explain precisely how he wold have handled the "Danquah Situation," as he so euphemistically and mischievously cast it.