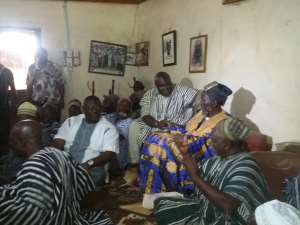 Nalerigu (N/R), Feb. 5, GNA - Some officials from the Ministry of Local Government and Rural Development, led by the Minister, Mr Julius Debrah have began a week-long working visit to the Norther Region.

Mr Edwin Nii Lantey Vanderpuiye, a Deputy Minister, also paid courtesy calls on the Chiefs of Tamale and its environs, as well as the chiefs of the Tolon, Kumbungu and Savelgu Districts, while Mr Emmanuel Kwadjo Agyekum, also a Deputy Minister, is leading a team to the East Gonja, Nunumba South and Kpandai District Assemblies to interact with staff and people to know their problems and concerns.

The decision by the officials of the ministry to be in the region, is to take local governance to the doorsteps of the people, and make themselves availble and accessible, while they take the opportunity to inspect on-going development projects, and commission completed projects in the regions.

He reminded the Nayiri of the upcoming District Assembly level Elections which he termed as one of the crucial elections used to promote development at the district level.

Mr Debrah also explained government's determination to promote environmental and public health, by introducing the National Sanitation Day (NSD) Campaign, to change the attitude of the citizenry towards the indiscriminate dumping of refuse, and the regular cleaning of our environmets.

He said President John Dramani Mahama in his efforts to reduce poverty is creating an enabling environment through his Ministry to promote Small and Medium Entreprises (SMEs), by providing them with credit facilities to expand their businesses, in order to improve their standards of living.

The Minister also mentioned that the ministry was providing 20,000 boreholes and biofil toilets to households and institutions and communities which lacked the facilities, to enhance water supply and also put a stop to open defecation.

He assured the Nayiri that the ministry will provide five of the boreholes to him at his choice of location in the district, and will also give 250 litter bins to him for distribution to clean the traditional seat of Mamprugu.

Addresssing the staff of the East Mamprusi District Assembly Mr Debrah urged them to put the interest of mother Ghana first and promote government programmes to ensure development.

He said the responsibility of public officials is to promote the image and uphold the the vitues of the country to ensure probity, acountability and transparency which bring about development.

The Minister also addressed students of the Gambaga College of Education and Gambaga Girls Senior High School, where he asked them to regularly clean their environments, to promote environmental health and sanitation.

The students appealed to the Minister to the discuss with the Ministry of Education to adaopt the College into the government mainstream of colleges, whichwill ensure infrastructural development in the college.

He inspected an on-going Dinning Hall project and a 800-capacity Dormitory project at the Girls school also provided by the Ghana Education Trust Fund.

At Wungu, Mr Debrah assured the chief of providing two toilets facilities, and two boreholes to improve water supply in the area.

The Chief, Wungu Naaba Adam Sulemana, urged the Minister to facilitate the process of getting the West Mamprusi a District Chief Executive (DCE) to steer the affairs of the district which will ensure development.

He expressed his appreciation to government for awarding the road that links Wungu and Walewale.

Nayiri Sheriga reiterated the Mamprugu area commitment to promoting peace in complimenting government efforts to bring development to the area.

He added that peace was paramount in development, and that the people of the area should continue to pray for government and Ghana as a whole for peace and unity.

Alhaji Limuna said one of the paramount things that triggered the Local Government Ministry to institute the NSD campaign was the outbreak of diseases like Cholera,   and that the campaign should not be politicised by any political opponent, adding," death does not know anybody."

Mr Adam Imoro, DCE for East Mamprusi recounted a number of projects iniatiated by government to improve the living conditions of the people, and urged the people to co-operate with the Assembly in order to develop the district.