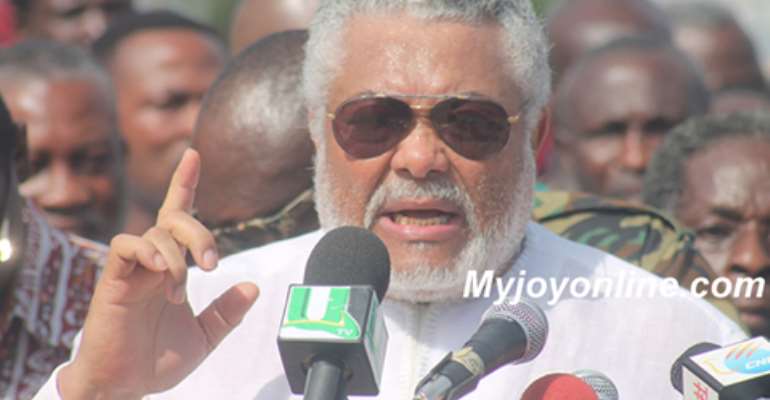 Member of Parliament for Obuasi South Kweku Kwarteng has described as ridiculous comment by ex-president John Rawlings that the redenomination of the cedi under the erstwhile Kufuor administration is to blame for the current economic crisis the country is going through.

The MP said the comment was uninformed and should not have come from an ex-president who has spent 19 years in government.

The commemoration was not without controversy as the ex-president among other things accused the Kufuor government of corruption.

He also blamed the current economic crisis on the decision by the Kufuor government to redominate the country's currency in 2007.

He challenged the NPP to declare what it did with old currency after it was phased out.

But Kweku Kwarteng who in 2007 was the government spokesperson on finance said redenomination cannot possibly be the reason behind Ghana's worsening economic challenges.

He said the redenomination was only to reduce the bulkiness of Ghana's currency.

Kweku Kwarteng said by law it is only the Bank of Ghana that decides what to do with currencies that are no longer in use, a decision an executive government cannot be held responsible for.

"The Bank of Ghana is responsible for disposing off the currencies and not the executive.

"After 19 years in government, this basic point cannot be lost on him [Jerry Rawlings]" he said.

Kweku Kwarteng said economic gurus some of whom are part of the NDC government have diagnosed the challenges facing the economy and none of them have mentioned redenomination.

He said the country is better off directing its energies towards addressing key issues of national importance rather than responding to the effusions of the ex-president.

He was quick to add that the "murderous" June 4 must not be celebrated by anybody because it is an occasion that resurrects bitterness among sections of Ghanaians.

You spent GHS25m on tree planting 'k3k3' while free SHS suff...
5 minutes ago

The murder of police officer is a wisdom-trigger to support ...
30 minutes ago