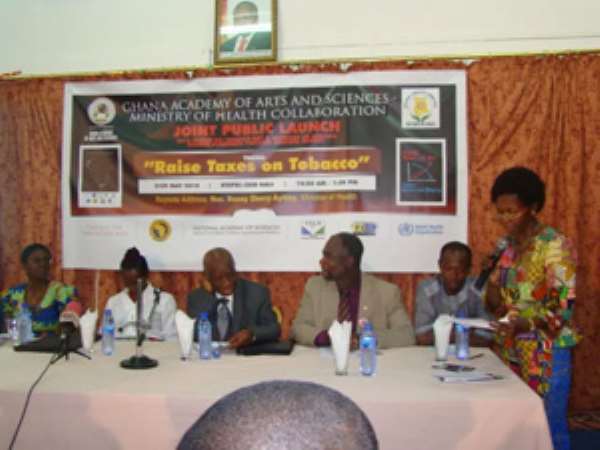 Sherry Ayittey(2nd left) with dignitaries at the event

The Minister of Health, Sherry Ayitey, has called for increased taxes on tobacco as a means of reducing the consumption of the product in the country.

She said the adoption of higher taxes on tobacco is the most effective way to encourage users to stop patronising tobacco.

She noted that although taxes on tobacco in Ghana are of the highest in the Economic Community of West Africa (ECOWAS) sub-region, prices of cigarettes still remained low.

Ms Ayittey made this call at the joint launch of the World No Tobacco Day and the Network of African Sciences Academies (NASA) Report in Accra on the theme: 'Raise Tobacco Taxes'.

The celebration, commemorated globally on May 31, was organised by the Ministry of Health and the Ghana Academy of Arts and Sciences (GAAS).

Giving the keynote address, Ms Ayittey said the country would have to consider replacing the existing ad valorem taxation of tobacco with a specific tax in the form of an excise stamp indexed on inflation and affixed to each ready-for-consumption pocket.

According to her, 'It is important to take a second look at the Free-Zone Act to ensure that all tobacco products are subjected to a single customs' duty rate and also remove duty exemptions on tobacco products regardless of their origin.'

She said the Health Ministry would soon finalise the tobacco cessation guidelines preparation with the support of the World Health Organisation (WHO) in order to combat the menace in the country.

She is concerned because about five million people die from tobacco-related diseases worldwide every year, with two million of these occurring in Africa.

She stated that reports suggested that if tobacco smoking is not checked, it could escalate into an even bigger problem.

At the current rate, 'by 2030, tobacco-related deaths will reach 10 million, with 70 per cent taking place in developing countries.'

Prof Allotey also urged African policy makers, leaders and governments to use evidences in the report to design tobacco prevention and control strategies.

'I am optimistic that our government will act swiftly and decisively on the recommendations to avert a tobacco use epidemic before it occurs,' he said.