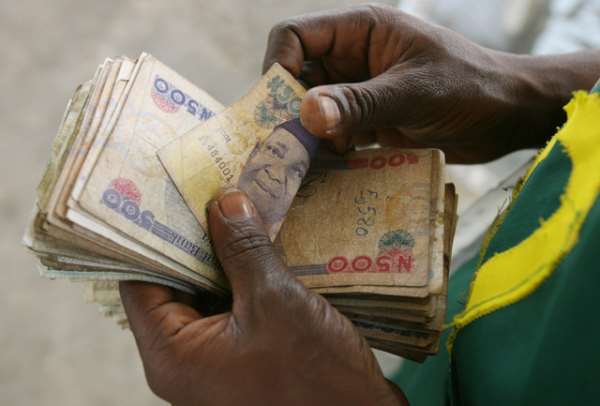 'The longest road you're going to have to walk is from here to here.

Let me first issue a caveat, I am not a finance expert, an economist, or auditor, I am not a banker, I have not held the post of cashier, or treasurer. My mathematics is poor, but I know one plus one is equal to two. I also know money magic when I see one...and my admonition for this week is on some of the magic of money in 2013 in Nigeria.

But first let me tell us this story.
It's a slow day in little Tensleep, Wyoming. The sun is beating down, and the streets are deserted. Times are tough, everybody is in debt, and everybody lives on credit...

On this particular day a rich tourist from back east is driving through town. He stops at the motel and lays a $100 bill on the desk saying he wants to inspect the rooms upstairs in order to pick one to spend the night.

As soon as the man walks upstairs, the owner grabs the bill and runs next door to pay his debt to the butcher.

The guy at the Farmer's Co-op takes the $100 and runs to pay his debt to the local prostitute, who has also been facing hard times and has had to offer her "services" on credit.

The hooker (prostitute) rushes to the hotel and pays off her room bill with the hotel owner.

The hotel proprietor then places the $100 back on the counter so the rich traveler will not suspect anything.

At that moment the traveler comes down the stairs, picks up the $100 bill, states that the rooms are not satisfactory, pockets the money, and leaves town.

No one produced anything. No one earned anything.
However, the whole town is now out of debt and now looks to the future with a lot more optimism.

Madam Coordinating Minister for Economic Planning and Finance and de facto president Ngozi Iweala presented some N4.6trillion as budget for 2014 last week. And again as she spoke of job creation, agriculture, housing and had smiles--we look to 2014 with optimism?

That she presented it on behalf of the president is no news, or that there was another hassle before the National Assembly agreed on the oil benchmark for it, is not information to most of us.

That in my generation I am seeing trillions expended, is a little news, I never thought it did be this soon. Add that to the fact that the budget proper would pass somewhere in march/april and disbursement around may/june is now the norm.

This year some parastatals got their budget for this year, in October, some, only last month, and then others still waiting. Don't ask me how they ran their operations--whichever way, money no miss.

After the initial $49.8 billion alleged missing, Sanusi the CBN chief said he erred, only $12billion was found to have been a 'shortfall' in the oil fund remittance. Ngozi Iweala says it is 'only' $10.8billion that was yet to be 'reconciled'. So $1.2billion is the 'outstanding', money no miss.

Do we remember the N58billion that was hidden funds diverted by MDAs. Monies that was supposed to be paid into the consolidated revenue fund. It was diverted and hidden, money no miss.

Only few weeks back, between the office of the Secretary to the Government of the Federation and Labaran Maku N100.561billion could not be accounted for. Money no miss.

Infact accountants at the Ministry for Information say they have no records for N4.6billion vote. Records maybe missing, but money no miss.

How about the SURE-P N500billion that went 'awol' according to Senate. Well the Senate couldn't find it, but money no miss.

Have you seen the 50 questions on our economy that Ngozi must answer according to the House of Rep. Member, it is the same questions she's answered one way or the other, somewhere, at some point. The monies have been shared--money no miss.

The point of my admonition is we cannot afford to be on the same track, where several millions, billions just disappear. Where monies are dispensed and there's nothing to show for.

In 2013, billions were shared via the federation account and very little to show in development. A small community has a councillor, chairman, a state legislator, a governor, a senator, a representative, and the president, in some cases, this community may have the honour or a minister for water resources as their daughter. Yet for all the billions, the community has no portable water. Well, they are not complaining, so like Fela put it...money no miss.

We need to get over the Nigeria is broke, Mr. President rang the bell at the New York Exchange argument. All the EFCC is broke, we are not broke stories need to be sorted out.

The strange cases of local government workers' salaries being owed for months, same as teachers must be treated.

Nigerians need to get tired of seeing their monies in luxury cars and homes, and lifestyles of those who claim to be their leaders. While millions can't be put in healthcare or for doctors and nurses.

Gov. Rotimi Amaechi could not have put it better, "we steal because people don't stone us". I dare add, they steal because we don't notice that money is missing.

I have purposely left out the millions missing in virtually every state, including Amaechi's state. I have not touched the pension billions, or the constituency project fraud--allowances, per diems and more that no one has records of. Simply because when the traveler comes down the stairs, picks up the $100 bill, states that the rooms are not satisfactory, pockets the money, and leaves town.

No one produced anything. No one earned anything, its just from here to here, but for how long we will pretend that money no miss--only time will tell.