Searching for the last lions in Nigeria 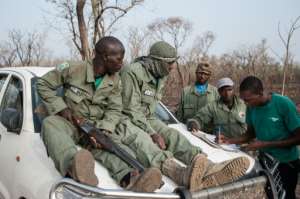 From the white Toyota Hilux, its sides lacerated by branches, the 31-year-old researcher from the republic of Benin plays the tormented sound of a distressed buffalo calf over a megaphone.

In theory, the lions are supposed to hear the buffalo and come for an easy meal. Then Kiki would shine a floodlight on the hungry, nocturnal cats and count them for a population estimate.

But despite broadcasting 29 hours of calls and trekking 150 kilometres (more than 90 miles) through Yankari looking for tracks, Kiki hasn't seen one lion yet. Not even a paw print.

"I expected to see more than this," Kiki told AFP in the heart of the reserve, an expanse of savannah the size of Luxembourg in Nigeria's northeast, dubbed the country's "richest wildlife oasis".

"The situation has become worse. There has been no response, no tracks," he said, inadvertently likening the situation to one of the darkest scenes from Disney's "The Lion King", when the protagonist's pride is overrun by a pack of mangy scavengers.

There are only two areas in Nigeria home to lions: Kainji Lake National Park, in the northwest, where some 30 cats are living, and Yankari, where researchers believe there are just under five.

The numbers for West Africa are equally dire, with just 400 lions remaining in the region, according to the International Union for Conservation of Nature (IUCN), out of a total population of 20,000 lions living in the wild around the world.

"When we started our first comprehensive West Africa lion survey in 2009, lions had already lost 99 per cent of their West African range," said Philipp Henschel, a survey coordinator at the lion conservation organisation Panthera.

There is no simple solution to saving the West African lions, whose males have shorter manes than their southern counterparts, and in December were listed as endangered by the US Fish and Wildlife Service.

With chronic mismanagement in the past and underfunding, Yankari today is struggling to attract the funds it needs to preserve its last lions.

In contrast, most West African parks with lions operate on a budget of just $36 per square kilometre.

"Yankari is one of the few areas where fencing makes sense because the situation is so urgent," said Henschel, speaking from Libreville.

To protect the animals and allow rangers to patrol more efficiently, fences need to be built around the perimeter of the park, he added.

"We know how to conserve cats," he said. "We just need money to do it."

Kiki has to go through the whole park for his surveys, even though he knows that in the searing heat of March, when there is no rain, the lions are probably closer to the river to hunt thirsty prey.

Bloody skirmishes are common, so Kiki is escorted at all times by six armed rangers, who have had to defend him more than once during his buffalo calls.

"We shot to scare them but instead of them trying to run away, they shot us," he laughed before adding more seriously: "I used to like camping in the bush but now I think it's too dangerous."

By the end of his trip, it's clear Kiki's survey will only serve to document the last lions living in Nigeria unless a dramatic conservation effort is put in place -- and fast.

"You know when you are standing on the same ground as the lion, you feel how strong they are, you can feel your heart beating. You really feel that this is the king of the jungle," he said.

"But not in Yankari. Here you can only see lions in pictures."