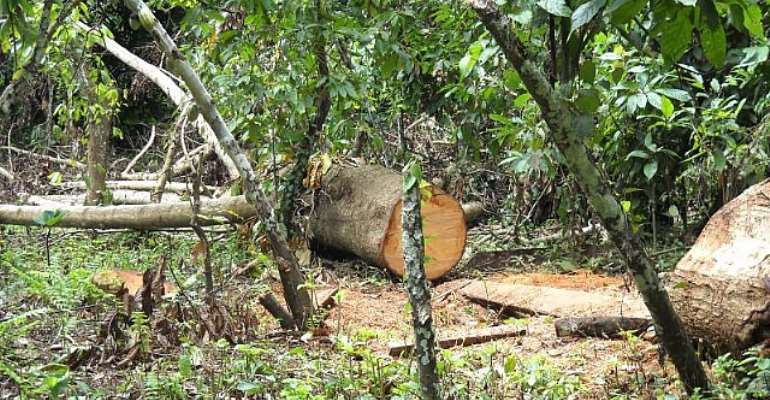 The country risks losing about 90 per cent of its cocoa farms if it does not take adequate action to regain farmlands given out as concessions for logging.

This is because almost all the cocoa farms, which are mostly located in parts of the Brong Ahafo, Eastern and Ashanti regions, have been licensed by the Lands Commission as areas demarcated for logging by chainsaw operators.

The platform is an initiative of the board and Mondelez Cocoa Life, aimed at ensuring sustainability in the production of cocoa in the country.

The membership of the committee cuts across all sectors in the cocoa industry, including the UNDP, Lands Commission, Forestry Commission, Licensed Cocoa Buyers Association of Ghana (LICOBAG) and the ministries of Finance and Lands and Natural Resources.

The COCOBOD CEO is the chairman of the steering committee.

Dr Fofie told the paper that the board, which regulates the cocoa industry, sees the giving out of cocoa farmlands for logging as a serious challenge that had implications for the sector and the livelihoods of cocoa farmers.

'It's a very serious issue; almost all our cocoa farms are given out as concessions and with that the operators can get up one day and start clearing those lands for timber with some little compensation or even no compensation paid to the farmer. That, to us, is a serious challenge for the cocoa sector,' Dr Fofie, who is the chairman of the committee, told the paper after it was inaugurated.

Ministry confirms
The Technical Director in charge of Forestry at the Ministry of Lands and Natural Resources, Mr Musah Abu-Juam, confirmed the development in a separate interview but added that the ministry and Lands Commission would work with COCOBOD to help resolve the challenge.

'Let me be frank with you; we see cocoa to be accounting for over 50 per cent of the deforestation menace in the country. Much of the land degradation and encroachment of forested land that we talk about is caused by the cocoa farmers,' Mr Abu-Juam, who is representing the ministry on the committee, said.

He, however, admitted that the ministry and its agencies considered cocoa as the backbone of the country and would, therefore, not do anything that would limit cocoa output in subsequent years.

He explained that the ministry, together with COCOBOD, was encouraging the farmers to plant other trees, especially the commercial ones, in addition to the cocoa in their farms as a way of helping in the afforestation effort.

'We also encourage them to grow varieties that require small land space but have high-yielding capacity,' he added.

On the measures being explored to help address the issue, the CEO of COCOBOD said his outfit was looking at ways that will help make cocoa farmers bonafide owners of the respective farmlands.

'We are trying to encourage them to also plant some of the trees that are needed for timber and later own it. The challenge, however, is they have to register with the Forestry Commission and we are working on all that,' he added.

About GCP
Mrs Rita Owus-Amankwa, who is the Project Coordinator of the Cocoa Platform, explained prior to the inauguration of the steering committee that the initiative was aimed at ensuring the sustainability of the cocoa industry in the country.

She said it would, among other things, serve as a one-stop shop to the various policies and programmes on the cocoa sector.

'There are so many cocoa programmes in the country but the question is; how well are we coordinating those programmes to ensure that they benefit the industry and farmer? What this platform seeks to do is to see how we can strengthen these policies and also advocate for the industry,' she added.

The platform currently has a funding gap of US$849,105 and Mrs Owus-Amankwa, who is also the Secretary of the Steering Committee, was optimistic that stakeholders in the cocoa industry would come to its aid.