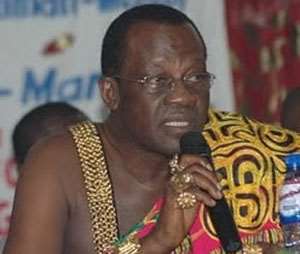 I was waiting for a response from the relevant authority and/or leadership regarding the latest internal dispute among the New Dwaben chieftains at loggerheads with their traditional overlord, before making any comments and/or observations on the matter. It is, however, quite in order to note, at least in passing, that the Koforidua-Dwaben chieftaincy dispute has been brewing for sometime now. Where I come into all this, though, is in respect of the fact of hailing from Akyem-Nkronso, and the royal stoolhouse that has been historically charged with the custody of the Aduana Stool Lands of Akyem-Abuakwa.

Actually, we are the custodians of the entire Akyem-Abuakwa Stool Lands, not just Aduana Stool Lands. At any rate, I specifically mentioned Aduana Stool Lands because recently, I was serendipitously apprised of the fact that even the very land on which the Great Asona Clan of Okyeman is headquartered, Kyebi, to be exact, is Aduana landed property. This makes perfect sense, because there was first and foremost the Aduana Royal Clan of Akwamu before the Asona Clan from Adansi arrived and overran the rest of us.

The preceding notwithstanding, I am inextricably and ineluctably invested and implicated in both great Akan clans by consanguinity, just as I am also equally and inescapably implicated in both the Asante-Dwaben and Kumasi Ayoko clans, as well as the Asona Clan of Asante-Dwaben. In essence, I guess what I am trying to say here is that any observations that I make in this article, vis-a-vis the New Dwaben chieftaincy dispute, ought not to be viewed with any prejudice against any Akan chieftain or potentate whatsoever. I am only attempting to square up the fundamental facts of history, with the ultimate hope of the prevalence of peace and harmony among the great community of the Akan people of Ghana and elsewhere around the globe.

Indeed, when Daasebre Oti-Boateng, the Omanhene, or Paramount Chief, of the New Juaben Traditional Area, asserts that his sub-polity is autonomous and devoid of the suzerainty of the Asantehene, his observation is incontestable. What Daasebre Oti-Boateng is obligated to have also acknowledged is the fact that New Juaben's landed property is a temporally open-ended rented property belonging to Akyem-Abuakwa, whose chief custodial symbol is the Okyenhene. It is an "open-ended rented property" because while our kinsmen and women are highly unlikely to be ever evicted from the land, nevertheless, every year there is a token symbol of rental payment due Ofori-Panyin Fie, at Kyebi, from the New Dwaben Omanhene, of Koforidua.

The last time that I checked, which was nearly some three decades ago, the rental payment was C 1 (One Ghana[ian] Cedi, so-called). I hope that inflationary trend has caused the latter token of rental payment to be considerably upped, if only to make Daasebre Oti-Boateng's ritual annual trips to Kyebi worthwhile to both tenant and landlord. I also vividly recall the legal wranglings that occurred between Daasebre Kwaku Boateng, the late New Dwaben Omanhene and the Okyenhene, the late Osagyefuo Nana Ofori-Atta III, over the cantankerous refusal of the former to contractually satisfy this largely symbolic gesture, on the rather quaint grounds that modernity dictated the summary abrogation of this symbolic certification and perennial reminder of the bloody Asante civil wars, twice in the nineteenth century, whose apocalyptic bloodiness rivalled their postcolonial versions in Rwanda, Burundi, Cote d'Ivoire, Sierra Leone and Liberia, in recent memory.

At any rate, it clearly appears that the New Dwaben subchiefs who are calling for the destoolment of Daasebre Oti-Boateng tragically have absolutely no remarkable appreciation of the causes and factors that prompted a moiety, or approximately half, of the population of the old Asante Dwaben to relocate to its present abode. I personally lost quite a significant number of my ancestors in both wars of unpardonable internecine and familial bloodletting, including Nana Onwona Asubonteng, of the Dwaben Asona Clan. Else, these disgruntled New Juaben chieftains would not have appealed to the Asantehene to intervene.

I have also often wondered why my Kyebi and Asiakwa ancetsors had not caused the immediate integration of the New Juabenites into Okyeman society and sub-polity since, even as we speak - or rather, even as I write - a sizeable percentage of Akyem-Abuakwa is composed of old Dwaben exiles and deportees. Dr. J. B. Danquah once definitively answered this question in the introduction to his landmark political and legal treatise Akan Laws And Customs, And The Akyem-Abuakwa Constitution, by tersely observing that Akyem people are innately Republican in both ideological and behavioral orientation, and abhor imperialist leadership of any kind. What, in essence, the Doyen of Gold Coast and Ghanaian Politics was clearly, albeit obliquely, implying is that the Akyem are immutably averse to the sort of chieftaincy authority for which the New Juaben chiefs seeking the destoolment of Daasebre Oti-Boateng are clamoring.

I am quite certain that the Eastern Regional House of Chiefs contains legally and customarily qualified experts to facilitate the resolution of the latest internal hostilities roiling the harmony and balance of the New Juaben State.