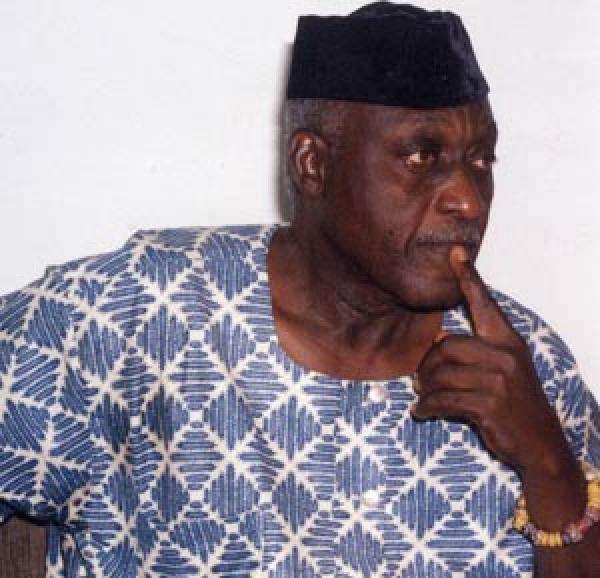 The dedication page to Kofi Awoonor's The Ghana Revolution: Background Account from a Personal Perspective (Bronx, New York: Oases Publishers, 1984) reads as follows: "Dedicated to the Memory of all those/ who died in the years of struggle/ against oppression and tyranny./ To the many who died in the cells during/ Acheampong's rule./ To Ebenezer Allotey who did not survive/ the nightmare./ To Jerry, Kodjo, Mike, CKM, Appianing,/ Fabian, Tsatsu, Fui,/ Kwesi Botchway, Aki, Gulam, / Courage, Wallace and all those who/ struggle for a better tomorrow."

Needless to say, this list of "dedicated" freedom fighters whom Awoonor would have his readers, and the rest of the world, believe to have gallantly fought against the "oppression and tyranny" imposed on Ghanaians by Gen. Ignatius Kutu Acheampong, from 1972 to 1978, is largely composed of Anlo-Ewe tribal nationalists, including Dr. Kwesi Botchway, of course. And so it clearly appears that Awoonor brazenly and unabashedly envisaged his Ewe tribesmen to be specially endowed with the human instinct and flair for freedom in a much greater manner than almost all the other non-Ewe ethnic sub-polities within the geopolitical confines of postcolonial Ghana.

The critical question of whether, indeed, these rascally cast of characters were "freedom fighters" and the champions of a "better tomorrow," as the author of The Ghana Revolution wants his readers and audience to believe, will be critically and extensively examined and discussed in due course. Thirty years of political domination by Anlo-Ewes of Ghana ought to provide us with more than adequate grist for a comparative analysis between the six years of Gen. Acheampong's junta and the nineteen years of Flt.-Lt. Jerry John Rawlings' regimes of the so-called Provisional National Defense Council (PNDC) and the National Democratic Congress (NDC).

We shall also examine the three "retributive months" that the Rawlings-led Armed Forces Revolutionary Council (AFRC) held the reins of governance under the guise of that junta's so-called House-Cleaning Exercise. Indeed, when Awoonor talks of "Memory," it is not clear precisely what the Chief Diplomat and foremost political and ideological propagandist for Mr. Rawlings means. And while we do not claim to have any edge or monopoly over "Memory" as an evidentiary mechanism of recall and/or documentation of "facts" and "truths," nevertheless, we intend to determine to what extent the use of that most protean of the human cranial faculties is purely the figment of the cynical imagination of the author and his fellow "revolutionary" truckers and purveyors of rancor and enmity in post-Third Republican Ghanaian society.

The "Preface" of Awoonor's Ghana Revolution also tells more about the sinister mindset of the writer than the stark facts of what it purports to depict: which is that the brutal butchery engineered by the key operatives of the so-called Rawlings Revolution was an indispensable psycho-social and political therapy for the leadership of a decadent nation that was irreparably mired in corruption, whose necessary cauterization had been auspiciously answered by the god-send creation of "a young airforce officer" by the name of Jerry Rawlings. The book itself is rather badly written and poorly edited; but this is no grievance of moment, as many a personally invested propaganda piece is of strikingly the same markings.

The clear aim of the author, of course, is to shamelessly and unconscionably justify the morally untenable by making the latter seem to be inescapably prophetic and inevitable. Of the June 4, 1979 bloody putsch that catapulted a virtually unknown Flt.-Lt. Jerry John Rawlings into the center of postcolonial Ghanaian political culture, this is what Awoonor has to observe: "Since he assumed the Presidency of Ghana on September 21st, 1979, Dr. Hilla Limann had been periodically worried about the Ghanaian Armed Forces. His worries were based on the fact that the army had produced a young airforce officer, Jerry Rawlings, who, [sic] came out of a guardroom, seized power with the help of the ranks, and conducted a swift clinical surgery of the cancer that had bothered the nation in the shape of criminal generals, with their cohorts of leeches. June 4, 1979 has become written into [sic] the annals of Ghana's history. It has stamped, through blood and gunfire, ineradicable lessons for those who will seek to run the affairs of Ghana" (Ghana Revolution 9).

A very curiously interesting observation, if there ever were any such phenomenon. For starters, anybody who has studiously followed the general trend of Ghanaian politics over the past three decades, cannot but unreservedly conclude that nothing has essentially changed in terms of rank corruption at the highest levels of government. Actually, the state and levels of corruption have gotten worse now than at anytime during the Acheampong tenure, for whose perceived abominable blight the latter was summarily executed by firing squad. What has occurred, as a matter of objective reality and truth, is that one set of abjectly corrupt leadership has replaced another, with Mr. Rawlings comfortably ensconced amidst it all, while also quizzically and paradoxically pretending to have conducted himself above reproach.

Indeed, so absurd is the entire scenario as to make the infamous Butcher-of-Sogakope smugly envisage himself as the moral template or gold-standard of Ghanaian leadership. Whatever "ineradicable lessons" it is that the former airforce flight-lieutenant may have brought to bear on our national political culture cannot be edifying, or morally instructive, in any positive and/or constructive manner. At best, the lesson that the so-called Rawlings Revolution teaches is that even the most well-intentioned illusions do not necessarily constructive visions make. Consequently, even as of this writing (10/9/13), the now-retired President Jerry John Rawlings was widely reported by the Ghanaian media to be bitterly lamenting the fact of the key operatives of his own political party, the so-called National Democratic Congress (NDC), being largely composed of the most corrupt and incompetent leaders in the history of postcolonial Ghana.

It is not clear whether this is exactly what the author of The Ghana Revolution wants critical readers like the present writer to believe, but Awoonor is dead-accurate in observing that the period between the bloody mutiny of June 4, 1979 and the handing over of power to President Limann's People National Party (PNP), constituted the most politically chaotic moment in the country's postcolonial history. What is grossly inaccurate is the author's rather oversized contention that the preceding notwithstanding, the Rawlings-led AFRC junta, somehow, "...steadily clarified [for the country] the essential elements of [Ghana's] recent past" (9).

To be certain, the country had been rife with corruption as Awoonor maintains; however, at absolutely no time had the people required any direction or counsel from Flt.-Lt. Rawlings and his henchmen who clearly did not seem to be possessed of any remarkable appreciation of how the economy of a postcolonial constitutional democracy was run. And to be certain, the three months during which period the AFRC ruled by edicts and fiats had witnessed acute scarcity of "essential commodities" in the country's markets and shops. The latter dismal state of affairs had been primarily due to the scandalously naive decision of the junta leaders to capriciously dictate prices of basic consumer items like soap, milk and rice, just a little of which the country domestically produced.

In sum, the very elementary concept of supply-and-demand clearly appeared to lie well beyond the stunted imagination and shallow intellectual capacity of the junta operatives. The deleterious impact of such one-sided populist and blind consumerist thinking was what Dr. Limann and his far more intellectually sophisticated associates walked into on September 21, 1979, when the AFRC handed to them the reins of governance. Both socioculturally and economically, Dr. Limann's PNP administrators had walked into a veritable minefield. The rank "revolutionary" culture of abject disrespect for authority and legitimately constituted leadership - both contemporary and precolonial - fomented by Mr. Rawlings' junta almost inevitably guaranteed that Dr. Limann would be governing in a state of virtual anarchy.

And as a civilian and democratically elected leader, the urbane career diplomat, unlike the much younger rambunctious soldier who had voluntarily ceded him the reins of governance, could not rule by edict. And declaring a state-of-emergency so as to enable him assume totalitarian powers, even in the short-term, as a strategically savvy means of stabilizing the country, was simply out of the question.

For not only would such a constructive leadership alternative be flagrantly unconstitutional and diametrically out of synch with the liberal temperament of the Western-educated Dr. Limann, his adamant refusal to heed repeated warnings from the country's security agencies to put the involuntarily retired thirtysomething-year-old Flt.-Lt. Rawlings, and the bulk of his June 4 gang members, on the radar and a leash for close observation and discipline would shortly become the undoing of the Limann government.

On the bread-and-butter side, perhaps Dr. Limann ought to have painstakingly educated the young idealistic soldier on the dynamic intricacies of the national economy and, more importantly, got him to sign an official compact of forebearance while the more mature and intellectually astute, and democratically elected, leader attempted to get the badly battered economy back on an even keel. Nearly a decade of grossly incompetent military stranglehold on the country's fragile pre-oil economy, and the deleterious effects thereof, was highly unlikely to be reversed in a matter of months, let alone talk of putting the nation's balance of payments in the black.

The preceding is incontrovertibly what constitutes the tragic narrative of the Limann government; and not the largely superficial Rawlings-apotheosizing fluff purveyed by Awoonor in the latter's "personal perspective" on the author's so-called Ghana Revolution, as shall be more expansively argued in due course.