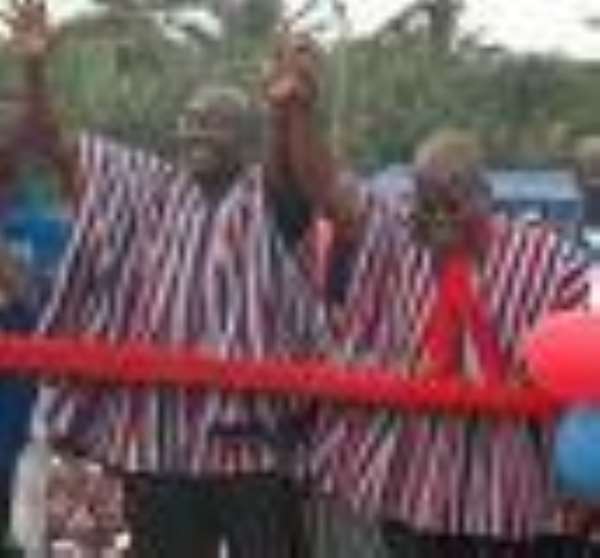 Like so many Ghanaians in and out of the country, I have followed the NPP election petition keenly and very closely. As we enter what is probably the last week of this petition, I am sure that everyone is anxious about the outcome. I have never been a supporter of Akufo-Addo; I must also confessed I, like many Ghanaians have previously 'bought in' the propaganda that, the man Akufo-Addo is violent and not capable of ruling Ghana for all Ghanaians. However, since I have never met the man personally, his attendance to the court was my opportunity to observe him in action and to make for myself the truth or otherwise of all that was said and written about him and thanks to the zooming lenses of GTV coverage of 2012 election, I had my 'one-to-one' with the great man albeit courtesy GTV.

For the past five or so months, I have humbly observed the humility of the first petitioner (Nana Addo Dankwa Akufo-Addo); His respectful silence throughout the process at the Supreme Court must be commended by all Ghanaians. In Mr Akufo-Addo, I have observed a very powerful man with very large followers throughout the country and yet, humbly take his seat daily with ordinary Ghanaians to listen to the evidence his lawyers brought to the court. His demeanour in the court should aspire us all.

In court I observed the courage, humility, and respect shown to the Supreme Court by Nana Akufo-Addo as he fought for justice for his supporters. I have greatly admired the grace and humility that he exuded throughout this entire historic petition. For him, the day of judgement in the courtroom will be a very difficult day and I certainly will say a prayer for him when that day comes. Insha Allah

Even with this important day coming soon, I will like Nana Akufo-Addo to remind himself that he has already exposed a tremendous amount of irregularity before, during and after the 2012 election. All WE ever asked for was for equal playing field for all political parties contesting the 2012 election in Ghana. If President John Mahama had rights to be president, so did Nana Akufo-Addo. And that is why the announcement of John Mahama has the winner by the Electoral Commission is being properly and legally contested at the Supreme Court by the NPP.

The legality and fairness of President Mahama election will soon be judged by our supreme court, and that is the best Nana Akufo-Addo can do. Whatever decision the Supreme Court makes, is a decision that we must all live with, whether we like it or not.

Whether President John Mahama is ruled to have been legally and properly elected or not by the Supreme Court, I am firm believer that Ghana will be the winner and our democracy will ultimately be stronger and fairer as a result of this petition. However, if President John Mahama, is ruled to have been properly elected despite all the alleged irregularities, I will understand that some people will be very disturbed and sad, but we must remember the mission that drove Nana Akufo-Addo to choose the path of courtroom justice instead of the Cheaper street justice available to him (read: 'Akufo-Addo is a cheap politician': by Gabby Otchere Daako).

As I have heard Dr Bawumia say time and time again in the courtroom that they are not only fighting to rule Ghana, they are fighting for the development of democracy in Ghana, especially those Ghanaians who have to live through the misery of queuing for hours to vote for their chosen leader and the sadness that comes with the realisation that their votes have been subverted through irregularity.

The petitioners inspiring leadership in resorting to the court system and the revelations from the courtroom has already led to soul searching by all Ghanaians about the conduct of the election in 2012.That is an incredible accomplishment. That is the mission the NPP and all political parties must continue after this petition is over. Led by the heroism of Nana Akufo-Addo, we will support his efforts to not only make our election open, transparent and participatory, but also repeal all laws that allow parties in power to abuse the power of incumbency to manipulate election outcomes.

And I hope Nana Akufo-Addo will use his leadership to support the calls for national healing process to bring us all together in the spirit of 'Ghana First'.

Whatever, irregularities unearthed during this election petition is and should be in the past after the verdict. It is the future elections that need to be protected and everyone who stood up for this election petition plays a part in that protection. If we failed to protect the integrity of 2012 election on 8/9th December, 2012, we must pledge to never make that mistake again.

Never should we stop fighting for fairer, open, participatory and free elections, whether John Mahama was ruled to have been properly elected or not, our work will never be done!

For me and thanks largely to TV observation of Akufo-Addo, I have come to a personal conclusion that, Nana Akufo-Addo may be many things but violent is not one and if you are looking to release violent after the verdict of the supreme court, then don't expect any support from NANA AKUFO-ADDO.

I haven’t said NPP is Majority in Parliament – Bagbin clarif...
47 minutes ago