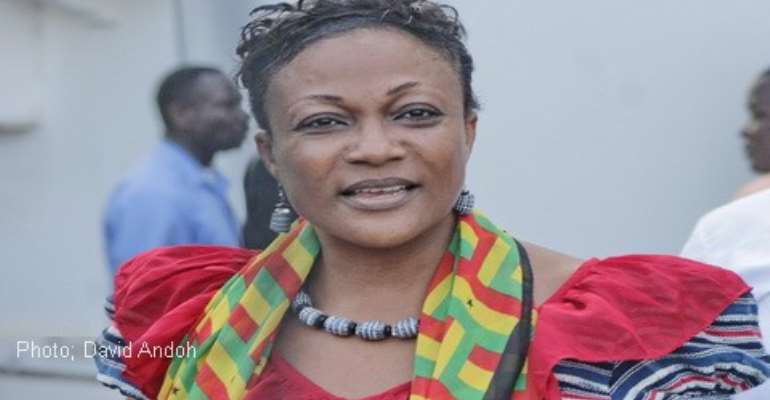 The National Women's Organizer of the opposition New Patriotic Party (NPP), Otiko Afisa Djaba has descended heavily on some senior members of the party for ignoring laid down rules and waging a media war against the leaders and structures of the party.

She has singled out Dr. Nyaho Nyaho-Tamakloe, Dr. Arthur Kennedy and Dr. Charles Wereko-Brobby for what she describes as their attempts to run the party and many of its leaders into the ground for their parochial aims.

“God will punish such people” she has declared.
Speaking Monday on Adom FM's “Dwaso Nsem” morning show Otiko Djaba noted that it is wrong for any true member of the NPP to use the media to address internal party concerns.

Her remarks were in reaction to statements by Dr. Nyaho-Tamakloe and Dr Arthur Kennedy about the fate of the party's General Secretary, Kwadwo Owusu Afriyie after he was fined by the Supreme Court for intentional criminal contempt.

The two outspoken NPP gurus have openly expressed disappointment about the party's failure to sanction Sir John after he was convicted by the Supreme Court for contempt.

Dr. Nyaho Tamakloe demanded the resignation of Kwadwo Owusu Afriyie as party General Secretary because he had brought the name of the party into disrepute.

Going a step further, Dr. Arthur Kennedy challenged leadership of the party to crack the disciplinary whip on everybody who has made a statement that may not have inured to the benefit of the party.

The former presidential aspirant has also publicly declared that Nana Akufo-Addo should have been sanctioned for his 'All-die-be-die' comment, even if he subsequently explained what he meant by the call for his party members to die for the cause.

Dr Charles Wereko-Brobby, also known as Tarzan, has severally criticized the party's decision to contest the results of the 2012 Presidential elections, saying it was a waste of time and resources.

Ms Djaba, who said she had had enough of the attempts to bring the party into disrepute, called on the “the so called leading members of the NPP” to stop the media war and rather use the party's internal structures to address their grievances.

She faulted Dr. Arthur Kennedy for failing to consult the party's hierarchy for their side of the story before he published his book titled “Chasing the Elephant into the Bush” which chronicled his impressions of the 2008 election campaign, for which he was Campaign Communications Director.

The NPP Women's Organiser insists that Dr Kennedy's book has been extremely damaging to the fortunes of the same party he claims to be a member of, providing unfounded propaganda ammunition for the National Democratic Congress against the NPP.

“Medical doctors by profession like Dr. Arthur Kwabena Kennedy, must rather look out for solutions to cure Malaria in the country and sanitations issues,” Afisa Djaba stressed.

On Dr. Nyaho-Tamakloe, the NPP Women's Organiser challenged the former Ambassador to Serbia to rather resign from the party for his incendiary comments over the years instead of demanding the resignation of Sir John.

Afisa Djaba said as faithful and loyal member of a great party like the opposition NPP must look out for solutions to save the party from destructions not issues that will bring the entire party into disrepute.

Former Chief Executive of the Volta River Authority, Dr Charles Wereko-Brobby, also came in for censure, with Ms Djaba wondering why he would rather attack the party he claims to love instead of inspiring party members as the nation await the Supreme Court verdict.

“God will deal with Dr. Nyaho Nyaho Tamaklo, Dr. Arthur Kennedy and Dr. Charles Wereko-Brobby for trying to destroy the NPP”, she prayed.