MMDCEs Must Be Elected! 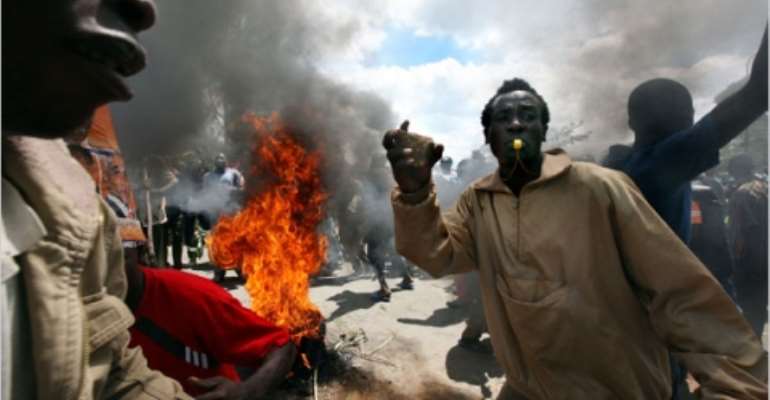 As I understand it, the rioting of the youthful hoodlums belonging to the ruling National Democratic Congress (NDC), over the appointments of metropolitan, municipal and district chief executives (MMDCEs) by the presidency, has spread to at least four regions, including the Volta, Western, Central and Northern regions. I am, here, less interested in the number of regions that have been violently affected by such youthful acts of hooliganism than the reasons that may lie behind such mayhem, both real and imagined.

What provoked me to compose this piece, however, was the reported arrests of some twenty-five rampaging supporters of the Mahama-led National Democratic Congress in the Nkwanta-North Constituency of the Volta Region.

The criminal suspects are accused of setting at least five government-owned vehicles alight, primarily because they are not in favor of Mr. Mahama's nominee for the post of Nkwanta-North District Chief Executive, Mr. Paul Levin Gyato (See "NDC Executives in Nkwanta Protest Arrest of 25 Supporters" JoyOnline.com/ Ghanaweb.com 8/4/13).

We are not given much information about the credentials and/or the professional qualifications of the nominee; and so it is rather difficult to fathom precisely what the problem may be. One facile guess may well be that Mr. Gyato is not native to either the Volta Region and/or the Nkwanta-North Contituency and District. I am, of course, fully aware that I may erroneously be interchangeably applying the geopolitical terminologies of "Constituency" and "District"; for the two descriptors are not necessarily one and the same.

Whatever be the case, what is clear here is that the protesters feel woefully disenfranchised by the Mahama presidency. They would rather that they had been consulted before Mr. Gyato's appointment was made. On the face of it, such political consultation makes quite a bit of sense in a Fourth Republican democratic dispensation. Unfortunately, the rules governing the selection and appointments of metropolitan, municipal and district chief executives have absolutely nothing democratic about them. This, however, is not to say that, in fact, most Ghanaians are not well aware of this political and administrative anomaly; for the latter bizarre state of affairs has been hotly debated in the media and copiously written about in the same. And I put the blame for the government's apparent inability and/or reluctance to resolve this matter squarely at the feet of Mr. Ato Ahwoi, one of the key operatives of the National Democratic Congress, and one who viciously seems to be stuck in the revolutionary mode and rut of yesteryear.

In the past, the eldest of the Ahwoi Boys has vehemently inveighed against the salutary democratization of the local administrative process. But that the NDC executives of the Nkwanta-North district are reportedly behind the hooligans, may yet constitute the most dangerous trend which an otherwise legitimate expression of displeasure might have taken. Indeed, even as I write (8/5/13), the Nkwanta-North NDC executives are reported to be vehemently protesting the arrests of the hooligans who are alleged to number at least twenty-five. What the latter means, of course, is that the actual number may be far more than has been reported - perhaps two or even three times more.

Whatever the case may be, the criminal suspects ought to be punished to the fullest extent of the law. Matters, however, must not be left at the level of the prosecution of these criminal suspects. Their chief sponsors and patrons, who clearly appear to be the NDC party executives of Nkwanta-North, have to be also made to face the leaden brunt of the law. For the destruction of government property, to be sharply differentiated from party property, is inescapably a treasonable offence, a felony of the most grievous proportions.

I also know for a fact that both Nkwanta-North and -South districts are heavily Akan in ethnic composition. Likewise, I am fully aware of threats of NDC takeovers whenever the parliamentary seats in these two constituencies, in particular, have been won by candidates on the ticket of the main opposition New Patriotic Party (NPP). It is also widely known that to be described as an Akan in most parts of the Ewe-dominated Volta Region, has the mark of the proverbial "Beast" attached to it.

I am not saying that, indeed, Mr. Paul Levin Gyato, the man over whose appointment as District Chief Executive of Nkwanta-North provoked the youthful hooligans into torching at least five government-owned vehicles, is of Akan or even non-Anlo-Ewe descent. What I am frontally and unabashedly implying here is that the investigators must be open to all causative possibilities.