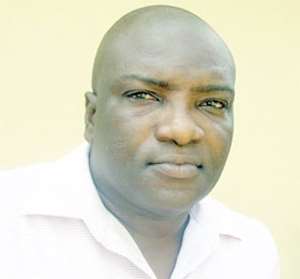 The loud-mouthed editor of the Daily Searchlight, Mr Ken Kuranchie, who has been insulting all his way to the Supreme Court (SC) finally saw the brakes put on him when the nine justices sitting on the SC petition case challenging the 2012 Presidential Election results sentenced him to 10 days in prison for showing criminal contempt to the court.

Many people knew that the gregarious, sharp-tongued and unapologetic Ken Kuranchie will meet his waterloo when he appeared before the SC in Accra on Tuesday July 2, to defend the contempt charges slapped against him by the SC for bashing the SC for banning Sammy Awuku, a Deputy Communications Director of the NPP from attending the rest of the proceedings on the petition case.

I saw it coming when Ken Kuranchie defied the SC when he was ordered to appear before it and defiantly stated that the SC should formally write to invite him. And when the SC responded by writing formally to invite Ken Kuranchie, many concluded that Ken Kuranchie was in for a real trouble.

The Searchlight Editor did not further help himself when he appeared in court with his lawyer, Mr Atta Akyea, who muddied the waters by sensing as if he was challenging the authority of the SC to invite Ken Kuranchie.

Whilst the other two culprits, Stephen Atubiga and Kwaku Boahen were begging the SC profusely, Ken Kuranchie who wants to be a stupid hero for the NPP remained defiant and made everybody in court aware that he was not going to plead for forgiveness for his unwarranted commentary on the SC proceedings.

It, therefore, came as little surprise when the court slapped a 10-day jail sentence on Ken Kuranchie who later remained subdued and was whisked away in handcuffs.

Even though Stephen Atubiga apologized to the court, he was still sentenced to 3-days in prison to serve as a deterrent to other wayward commentators on the SC proceedings.

The NDC Ashanti Regional Youth Organizer, Kwaku Boahen however escaped unhurt when the SC found him not guilty because his rebellious comments on the SC proceedings happened before the SC issued the final touchline warning.

Nobody is happy to see Kuranchie receive the harshest punishment of 10-days in prison, but this guy for reasons best known to him is one of the few people who insulted President Mills from day one when he assumed the Presidency in January 2009 till the day that he died. And Kuranchie did not stop there, but has continued his bad behaviour by insulting President Mahama at any given turn.

There is nothing about President Mahama or the NDC that excites this guy. The insults from Kuranchie's pen or finger tips know no bounds as he hates everything NDC. That was why he damned the SC last warning and chipped in for Sammy Awuku.

Ken Kuranchie is also known for describing Mr Tsatsu Tsikata with so many terrible adjectives which I would not want to amplify. It is therefore gratifying that after the next ten days, somebody will also get the guts to refer Ken Kuranchie as an ex-convict. This is a wonderful accolade he will henceforth be adding to his CV.

And I believe that the jail time will serve Kuranchie right and sober him just a little bit because this man suddenly became 'Hurricane Kuranchie' who was rolling all over the place by portraying his disdain for everybody.

Perhaps, his nickname 'Opete' matches his character trait because vultures are known for having no place to lay their heads, therefore, they cannot think through issues carefully before they act.